END_OF_DOCUMENT_TOKEN_TO_BE_REPLACED

“The multiverse, she is a cruel mistress.  For much time, things have looked up for me.  But for so long, my luck is rather dreadful.  While my poems and records will be the stuff of legends, a break from this figurative and literal hells would be quite nice too!  I preferred my luck with just the King of the Cross-Trade in Sigil.” – Ramon DeLeon, Planar Traveling Bard

Of Bards and Bad Places

While I assure you that not all planes are mortifying and deadly, I tend to have rather bad luck.  This luck has sunk even lower, finding myself in the dark planes of the fiends.  Races of creatures built from pure literal evil, formed into physical manifestations.  Only the most noble and just and survive a trek into these wretched places.  As I can assure that I’m not, I have my work truly cut out for me.

Let us discuss The Lower Planes of the Great Wheel.  This is a place for not just creatures made of evil, but the most equally evil souls that find themselves punished or harvested for the creation of more fiends.  The most worthy petitioners even gain the chance to become fiends of their own!  To make matters more hostile, each plane has its own challenges within the environments themselves.  Acidic air, dueling erupting fissures, grey murk and more await the most intrepid and foolish of explorers.

Now, where do I fit into this?  A valid question!  An attempted escape from strange realities proved rather flawed.  My grasp on the planes is quite good, within my rules of reality.  Parallel versions of the Wheel has all sorts of alterations, to say the least.  With some level of luck, this is the “true reality”, however escaping the Lower Planes proves to be far harder than expected.  Even any portals and keys that should work mysteriously fail.  Well, through narrowly dodging fiends and escaping hostile environments, I’ve found my way across the Planes Below.  Impossible as it may be, I find myself not too damaged by this.  But, a Planeswalker has already seen a lot, no?

Author’s Note: I’ve been feeling a little down, so things have slowed a bit as a result.  Plus, I junked a previous post that I couldn’t find myself completing, which slowed things down more.  My apologies.  Anyway, here is something I have been sitting on for a while.  My Look at the Planes have focused too much on Ramon flailing about and finding danger, rather than describing locations and happenings in the planes, with Ramon as your guide.  Let me change that.  Also, I figure I may as well toss out a reference to the recent adventure.  In addition, plenty of references to classic D&D lore, as well as my own mad musings.

END_OF_DOCUMENT_TOKEN_TO_BE_REPLACED 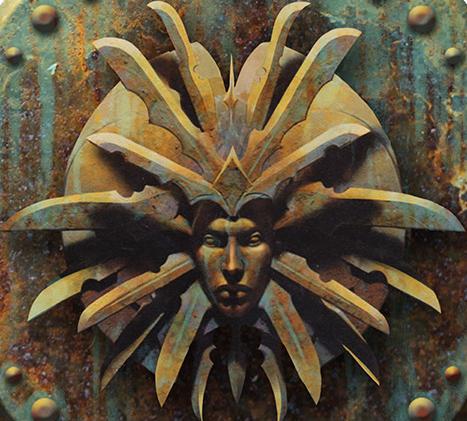 Currently, I find myself researching into the boundless possibilities of parallel universes, alternate realities if you will. Such a pursuit is a headache. But, no matter! An explorer must persevere for the good of all! Throughout all means of realities, little pockets of truly wondrous strangeness hide in their own obscure places. For the time being, let me chronicle some travels to other strange places in the multiverse!  Who knows what there is?

Author’s Note: It’s no secret, I keep coming back to the planes, especially Planescape. As always, many of these ideas are 3rd and 4th Edition concepts retrofitted into AD&D (rather than 5th Edition’s approach).  This time around, a little more Shadowfell and a bit of Elemental Chaos get reshaped to (better) fit the Great Wheel.  However, I wanted to pay homage to some other concepts from settings like Mystara, which takes a much vaguer approach to the planes. Also, H.R. Giger inspired nightmare fuel!  Also, where details on original content were sparse, I twisted things around and added some of my own ideas.

END_OF_DOCUMENT_TOKEN_TO_BE_REPLACED

“Deep into that darkness peering, long I stood there, wondering, fearing, doubting, dreaming dreams no mortal ever dared to dream before.” – Edgar Allan Poe

Beyond the realm of Khorvaire lies many horrible things. Some exist upon the Prime Material Plane, while others are haunted remnants of old conflict. The wasteland of Cyre lures curious onlookers hoping to know more of the Last War. An empire of the undead waits patiently while assembling its forces. A deadly draconic power below prepares for an onslaught like none have seen. However, these threats and more are far more terrestrial. Within the realms of a sleeping mind lies a gateway into a dark unknown. It is here that the Mi-Go flutter, elementals of dream gather and the Quori plan their dreadful deeds.

AUTHOR’S NOTE: I love Eberron… a lot! Now, I wasn’t the first to convert some monsters over to 5E and I won’t be the last! Given my posts about dream-related content, it’s likely Dal’Quor content will show up in something else if Eberron isn’t unleashed to the public any time soon. So as always, continue to divine in the realm of dream and you too might learn a thing or two. For more dream wandering content, check out The Dreamlands tag.

END_OF_DOCUMENT_TOKEN_TO_BE_REPLACED

Incoming transmission! “There’s even more of them captain!  We thought we were finished, but they’ve only just unleashed even more of the damned things upon us!  Many of these wretched hell things feel even stronger than the last ones we fought!  We can’t hold out for mu-” Transmission ended!

Author’s Note:  Sorry for being late on this one.  I found out last minute that my group wanted to postpone my game, so I would have had a game synopsis last week.  I also got very sick following a busy work week.  With that, here’s a handful of more DOOM monsters.  I might do an update later on with another popular monster in mind… Arachnotron… Mancubus… Something like that!