Hail to thee of might and valor! I am no Devil Strahd, but I offer you something else! The sequel to Beyond Nebigtode is available in the 30th issue of Threshold Magazine! This article, “Lost Jaibul and other Dark Secrets” continues the narrative set up by The Black Rajah. Furthermore, it looks at two new domains coming from the later years of Blackmoor and the fall of Taymora. Be sure to check out other articles from #30 as well, detailing the Alphatian Sea and beyond.

You can find more via here.

The every day shuffling of feet against strange streets, the low murmurs of passersby, the ambience of a city infused with all means of reality and planes, the true center of the multiverse.  This is Sigil, a place of many stories… even stories as small as snippets from conversations and written word alike.  There is no seeming end to what one can learn from a little perception and a day’s worth of wandering.

Author’s note: What, a post by me? And it’s not just announcement? Could it be? Yes and no. I’m still somewhat retired from gaming creations for now. I’m less burned out on the idea of writing updates and ideas for this page. It was fun and worth picking up again.

END_OF_DOCUMENT_TOKEN_TO_BE_REPLACED 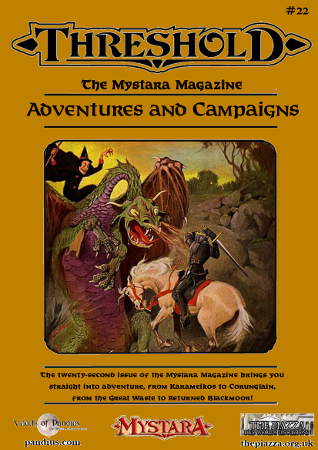 Return to the dark mirror that is Returned Blackmoor!  While issues remain in more populated lands, an ancient conspiracy has been unearthed in a zone far detached from prying eyes.  The Cootsbane Dam, a derelict turned military grounds, has had rumors of weird activity and stranger trespassers.  Investigate into the dark secrets and keep them from being unleashed upon the world at large!

Check out the current issue and “The Egg Be Dammed” Here!

Author’s Note: I wrote an edition neutral adventure for Threshold Mystara.  Admittedly, this was because I didn’t know what version of the game to tackle and Threshold tends to focus more so on BECMI, which I don’t have too much exposure to (outside of reading setting information of The Known World and beyond.)  I might update things for 5E or AD&D, maybe ask for a hand with BECMI for the next issue.