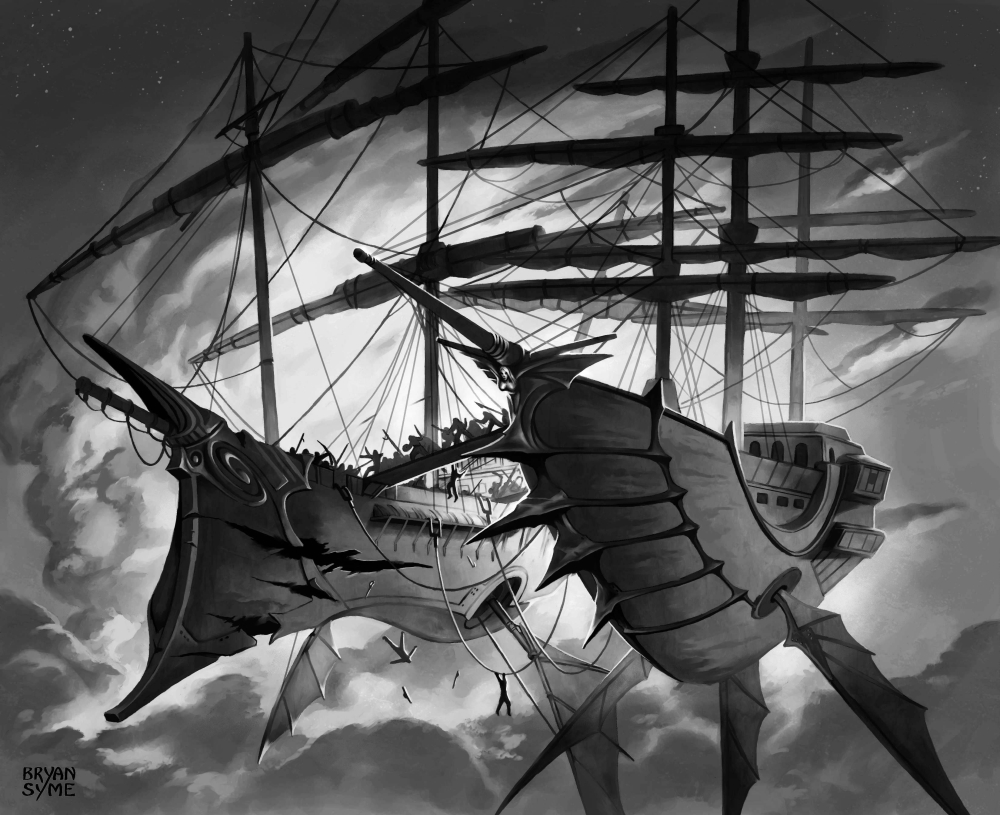 I realize that my lesson started and shifted a but abruptly.  But, you seek the worst and weirdest that arcane space has to offer.  Why would I slouch on a golden opportunity to explain all that is delightfully dooming in the stars beyond?  Ah, yes.  Do stop me at any moment.  As much as I relish spreading nightmares, it could be bad for the tutoring contract.  So, young one, let us talk particular subjects involving space today.  After all, fear not when being taught by the famous Jermaine the Arcane.  I always provide means of rescue advice.

Author’s Note: Spelljammer, at last!  All the same, October kinda of usurped a bit of that.  And so with that, have some RavenJammer!  Likewise, conspiracies and mysteries within the setting too.  Also, the largest heresy to the alternate cosmologies, they’re just Crystal Spheres with Planar elements…  Don’t be mad at me!  Plus hey, I love a good conspiracy angle, the retcon fits the Great Wheel and its many mysteries to some extent.  Primers be damned!  (But, mostly Clueless.)

END_OF_DOCUMENT_TOKEN_TO_BE_REPLACED

The small town of Duponde has a haunting legacy, for they claim to hold the final resting place of the infamous mage known as Evard! It is said that whoever disrupts his slumber will be cursed with an endless .  Will the sleepy plot of land be consumed by shadow or will the light find a way to liberate the encroaching darkness?

Journey into the darkness with this adventure, previously available to 4th Edition D&D Encounters, converted to 5th Edition through the DM’s Guild.  Inside of this document, you’ll find a variety of monsters and some alternate mechanics for running this adventure in Dungeons & Dragons 5th Edition.  In addition, a blurb is included on the Forgotten Realms, Eberron and Ravenloft settings.

Author’s Note: Here it is!  One of my favorite adventures from running stuff in the D&D Encounters program, now in 5th Edition!  Or rather, here’s some conversion notes so you can play this nicely crafted ghost story.  Also, you will require THIS ADVENTURE in order to use my conversion notes to the fullest.  Enjoy.  Also, this was my way to close out the summer and welcome the autumn!  Enjoy!  On that note, more updates for other products coming soon.  In addition, keep on the look out for more gothic and gaslamp posts on this blog!!

The Planetouched, truly incredible beings.  Such people can trace their ancestry to a powerful planar phenomena.  Perhaps they were literally born from an ancient union of mortal and creature.  Perhaps they are the result of arcane dabbling with such powers.  Maybe they’re the consequence of a warlock’s pact!  No matter the cause, the planetouched are usually the result.  Outside of hubs like Sigil, the City of Doors, such beings are extremely rare.  Some can be found in more accommodating locales like Mulhorand on Abeir-Toril or The Rock of Bral in Wildspace.  Either way, it’s likely that the average person will either never encounter such people or never know that they have.

Despite contrary claims, it is quite challenging to pin the plane-touched to a unified species or entity.  While some are indeed more unified than others, this is not the case as a whole.  You may see a Tiefling with horns and a tail; another with large monstrous clawed feet, a serpentine tongue and scales traveling parts of their body.  Likewise, you might see the most gorgeous Aasimar in existence, while another one is uncanny and horribly alien.

No matter whatever the case may be, I’m so glad you chose me as your Tout…  That’s cager for (usually paid) source of information, a guide of sorts!  So, plant your hind in a decent enough seat, now’s your time to learn a thing!  (It might save your head later!)  Also, please focus on me.  My little friend Dib will behave himself, I promise you… as long as you cork your bone-box and open an ear.

Author’s Note: This was one I’ve always wanted to do.  While not much of a “challenge” for me to tackle compared to other stuff, it mostly came down to filling gaps I noticed in 5E.  A lot of awesome planar flavor was missing and I wanted to remedy that the best I could.  So, here’s some extra options for planar races and then some!  Many tend to stick to a formula of sorts, but that’s what you get from sampling from similar races from various similar sources such as the Planescape setting, various Dragon articles and Pathfinder.  Sure, it’s not as open as the original charts, but this is a compromise of old and new.  Also, with the amount of attention touts such as Kylie have gotten recently through podcasts like Commander Holly’s “Trapped in the Birdcage”, I had to borrow her for an article! Enjoy.

END_OF_DOCUMENT_TOKEN_TO_BE_REPLACED

Even during your travels through the rather alien hub known as Sigil, your eyes latch onto a few familiar sights; goods and magicks from your prime material, creatures and cultures you have encountered in your travels and one very familiar and eager merchant that seems to follow you wherever you go.  Zam’dul too has seemed to appear in this fantastical city of doors.

“Hoohoohoo, traveler!  Zam’dul knows you to be an excellent customer!  Fear not, there is no stalking happening here, but simply travel to the places that adventurers go to!  As always, wares find their way to Zam’dul and prices remain fair.  Plus, a rather intriguing guild known as “The Fated” seem to have Zam’Dul’s interests in mind, should ruffians appear.  In the meantime, please sit upon a meditative cushion.  It is fluffed for long term discussions over philosophies and trading.”

Author’s Note: Magic items are always fun to make.  In fact, they might be the most fun thing for me to make.  So simple, yet there’s potential to create truly fantastical things!  Read onward and continue your adventure.