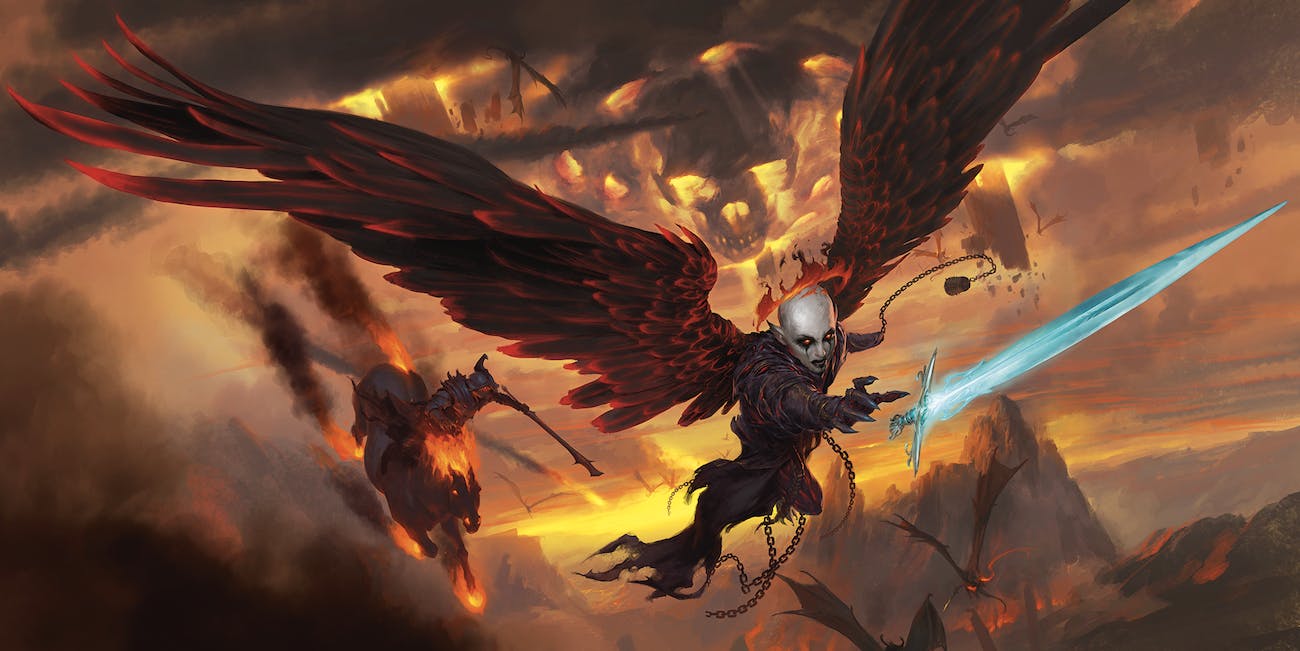 I’m on my way to the promised land!

The campaign pushed into the Grey Wastes themselves.  We were readied for countless fiends, all battling in the name of their dastardly causes.  We even were readied to control the sinister magics of the Night Hag.  But, something unexpected and foul caught many by surprise…  Aberrations formed and mutated through necromancy.  Surely, these beasts weren’t native to the plane, but something brought them there.  Something perfected them.  The casualties within my own legions became astronomical, even with pushing the abominations back long enough. –  Lucien, an angel-blooded aasimar paladin, captain of The Indefatigable.

My series of planar monsters continues with a healthy mixture of folklore, pop culture and crazy custom creatures.  This time, a post devoted to horrible things to crawl up from the Lower Planes!  Fiends, hellish constructs, necromantic mind flayers, cursed souls and more!

Author’s Note:  In addition to some more planar threats, I wanted to ramp things up a bit with some more out there experiments.  Also, shout out to Brynvalk for inspiring one of the scariest things I’ve ever heard of.  Also, I’m back to bringing in a fair number of fiends to horrify my mini-bestiaries!  I love making fiends!  Also, pardon the classic rock references.  But, it wouldn’t be my first time.

END_OF_DOCUMENT_TOKEN_TO_BE_REPLACED

You love me, you really love me! Your kindness is matched by the most generous berk in the world who hocked their jink to learn everything about the fair cage. But in all seriousness, I’m glad you returned for more of the dark on those who dwell here.

I gotta hit up other primers, lest you keep popping jink in my bag as I act like your personal info automaton.  All of you seem like fine bashers and bloods, ripe with adventure or something.  But, we have to stop meeting like this.  Besides, some of my associates think I might be planning some big dark with you.  Can’t have that, just business and all that.  That said, I would be willing to talk to you all about some hot shots of the Cage, if ya got the jink for it.  But, that’s closed quarters stuff.  Nothing any Hiver or higher Warder could sneak a quip on!

Author’s Note: Doing all of those variant plane-touched made me really want to tackle other races. I honestly don’t know if they’ll appear in Mordenkainen’s Tome of Foe’s or not.  Githzerai and Githyanki are already scheduled to appear in the upcoming book.  I might create stats for them before it drops for AL stores, we’ll see.  That might be for next week.  Either way, here is my take on them. Now, these races have been tackled by other people… perhaps with more know-how. Regardless, I wanted to do my own take. Here ya go!

END_OF_DOCUMENT_TOKEN_TO_BE_REPLACED

I loves me some Planescape and I wanna make sure my creations get out there to an audience who loves it just as much!  So, here’s a look at what my three posts have to offer!  Part of this is to help drum up interest in a revival for one of my favorite settings and prove that planar versions of these races are still viable in the modern era of D&D!  Please, take a look and help to spread the word!

“Are you still here?  It is good to be a dedicated shopper, but closing hours draw near.  A busy body must always prepare for the next day’s wave of customers and curators.  But, Zam’Dul is patient!  You shall be helped in finding what you seek.  Rest assured, the store likely has it.  Now, do follow and be shown many fine wares!  But, please do so quickly…  Pushing customers after closing is such a bother.”

Welcome back to another revisiting of the bizarre bazaar!  As always, Zam’Dul awaits customers with a fine assortment of majestic and obscure magical treasures.  Sure, he’s looking to close down for the night, but mark my words, he has plenty of oddities to showcase as always!  Sure, some seem familiar, but others are new sights to behold.

Author’s Note: It’s kinda ironic and hypocritical of me.  I’m not too content with reprints of spells and whatnot in the currently-new Xanathar’s Guide to Everything.  And yet, here I am, posting updates of older items I made in the past.  Not really a statement, just an observation.  Anyway, I hope these updates address some mistakes I made in the past, while highlighting which items I really liked a lot!

END_OF_DOCUMENT_TOKEN_TO_BE_REPLACED

Born (Or Reborn) among Wild Realms

The Plant Folk were created within another reality known to scholars as “arcadia”.  What exactly is this realm?  Not fully known, except it is the origin source of several types of magic as well as the fair folk.   Besides the native denizens, many fantastic creatures have been created through use of their alien magics.  Among these mystical sights and strange places is the Wyld, a sprawling plane of untamed wilderness.  Its alluring and inspiring atmosphere is quite deceptive, as terrible monsters and far worse curses dwell within the spacious demiplane.  Those who become trapped are doomed to become one of the many kinds of wildlife that inhabit this realm.  The plant folk are one such creation.

Native to a domain known as the “Wylds”, a planar place of natural beauty and (at times) savage brutality, the plant folk are at home within the bounds of their typically serene wilderness.  Like the beastfolk, many of these created beings weren’t originally humanoids.  In their case, they were merely plants that were animated and given new life through powerful sylvan magic.  Many have taken after the realm that created them, in hopes of creating a utopia of the organic, while defeating the inorganic.  Despite this, many are by no means evil and aggressive, some don’t even follow the cult-like ethos of their home plane.  Many grow tired of the semi-comprehensible rules, hidden behind the alien chaos of the primal realm.  As such, they’ve set out to explore other possibilities within known (and unknown) reality.  Some still retain attachment to their original home, but hope to “put down roots” elsewhere.

Author’s Note: Looking back at what I made last year, I was wasn’t satisfied with my concept for races of magical plant people.  They seemed really derivative and some decisions felt like rehashes of previous posts, with a different theme.  Now, I’m still struggling a tad with the concept, but here’s my updated take on the idea!  Some of the ideas are something I wanted to try and might be revised in another draft.  Also, I’m sorry for that one pun…  Really, I am.