For anyone supporting my second tier, you can check out this live draft on Patreon, where it shall receive some upgrades and downgrades.

Deep within endless trenches of the oceanic depths lies a race of creatures guaranteed to strike terror into the souls of many a sailor.  They’re given many names among seafarers – Sharkmen, Sea Devils, Sea Raiders, and countless others.  Whether any of these detractor names hold any weight or accuracy is to be determined.  However, anger and xenophobia is quite close to fact amongst the Sahuagin.  Any fool who’d dare tread upon their territory is soon greeted by endless waves of relentless raiding parties; attacking crewmen, infiltrating ships, and sometimes destroying the ship piece by piece.  Whether or not the attacks are deserved is up to whichever side of the raid you’re on!

Within their deep kingdoms, Suhuagin life is complex.  These beings live under a strict caste system based on personal merit.  Those capable of building, growing, and creating are on the top; while those who are less capable are largely ignored or sometimes relegated as parasites.  Those in the middle are used as defenders against threats both aquatic and land dwelling.  While some could argue that stealing from land beings goes against their meritocracy, they envision it as payment trespassing on properties where intruders are not wanted.  However, there are many marked safe points where one can meet with a Sahuagin, in an effort to visit their underwater realm.  Woe to any fool that doesn’t prepare for a dive through deep water and intense pressure.

Author’s Note: I was originally going to do this for just D&D 5, but one of my blog buddies encouraged me to open this option up to Pathfinder as well! And so, I am!

END_OF_DOCUMENT_TOKEN_TO_BE_REPLACED

“This wasn’t supposed to happen, I had control of my power! Now the whole damned town is wolf beasts and it’s my fault… I fear that in my blackouts I’ll also father pups. To the crusader who found me, slay my body and redeem my soul! Though, maybe they’ll fail and I’ll snap back.  I’d show them what a fusion of man and beast can do!”
– Letter from an executed Warrior Beast

Envious of rumored barbarians who can channel nature spirits in them and druids who command the forms of nature itself, you’ve sought out your own method of channeling natural power. The power in question is the dread disease of Lycanthropy! Fortunately, you’re purposely afflicted with a modified version of the curse. While many would have succumbed to its dread power, you’re slowly molding your new abilities to your benefit. But, in doing so, you become less of your original self and more of a wild creature. While some exploit their boons to become savage warriors, some embrace becoming more than sentient beasts.

They weren’t always abominations hunted with equal prejudice as lycanthropes. In ages past, alchemists sampled blood from the dread creatures to help create super warriors. For a while, there was much success! Several kingdoms bid for these juggernauts and witnessed the turning point of several battles… That is until the cursed warriors started to go completely mad. Some tried to harness the power to horrible ends, becoming no more than upright walking wolves. Others found ways to make their “gifts” spread like traditional lycanthropes. Because of this, they soon proved to be quite the scourge! Bounties upon their slain heads remain high to this day.

NOTE: The original draft, which I consider to be quite unbalanced in one way or another, has been removed.  The updated version of the crunch is available via “Zoanthropes – A Collection of Werebeasts” via DM’s Guild.  It will likely receive a final revision though. 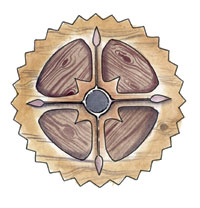 Your devotion extends far beyond Gods and Ideals, but shaping technology and other crafts of artifice to set your needs and goals.  To you, crafters of traditional magicks are below you and a detriment to the inevitable advancement of civilization.  All aspects of experimentation and engineering are at your mercy.  You don’t just have faith in super-science, you control it!

In terms of domains and belief, this domain is more than capable of existing in numerous settings.  In the case of Greyhawk, Myrlund the Cowboy hero might be a good match for heroes interested in weird western steampunk elements.  For the Forgotten Realms, one of the Gnomish deities or Gond Wonderbringer would be a perfect match.  Likewise, anything (Tinker) Gnome is perfect in the Dragonlance setting.  Of course, the Iron Gods themselves would work within Pathfinder’s Golarion.

Author’s note: This domain is heavily inspired by the Technocracy faction in the Original/Classic World of Darkness campaign, “Mage the Ascension”, not to mention the Iron Gods Adventure Path for the Pathfinder Roleplaying Game (available now!).  Of course Blackmoor, Eberron, and Iron Kingdoms had something to do with this.

END_OF_DOCUMENT_TOKEN_TO_BE_REPLACED

Author’s Notes: This is based off a request for 5e Kitsune, here’s my take on the race! Just letting you guys know, this one was more of a challenge for me than I expected. Oddly enough, the hardest part was making it NOT like an elf. Also, big thanks to Brynvalk for greatly improving this race!  (I won’t lie, my original concept wasn’t very good.) If you haven’t done so already, do follow her blog too!

This race of fox-like creatures descended from the creations of the true fae themselves, the Arcadeans.  This realm of mischief and wonder is the perfect point of origin for these vulpine tricksters.  For the fae progenitors, they see these beings as the perfect mixture of faerie magicks and the fox’s natural cunning.  However, the foxfolk themselves had become discontent with their faerie-realm utopia.  Against the wishes of their creators, they began to explore the multiverse.  While some clans sought out all reality had to offer, others took after their creators and observed the planes beyond through the veil of illusions and stealth.

The foxfolk are known for a wide variety of talents beyond the ability to create tricks and traps.  Many incorporate the teachings of their fey ancestors into self-defensive and battle styles.  In particular, dueling with light weaponry is quite common among the Reynardy branch of the foxfolk.  These people have had a wide history of swashbuckling, leading great quests, and going on grand expeditions for fantastic treasure.  The Kitsune on the other hand prefer a more covert lifestyle.  Their culture has long since emphasized use of magic to conceal and hide your actions.  Any influence this wish to cause, they will do so from a distance.

CHECK OUT THE UPDATED VERSION HERE! Like their overworld mountain born allies, the Ursine, these creatures are an unnatural race.  When news of powerful beastmen swept into underground kingdoms ruled by foul beings such as the deep elves, fungoloids, and other dreadfel beings; they sought their own answer.  Inspired by a clan of wererats that had infected a deep elven city before being purged by their high priests, a new race was born.  Just like their wererat inspiration, these beasts melded humanoid and rodent and were taught the ways of subterfuge and trickery.  Some were mutated by the experiments, readying them for horrific environments that would be torture to many.  After ages of being used as tools to observe the overworld, many broke free to form their own societies.  The angry deep elves were less than pleased by this idea and still vow to exterminate these “profligates” for their failure to serve.

Within modern Ratfolk society, community is highly regarded.  This is due to the cramped and tight nature of warrens.  Countless clans will inhabit a warren, as resources are distributed to ensure survival of as many as possible.

“While many patrons prove to be truly wicked souls, The Technocracy has good intentions in mind.  Their aim is the betterment of the world around them through less sporadic and potentially destructive uses of energy.  Through innovations in super-science, everyday life can be bolstered in ways magic can not provide.  The average person is incapable of using magic, but science makes all things approachable in time!  For you see, The Technocracy is a patron for only the most noble and virtuous!”

For ages, you’ve dreamed of progressing the world forward.  Something about a world saturated in arcane power feels tainted and backwards.  Then you realized, there are like-minded beings in the multiverse who share your plight!  Ever since, you have joined forces with an emerging movement that refers to itself as “The Technocracy.”  By becoming the essence of technology itself, you can one day cleanse the world of its mystical imperfections and supernatural chaos.

“Pollution, plague, and radiation mixed into an unholy soup that tainted and warped all it touched!  Some gained incredible psychic powers, while others devolved into hulking mindless brutes.  Most just died of radiation poisoning or slowly died covered in painful tumors.  But those rare few, the so-called ‘freaks’ survived.  They were changed and imbued with strange abilities.  Even in a hostile climate where the world is in ruins, it’s not too easy to keep your weird gifts a secret.  People will find you and hunt you down, whatever their insane reasons are.”

In the off chance that exposure to harmful elements doesn’t seriously corrupt or kill your character, there is also a chance to gain some useful mutations as well.  Here is a list of concepts and ideas I’m running with for a more science-fantasy inspired game.  Below are some examples of character mutations.  By all means, if these do not suite you, swap them out with your own ideas.

As one would expect, there are many downsides to being a mutant… aside from being a social pariah!

NOTE: Benefits (and rules basics) can be found here.