The shop has closed and the storekeeper ushers you out.  Along the way, he hands you a note though.  As you find yourself under the clammy evening following an afternoon shower, the letter seems to unfurl itself by magic.  The writing is unlike that of the scribe’s.  “For your service, allow me to provide some insight by my own eyes.  After all, any new information broker under my service should be given a proper welcoming present.  And yes, this means you.”  Lowering the letter, you notice a button materialize upon the right breast pocket of your shirt.  It’s a symbol, one swearing allegiance to Azalin.  Frantic, you continue reading.  “Now, please review this information.  It shall be relevant to your next assignment.  And please, don’t think of betraying me.  The last one who tried never made it to the domain’s border.  Now, inform yourself.  I shall test you the following evening. – A”

Welcome to Darkon.  You are from here, you have always been here, you will find your roots here and you shall always serve Azalin Rex.

Author’s Note: I forgot that I wanted to revisit Odiare. I never really liked that domain and the adventure that went with it felt too hokey. So, time to make Maligno’s existence a true nightmare. Mangiafuoco, a cruel puppet master from the original story, becomes his ultimate foil.  Big thanks to the Fraternity of Shadows forums for inspiration. Other than that, let me further rip off Thief.  Also, no one tries to get something out of the mighty lich without him getting something in return.  That said, as much as I love Azalin as a magnificent bastard, I’m done with him… save for one more thing.

END_OF_DOCUMENT_TOKEN_TO_BE_REPLACED 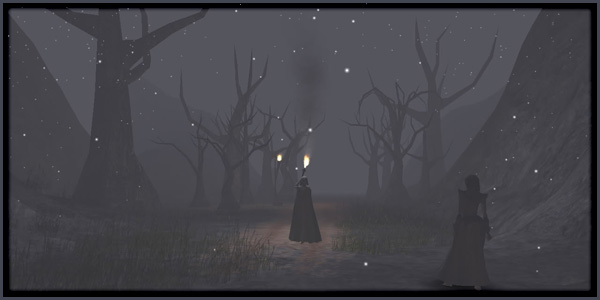 The Mists choke figuratively and literally, standing as an ever oppressive and overbearing force.  But, what are they?  This is a mystery that will continue for all time.  What is known are the more tangible entities that haunt the endless realms of this demiplane space.  Many of these are tragic figures who fell from grace, while others are condemned for absolute wickedness.  As I have already uncovered, many places in the Prime Material have either fallen victim or been alleviated of their worst…  This depends on your perspective. What is certain is that those removed have become the things of myth and legend in their home world.  But here, they are forever trapped.  The few who have escaped are anomalies, truly luc

ky.  Of course, this could be just weavings of The Mists.  After all, tales tell of Vecna’s paradoxical victory and failure.  But, what could foil a demigod?As for me?  Not certain.  Beyond some vague words and promises, it would seem that I should seek out Darkon.  However, it would appear that The Mists have other places to “distract” me with.  Or at the very least, slow me down.  Either way, I continue through the clouding vapors, until I see sites anew.  I still mull over the fact that I wasn’t taken this time by some trap of the Powers.  No, instead of going back to Gloomwrought, I found myself a prisoner of Azalin’s very contemplations.  But, again, why would his own minions be found in the Prime or even the Planes beyond?  It baffles the mind.  What has stuck with me is the tarot card given to me prior to the ritual.  It is a symbol of Death.  But, why is that significant?  I have heard of the pocket realm caused by Azalin known as “Necropolis”.  Is “Death” somehow involved too?  So many mysteries, so many questions.  In time, I hope I will find some answer or be consumed trying to understand.  Let us hope for the former, shall we?  And with that, we venture onwards.

Author’s Note:  One more trek into the demiplane of dread, at least for Halloween.  Also, I wanted to think of a possible outcome for yet another mad plan of Azalin…  Or rather, a plot made by outside help.  In addition to a look at more core domains, I made two cluster contributions originating from Mystara (including the Hollow World).  Plus, even a tribute to Planescape makes its way here.  There is an homage to the “Set Wands to Warpdrive” game I played in, back before this blog made it over to WordPress.  A heavily abridged version of that is noted in the darklord story, but that might appear in a future post instead.  Also, enjoy a reveal that pays homage to the Gazetteer series.  Of course, I might say that.  Also, I realize the picture I used for Darkon is from Night of the Walking Dead.  I couldn’t find proper art… oh well.