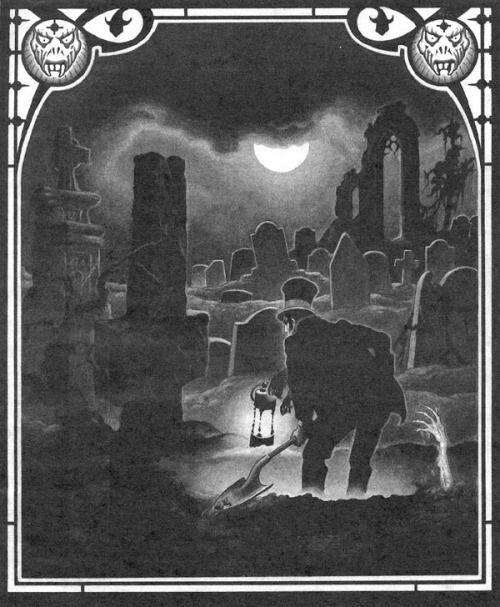 Storytelling, it is a tradition.  For Vistani wanderers, there is no exception.  The spoken story has helped keep tribes and clans together.  And by all means, those of different clans have collected countless tales across travels.  Some speak of taboos, others of strange secrets, others purely bizarre.  Tonight, you are invited to hear some of these tales and decipher what is fact and what is mere myth peddled along for entertainment.

Author’s Note: Huge thanks to Matt Doyle alias “strahdsbuddy”.  His own creation got my own creative juices flowing, even if a few ideas were looted.  This one is a bit shorter, but that’s partially because I’m on vacation and need a break from life for a little bit.

Of Borcan Trickery and other Incidents

There are Borcan ties to Alleigosto… but, how could that be?  False history tells that many Alleigostons have Borcan roots.  Indeed, there are claims that those who left the kingdom made their way up north, well away from the politics of both that land and Barovia.  Finding their way towards coastlines, they discovered an emerging nation state of its own, one built upon logic, reason and progress.  For centuries, a new land flourished under the watch of several Houses, including House Olbsodt.  But, such an advancing power wasn’t without its share of grievances and arising issues.  These former Borcans would balk and decry the dehumanization and alienation of changing industry, the exploitation of their own and many more problems.  In time, several members of House Olbsodt would hear and recognize their plights… and this ties into the true history of the Darklord himself.   It was here that Alleigosto got its origins, at least according to recorded lore.  But, ask anyone from Borca and they’ll likely respond in confusion.  As far as Alleigostons are concerned, Borca is a strange land forever and tragically locked in its past.

Dorvinians are very much Borcans, but all the same still maintain some level of identity to the slight chagrin of Ivana Boritsi at times.  While those under the watchful eyes and extensions of Ivan Dilisnya, much insight has been gained to not only preserve olden values, but to look to those who neighbor the land.  This is the most apparent case with a rival in Falkovnia.  While Ivan’s trickery destroyed an attempt for invasion, recent events have turned that in their favor.  Borca has heard rumors of Falkovnians moving undercover and into Richemulot, taking pieces of uninhabited rural land for producing their own staple crops to ship back to the mainland.  As such, a little Borcan intrigue has made sure to their failure.  Due to the introduction of a mysterious catalyst, many of the crops in the Silent Field plantations have gone sour and those who ate them have fallen ill.  Physicians sent to assess the situation have discovered that the means was artificial, an act of sabotage.  While no ties have traced back to Borca, many have been put on alert.  Even the leading Clan Renier has sent agents to investigate matters, suspecting foul play.  In truth, there were no Falkovnians staging an elaborate plot on Richemuloise soil.  On the contrary, it has all been a ruse from the beginning to prod Borcan involvement.  Their end goal is simple, spark in-fighting and collapse within the lands sworn under treaty.  And should the treaty fall and the allied nations turn on each other, Falkovnia will have a much greater chance of conquest desires.  Until they, they alienate and isolate as many as possible through use of subversive propaganda.

Of Other Ancestries and Backgrounds

Forfarian roots in Arak and Tepest.  Mad as it may seem, but the Forfarians stretched well beyond just mere Forlorn.  Aye!  They had territory within the lands of Tepest and lost Arak.  Its appearance in the mists after Forlorn is far from coincidence.  Many fled the bloody war beyond the walls of Castle Tristenoira, which lead to the fall of the land.  However, their dooms came later indeed.  While the tales of gods and myths speak of a different land, one could argue much of that mythic history was lost from Forlorn as only some druids were taken to the domain.  Though, many have lost much of their ancestry and their ways, retaining whatever they could.  Before Tepest, there was Arak, where many refugees somehow found themselves in.  Many attempted to retain what was lost by Tristen Ap’Blanc’s mad campaigns.  However, the tales of fey weren’t just real, they were a grim reality down below.  Ultimately, these fair folk brought doom upon the overworld and erased most life not many years after the domain’s formation.  This would be from the apocalyptic ritual that would form Keening, ultimately near Tepest.

Invidian-Gundarakite War, a conflict brushed under history as both leaders were killed.  In the time before Gundar was taken by The Mists, he made something of an ally with Baron Bakholis, in his plans to overthrow Barovia.  This started with their colonial hold over Hunadora.  Meanwhile, a younger Bakholis was interested in subjugation of Invidia through inheriting power.  None the less, the Baron aided in schemes to help overthrow Barovian rule.  The ensuing massacre that lead to the deaths of the colonists, as well as apparent “deaths” of the “entire” Gundar family, inspired Bakholis.  In the decade leading to his own control over his homeland, he attempted a campaign to colonize Hunadora himself.  The battle resulted in mutual casualties, with few soldiers returning from a wiped out ruin.  This deeply marred the baron, a secret he would later refuse to share with Gundar after a jump into The Mists.    In truth, Bakholis was ambitious after Gundar, seeing competition as a strongman vs a strongman.  In the years since he too was taken, resentment quickly grew towards his neighbor.  By 608 BC, Bakholis began to bait Gundar into a trap, in hopes of starting his own mad invasion plans.  By 610 BC, the Invidian plan was in full force.  However, Duke Gundar’s knowledge of war was seasoned enough to hold the line and keep the invaders back.  Over the next 60 years, battles would break out sporadically.  However, these conflicts became predictable for both tyrants.  A final petty act was conducted in 711 BC, when survivors of the Loran Elbrian adventuring group were kidnapped from Invidia.  In respect to the Duke, said adventurers have caused grief for Gundar several times and earned his enmity.  The Duke of Gundarak was relieved when Gabrielle Aderre took out the bloodthirsty baron by 730 BC, lest more skirmishes break out.  Gundar’s hatred faded when “that witch” wasn’t interested in continuing the border violence. But, he still hates Invidians.  All of this serves to flesh out his hatred and torment of Gabrielle Aderre.

Of Natural and Unnatural Disasters

Dawnsveil is no stranger to turbulent weather.  Even in the Prime, horrible storms and vicious waves made sailing impossible at times.  Over the overland was well oppressed by dangerous downpours and brutal blizzards.  Within the demiplane, these conditions have grown even more dangerous.  A seismic wave leapt from the violent currents during a well brewed storm.  It washed alongside the western edge of the primary colony town.  Several buildings, such as the dock master’s office, the Smug Sailor Tavern, a fishery shop and a well guarded warehouse were wiped out in one swooping crash.  Likewise, a particularly harsh winter from the previous year locked the territories of the colony away from each other.  Emboldened by a colony reliance on stored foods and rations, the wendigo attacked with more ferocity than normal.  The cause is both is likely linked to an occultist sect in observance of The Dark Witch.  They believe that a reclamation of natural order will cure what ails the land, even going as far as misinterpreting the scattered natives as martyrs for the lost land itself.  Many have used rituals to conjure elemental creatures, often resulting in corrupted mockeries emerging to bring anguish to the land.  In fact, one bound spirit inhabits the seas nearby the domain’s holdings.  The soured water elemental can no longer properly form itself.  However, it has far greater control over the watery bodies surrounding the domain.  It can even go as far as to slightly alter weather related to rain or snow.  The vindictive elemental spirit takes great joy in making the rare catastrophic weather or even making conditions especially treacherous.  This spirit, “The Soul of Water”, seeks escape so it can regain a true form while fleeing this colony that it so deeply despises.  Likewise, it seeks to know its summoner, so that way they may be undone too.

Few embody the sheer brutality of nature and its disasters more than Ichthyos.  The very land itself is wrought with and brought to ruination from disaster.  The seas are often treacherous, before monsters are factored into the choppy waves.  Storms are just as frequent, with clouds often taking unusual and at times maddening colors and patterns.  Whirlpools have likewise spawned without reason or logic, merely forming and pulling vessels into their deep graves.  Whirling waterspouts have likewise whipped up at random, pulling apart hulls after an otherwise normal day of sailing.  The horrible weather and water conditions often coincides with the darklord’s attempt to appease his grim masters.  Usually, nothing happens at first.  As if by the awareness of the divine, tragedy strikes someone either attempting trade with Ichthyos or someone attempting to visit by seas.  Sometimes, random travelers are hit by the worst that the realm has to offer.  Many sailors have become superstitious of any waters too close to the cursed domain.  As such, they try to hang along coastal lines of the Broken Cog, trying to steer closer to Zherisia instead.

Strikes of lightning provide much fright all alone.  For Lamordia, the raw power can be used for diseased science and corrupted experiments.  In Bluetspur, it carries a harsh psychic power upon the craggy wasteland overworld.  But, in the bustling and quite posh communities around Glensburough, it signifies something worse.  Much like the stories of the Darklord’s father, the storm was always a symbolic ill omen.  With the first strike of lightning, it is too late.  The macabre tales of the late Mr. Weir favored one villain when it came to a clap of thunder and a surge of electrical power.  This is none other than The Cheerful Stalker.  This otherworldly serial killer always follows the storm, plotting out kills with every flash of bolting light.  And as the storm calms down, his festival of slaughter begins.  Those he can’t immediately kill are subjected to evil mind games.  Rain as a whole is a subject of great discomfort in the land, for fear that the prophetic lightning will carry its curse once more.