You awaken to find yourself chained against a damp and musty cave wall.  What you see before you was likely once a man, but his flesh sways and twitches in ways not befitting a natural creature.  As he glances at you, several copies of his face seem to project, as if to magnify his speech. Multiple uncanny smiles form in disjointed succession, as the space-warped thing speaks.

“You thought you escaped?  What a foolish notion!  The Mists are eternal and you are a puppet!  A wise adventurer would best research on things that dwell in darkness, lest they be another story of the Dark Powers.  In the end, you are all the same.  But, a fighting chance is too irresistible to ignore.  So, fight on and fight well, mortal.  If you were wiser, you could have read onward about the awful things that sprawl and crawl.  I was once like you, but then I was chosen to be beyond human.  The cosmic eternity takes the worthy, granting them a new story.  But first, allow me to do the honor of ending yours.”

Shadowy projections of his hand reach over, to simply touch your forehead.  Protrusions and mockeries of the flesh extend from the tainted thing’s arm.  The mass plants itself upon your head, as you feel its horrid pull.  The force of a thousand realities tries takes your essence.  All goes black, the alien void has won.

Author’s Note:  I had more planned, I just wanted to space them out instead of cram it all into one post.  I’m still pondering where to go next.  But, the Stars are Right for… something.  And yes, The Thing was one of the inspirations behind The Paradox.  But, how would you conduct a blood test for it?

This twisted creature looks like a rat king, an amalgam of rodents.  However, the heinous war magics of the battlefield have twisted it into a truly gruesome horror.  Flesh and fur crawl and warp, sometimes forming properly rodent bodies.  Often, it is a congealed mass of limbs and jaws twitch and chitter.  The formation will run or slosh around in search of flesh to consume.  And in winding and dirty trenches, bodies are plentiful and they merrily feast.  Escape is unlikely, as they compress, collapse, reform, congeal, do whatever they can to pursue a victim.

Domain of Origin: The Snaking Trenches.  Thankfully found only here, these creatures are an embodiment of the horrors of warfare.  In this case, the byproducts of it.  The hive mind of sludgy rat things are heavily opportunistic, due to the otherwise dangerous environment beyond the dug out tunnels.  In fact, the damp and sheltered nature of the trenches make them viable breeding grounds for more to spawn.  In some cases, hollowed out bodies of victims are used as nests.  Curiously, their hive-like state makes them similar to the Cranium Rats that dwell in Reality’s End.  It is possible that these were once Cranium Rats that escaped Sigil into Eberron, where the magics of The Last War mutated them.

Liquefying Bite.  Melee Weapon Attack: +7 to hit, reach 10 ft., target one creature.  Hit: 12 (2d6 + 5) piercing damage plus 13 (3d8) acid damage.  Any creature brought down to 0 HP or below by this attack attack must make a DC 15 Constitution saving throw.  Failure results in the victim dying, as they dissolve into a disgusting puddle. 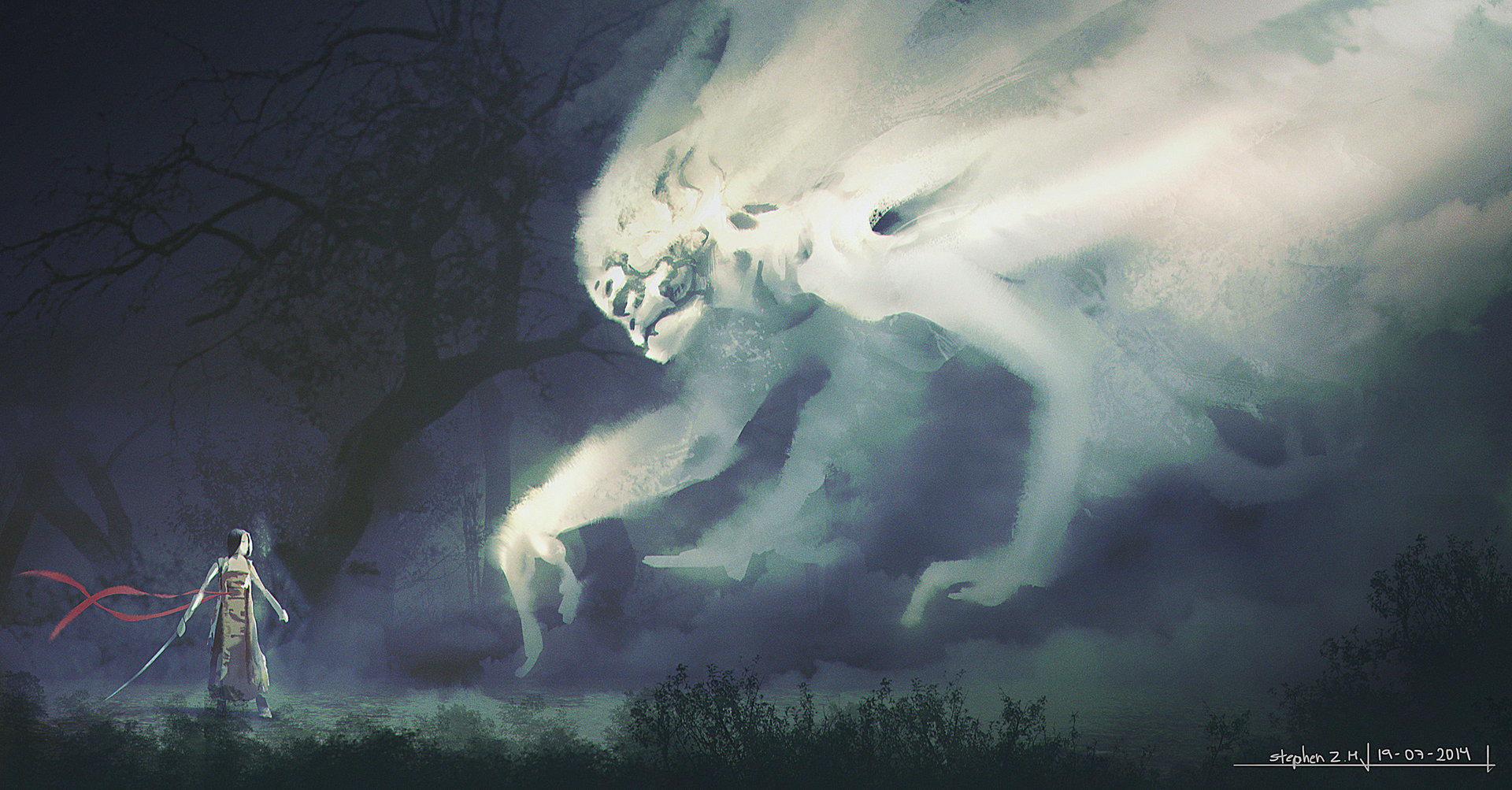 Conjured replicas of fiendish beings of the planes, inspired by horrors of Chaos and Law… even wholly new works of Dark Powers’ wit.  Despite being fake and meant to keep wanderers in the city, they are still quite deadly.  Many have crafted up personas fitting or either devil or demon, even though their abilities seem to be a mixed hybrid of both.  Likewise, they resemble various devils or demons as well.  True to their original nature, different factions have a habit of attacking each other though.  While they initially are forged out of mist, they take a solidified form just moments later.

Domain of Origin: Reality’s End.  A reminder of the Darklord’s folly, the Mists have brought an essence of the Blood War to the false Oinoloth’s land.  Try as he may, conflict follows his failures.  Try as the darklord may to close the borders of the domain, the monsters that dwell in the misty barrier are never affected.  While they are condemned to the domain’s rim, they still camp and plot, either fighting each other or fighting anyone foolish enough to leave the “safety” of the city.  In fact, the darklord can close his border, always sending the victim into another battlefield of conflicting fiends.  While the two forces love to fight each other, they take more pleasure in torturing other beings.

Fiendish Sight.  The Mist Fiend can see through magical darkness and other effects.

Magic Resistance.  The Mist Fiend has advantage on saving throws against magical effects and spells.

Multiattack.  The Mist Fiend may make two attacks per round.

Slam.  Melee Weapon Attack: +8 to hit, reach 5 ft., one target.  Hit: 14 (2d8 + 5) bludgeoning damage.  Alternatively, the fiend may swap out for either piercing or slashing damage once per round.

Terrifying Stare.  One target within 60 ft. must make a DC 16 Charisma saving throw.  Upon failure, they take 19 (3d12) psychic damage.  Depending on the fiend’s alignment, an additional effect occurs.  Should the target succeed, they take no damage and the effect ends.  Otherwise, a new saving throw is granted at the end of the victim’s turn.

Depraved and deranged, these atrocious creatures stalk the ruins beyond Castle Tristenoira.  The warty and green mockeries of humanoid life practice profane rituals and feast upon all beings that dare to tread into their realm.  While they fear magic, they owe their very existence to it.

Domain of Origin: Forlorn.  Tristen ApBlanc already cursed his land with his very existence.  However, upon being taken by the Mists, the Powers corrupted most of the residents and replaced them with foul little monsters, the goblyns.  These artificial creatures spawned by dark magic almost always have a tragic backstory.  Many of these awful reborn things were changed against their will.  In fact, they currently make up the majority of Forlorn’s population alone.  The Shadow Domain of Daglan has also been known to create more goblyns, thanks to an evil artifact known as the Crown of Souls.

The Goblyn retains the same traits of the original Goblin entry, with the following alterations:

When someone dies in the state of revolt and rebellion, the steer strength of their willpower can make their soul carry on.  They become an unwavering force of idealism and liberty, twisted by the powers of The Mists.  These emboldened spirits crusade for their causes, but have long since lost several scruples after death.

Domain of Origin: Invidia.  Malocchio Aderre’s coup over his mother’s reign was a shock to many, even if most found Gabriella most disagreeable.  Her son, an ill omen, proved far worse.  Attempts to overthrow him and retaliate were failures, even as Gabriella began to organize a resistance of her own.  Several of these guerilla warriors and rebels found themselves colliding with the stranded and enraged remnants of Gundar’s shattered nation.  However, one major campaign to take Invidia back failed spectacularly.  The collective desire for liberation combined with the Dark Powers caused a new type of spirit to arise.  Other domains, such as G’Henna, Dawnsveil and Barovia (due to Gundarakite nationalists) have seen these phantoms materialize more and more.

Ghostly Combat.  All physical attacks use Charisma, instead of Strength or Dexterity.  Likewise, add Charisma modifier to armor class.

Incorporeal.  The Dread Revolutionary is capable of phasing through walls and solid objects as if they were difficult terrain.  However, ending their turn in a solid form causes the creature to take 5 (1d10) force damage.

Incite Revolt (1/day).  As an action, the Dread Revolutionary makes a statement that inspires chaos.  All creatures capable of hearing with 15 ft. must make a DC 13 Wisdom saving throw.  Upon failure, they may repeat their saving throws at the end of their turn.  Upon success, they are immune to this effect for 24 hours.  Until then, they must roll 1d8 at the start of their turn:

Revolutionary Spirit.  While within 30 ft. of another Dread Revolutionary, they gain advantage on Ability Checks as well as Saving Throws.

Creatures that succeed on their saving throw are immune to this effect for 24 hours.