The Mists have spawned all manner of atrocities and abominations to traverse its foggy murk.  These creatures are usually the physical embodiment of either a darklord’s sins or the horrors of our very existential condition.  Some are merely pulled into the Demiplane of Dread and enhanced into something so much more, even replicated to bring new methods of terror to the native populace of the lands.  No matter the origin, they stand in opposition to heroes who challenge the everlasting darkness.  Whether they are pawns of the dark powers or operating on their own accord is up for debate, but their haunting presence shall be known to those unfortunate enough to encounter them.  In fact, some creatures are capable of removing you from known reality.  All the more reason a monster hunter be readied and prepared for such evils.

Author’s Note: Nightmare Fuel, Body Horror, Terrors of the Cosmic and more!  Yes, Halloween is done and plenty of real life horror may get in the way, but nothing a little pretend horror can’t distract from. So, let’s take a moment to enjoy the monsters of some chilling tales.  After all, it doesn’t matter if it’s Halloween, they always lurk and await new victims.  Here are a bundle of monsters inspired by the Planescape/Ravenloft posts, from various domains or dimensional spaces.  Also, the inclusion of the Wolfwere was done in support of the November RPG Blog Carnival, hosted by Faith of Pratfalls and Pixies.  Find more here!  Also, look out for part 2 soon.

A paradox is a tragic creature, often created by accident or transformed by a dark source.  Some afflicted aren’t even aware of their wicked condition, causing countless creatures around them to banished from space and time; a true final death.  It’s not challenging to identity a Paradox without powerful magic.  There are subtle disturbances to the multiverse that happen around them.  Shapes and color are off, things bend at odd angles, a null void seems to follow them.  Even the mannerisms of a paradox seem disjointed and sometimes uncanny.  This isn’t to say that most are oblivious to their condition, as many are malicious and seeking to spread mass entropy and anguish.  Despite ghostly appearance at times, they are very much not undead.  But, they aren’t fully alive either, as they now exist beyond reality.  Luckily, none remain in the Lands of The Mists.

Domain of Origin: Cavitius.  Tampering throughout the planes ultimately lead to the doom of another entity, but it was the truest foil for one darklord’s plans.  Zegul’Mrot, an enterprising ultroloth, desired to take the power of legendary beings for a mad goal.  Vecna was his final target.  With the power he had, he took doomed souls out of reality, transforming them into a blight upon the cosmos.  Simply put, they were now beings outside of space and time, walking contradictions with the workings of physical truth.  While Vecna was well aware of what was happening, he doubted the yugoloth for too long and found himself unable to combat the strange new force.  The grand wrath of Iuz was trampled, the campaign of Kas the Betrayer was ruined and the reign of Vecna was eliminated… for now.  However, Vecna attempted a backup plan for fleeing the Mists…  It only partially succeeded, causing a ripple effect that almost caused a second Grand Conjunction.  The mighty lich still found himself in the City of Doors, but as an ascended paradoxical entity.  While quickly banished from the City and subsequently removed to obscure pockets of the cosmos, that is a story for another day.  The “heroes” who started the reaction were tossed about the planes, somehow making more of them.  While their numbers are limited, their creator was taken by The Mists, where he was also stripped of the means of making more.  But even now, the Paradoxes wander the planes.  While most of their victims are erased, some come back as a new paradox.

Paradox is a template that can be given to any creature that isn’t a Construct or an Undead.  A paradox creature has the same stats as they did in life, but with the following changes:

One of the deadliest abilities of a Paradox is their ability to taint and destroy reality around them. Those who fail the initial saving throw of Distortion Touch are infected with a reality distorting illness, which isn’t an actual disease.

Following the failure, the target loses 1/2 of their maximum hit points (rounded down) as well as gains disadvantage on ability checks and attack rolls. Likewise, enemies gain advantage on saving throws against effects caused by an infected. However, infected gain advantage on saving throws and attacks against them have disadvantage. This is due to the fact that the victim is being gradually tugged more out of reality. A Dispel Magic or Greater Restoration spell will end this effect. After 24 hours, they must make another saving throw. Failure causes them to wink out of known reality. All creatures within eyesight of the victim must make a Wisdom saving throw (same DC as initial Distortion Touch of the creature) or instantly forget the identity of the affected victim. The use of a Modify Memory or Greater Restoration will undo this, as long as someone succeeds the saving throw. Likewise, the only way to bring back a vanished infected is through a Wish or True Resurrection spell cast by someone who succeeded their saving throw. Anyone who did not witness the vanishing instantly forgets that the infected ever existed. If all creatures in the area forget the victim after they have vanished, all hope is lost and they are forever forgotten.

However, whether or not the infected target is forgotten, they must roll a 1d100 after this failure. If they roll a 90 or higher, they return as a paradox creature instead. 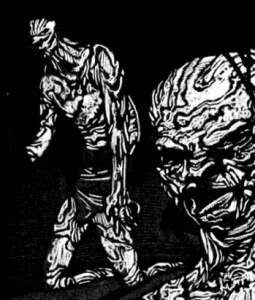 Sloughs of flesh, cast aside from other undead creations.  Many particularly crafty necromancers will re-purpose these leftovers into other minions, as to not waste.  The Boneless are literally undead flesh and muscle devoid of a skeleton.  In some cases, the creatures are not complete, but mottled mixtures of leftover pieces meshed together.  With no solid support structure, the creatures move in grotesque and unspeakable ways.  They slither and slink, sometimes retaliating against whole creatures, especially the living.  However, this is usually done on a command, as they tend to be mindless like zombies.  Surprisingly, these creatures show an unnatural strength and can be quite agile, even while lacking a true skeleton.

Domain of Origin: Darkon.  An earlier experiment of Azalin, mostly from not wasting remains.  These undead are corpses devoid of skeletons, often the result of their bones used for other projects.  The mage Faylorn was specifically contracted to aid in such a project, under Azalin’s supervision.  This revolutionary discovery allowed for more to be done with Azalin’s growing undead terrors.

Bestial Sprint.  As a bonus action, the Boneless can take the Dash action.

Grappling Flesh.  Checks to grab opponents and maintain a hold are always made with advantage.  Likewise, a grapple attempt is part of an attack.

Rat Squeeze.  The Boneless can maneuver through spaces as if it were a Tiny sized creature.

Water Dependency.  The Boneless must soak in water once a week.  Failure to do so causes its speed to be halved and gain vulnerability to fire damage.

Multiattack.  The Boneless may attack twice per round. 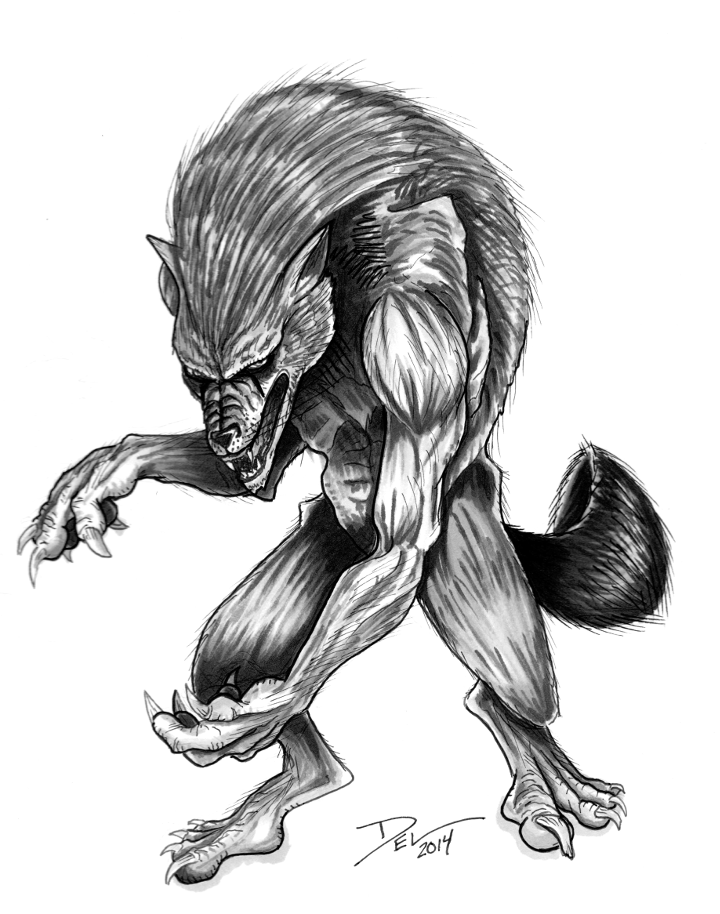 A powerful and intelligent hunter, born of dark power and sinister spirits.  Unlike the werewolf, they are a completely separate entity.  In fact, they often view werewolves as imposters who make a farce of their powers.  However, other wolf-like creatures (including worgs) have joined with them are more than one occasion to form especially deadly packs.  Also unlike the werewolf, its true form is that of a giant wolf.  The beast displays a distinctive cunning within its stare.  And worse, there’s a hypnotic allure to its wicked voice.  But, this ability is not to soothe, but to lure humanoids into traps.  Deeply misanthropic and hateful, the wolfwere delights in dragging humans and demihumans alike into lethal traps and hunts.

Domain of Origin: Kartakass.  The nefarious bardic singer of Skald has a wicked secret, he is a devious wolfwere.  In fact, so are all of his followers.  While not as strong as him, even the infamous trickster beasts pail in comparison, their tricks are more than able to manipulate and warp the senses.  None the less, the tricks and hunts of the wolfwere make them all the more frightening in Kartakass.

Magical Attacks.  The Wolfwere’s bite and claws count as magical, for sake of resistance and immunity.

Pack Tactics.  While next to a friendly creature, the wolfwere may attack with advantage.

Shapechanger.  The Wolfwere may assume the form of a humanoid creature, their natural form of a large wolf or a mixture of the two as an action.  In addition to taking a humanoid form, they may take on the opposite sex of that creature as well.  Returning or taking another form requires an action as well.

Innate Spellcasting.  The Wolfwere has an inherent grasp of magic, using Charisma as its casting stat (+5 to hit, DC 13).  It knows the following, without the need for material components:

Multiattack.  The wolfwere may attack 2 times per round with Cudgel, one attack may be claws in hybrid form.

Lethargic Song (Humanoid Form).  The wolfwere unleashes a song, affecting all creatures capable of hearing within 60 ft.  They must succeed a DC 13 Wisdom saving throw or become charmed for upwards to 1 hour.  The affected target cannot take hostile actions and moves at 1/2 speed.  If the charmed target takes damage, they may make a new saving throw.  However, if the wolfwere who started the charm attacks the target, the effect ends.

This wolfwere seems far more intellectual and influential than the rest of the pack, a strain of powerful dark magic courses through them, but especially through their tongue.  Harkon Lukas himself is a unique Trickster Beast, likely far more powerful than displayed here (by increasing HP, proficiency and general damage output).  The Trickster Beast has the same abilities as the Wolfwere with the following changes: