Xoriat, a realm of unspeakable evil. The native Daelkyr reside here, experts of sickening fleshcraft. Among their works were legions of warped and disfigured abominations, the daelkyrspawn. These things were once captured forces of Material plane fleets, the very races that attempted to repel the nightmarish plane. While Xoriat’s connection was ultimately severed from the list of coterminous planes, countless creatures were abducted and transformed into the sickening puppets of today. While many are simply stranded in the Prime Material, some seek methods of returning the tether to Xoriat and continuing the invasion from so long ago. Many of these atrocities prepare for battle in the depths of the dark realm of Khyber. From this hideaway, they all ready for an onslaught in the name of their aberrant creators.

Some, like the dolgaunt, for monastic cells to prepare a tactical strike. Other abominations are far simpler and mindlessly assault all creatures that may move too close to their grasp. Either way, their psychologies are far too detached from the mortal realm to properly figure what their current goal or aspiration is.

AUTHOR’S NOTE: More Eberron once more. Here is an updated take on my version of the Daelkyrspawn from a ways back. Also, if I may hop on my soap box. Please, support Exploring Eberron over Rising from the Last War. The former is purely Keith Baker’s voice, not the sanitized version released by Wizards of the Coast. So much was watered down to fit their new market model, but the guild allows fans to recapture what WotC decided to leave behind.  Back to this post, I realize an official Choker was published, but I always found them neat and weird… so they’re remade here too from their original days. 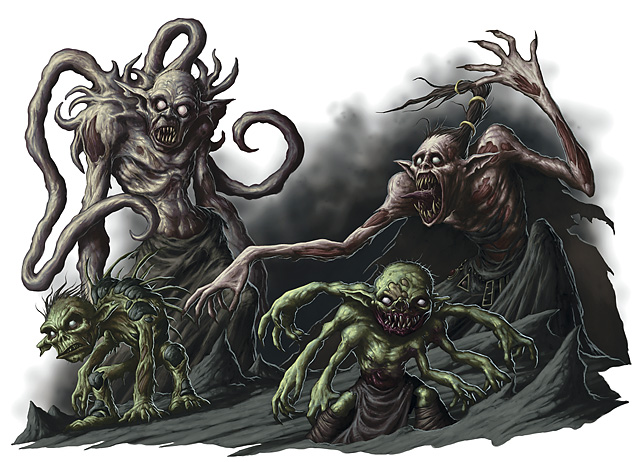 This stock of mutant horror originates from hobgoblin, one of the races that helped to push the ancient Dhakaani Empire forward. The changed new creatures that were built from them were quite split off from their hobgoblin roots, with a few things surviving. Many dolgaunts favor a more tactical and sound mode of attack, sampling some techniques used by their hobgoblin ancestors. Some even form small blocs of monastic orders, all readied for combat for their dark masters. Despite their blindness, their cilia like elongations allow them to sense their environment to a degree.

Blindness.  The Dolgaunt is blind, using the protrusions from its skin to sense instead.

Grappler.  The Dolgaunt can use its bonus action to attempt to grapple a target it has hit with an attack.

Life Sap.  Once per round, when a creature it hit by a tentacle attack, the Dolgaunt regains hit points equal to the damage dealt.

Tentacle Communication. Dolgaunts can silently communicate with either other within 30 ft. This method of communication cannot be observed unless their opponents also have blindsight.

Multiattack.  The Dolgaunt may attack with Tentacle twice per round.

Short and mad best describe these small but fierce abominations. As one could guess, they were descended from the blood of goblins. These front-line warriors are often sent head first to deal with whatever bothers their respective aberrant masters. Their methods of attack involve a chaotic barrage, hoping that alone will take down any overwhelmed foes.

Dual-Minded. Dolgrim have two minds fused into one. They have advantage on all Intelligence, Wisdom, and Charisma saving throws against magic.

Multiple Arms. The Dolgrim has multiple arms.  It can choose to use a bonus action to make an extra attack or make a Strength (Athletics) check with advantage.  This advantage bonus can be used for grappling.

Nimble Escape. The Dolgrim can take the Disengage or Hide action as a bonus action on each of its turns.

Once a slave stock, always a slave stock. At one point, these creatures descended from bugbears. As brutish as ever, the dolgrue are just as much destructive powerhouses. However, they are seemingly even mentally slower than their progenitors. But, to a walking engine of war, any intellect is best handled by creatures that give the orders and make the plans. Whether under the control of some other aberrant being or devotee of Xoriat, they are capable of wrecking nearly all in their path.

Brute.  When the Dolgrue hits with a melee weapon attack, it deals one extra die of damage.

Hard to Kill (1/day).  When the Dolgrue is reduced to 0 hit points or less, it may use its reaction to drop to 1 hit point instead.

Multiattack.  The Dolgrue makes two attacks per round.

Squat in stature but shockingly stretchy. These horrors are capable at lunging at a foe and enacting their namesake of strangling the life out of a victim. the Choker is a vicious and nasty spawn of the Daelkyr. It is a master of hiding and opportunity. As a hand to hand combatant, it can’t sustain much in damage. So, it relies in distinct trickery and sneakiness to avoid a quick death.

Incredible Grappler. The Choker can grab creatures up to large size without penalty.  When grappling a medium sized or smaller creature, it may do so with advantage.

Quickness. The Choker can use its bonus action to take the Dash action.

Spider Climb.  The choker can climb difficult surfaces, including upside down on ceilings, without needing to make an ability check.

Strangle. Every turn that a creature is grappled by a Choker, it gains 1 level of exhaustion.  These levels go away after escaping the grapple for more than 1 minute.

Multiattack. The Choker can attack twice per round.