Once more, let us tell tales of mighty heroes and frightening monsters.  From steppes below to mountains above, tales of high adventure await.  And with them?  Great foes and allies alike.  You thought you only had to worry about the Baba Yaga?  You are quite wrong!

Author’s Note: I wanted to make some Slavic inspired monsters with a lower CR rating, especially considering the rest have been pretty strong.  Also, here’s a bonus heroic NPC to accompany these troublesome treks!  Also, a Merry Christmas and Happy Hanukkah to my readers! 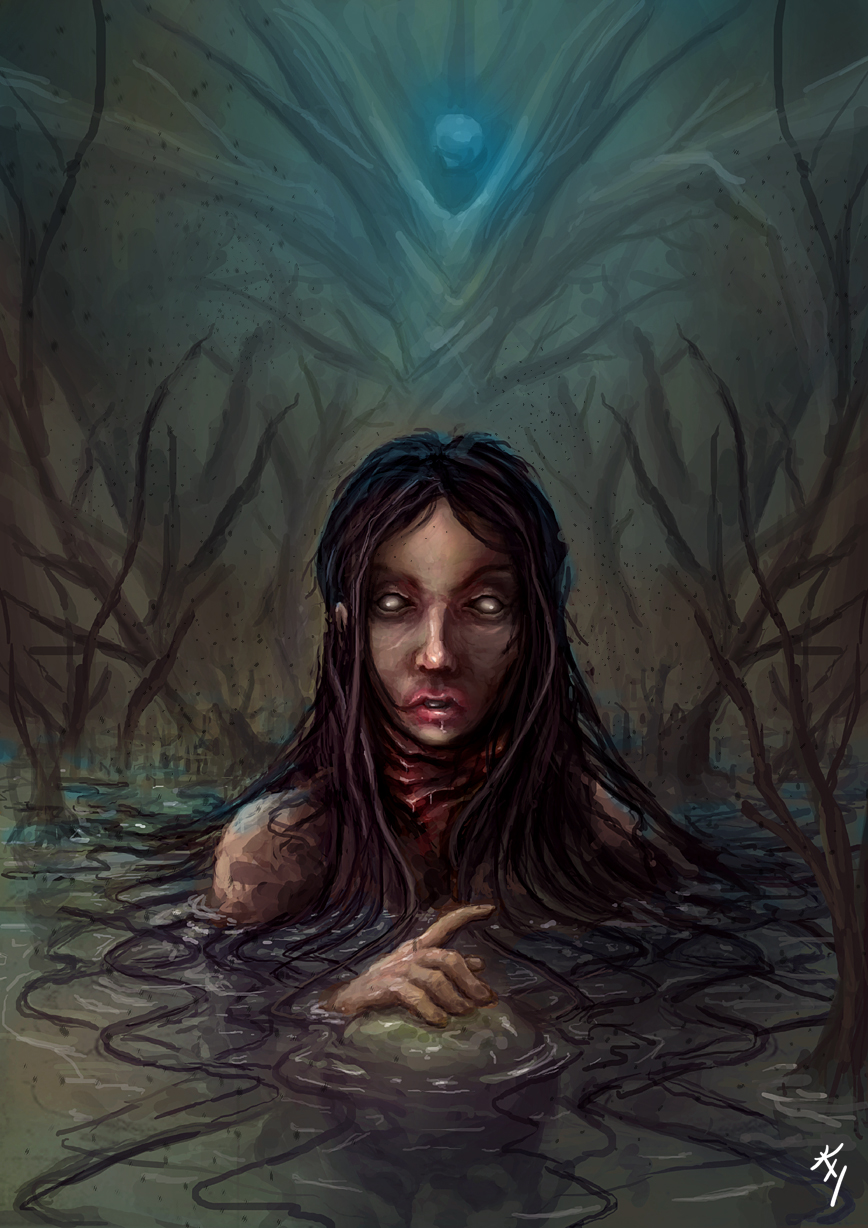 A spirit of the water, often born from strange circumstance.  Simply put, they are created when life is given to the water; whether through a ritual cast by grateful priests and farmers or at times from a horrible drowning death.  The respective cause often affects how the Rusalka will manifest and act.  Curiously, they will never harm any spirits of their own kind, even if said spirits wish to preserve and protect land life.  Likewise, more benevolent spirits won’t harm their misguided sisters.

Often, the spirit will manifest as a beautiful woman.  Some are capable of sharing life-imbued moisture to the lands around them.  Others are content with dragging life into murky depths and suppressing it.  Either way, there is a stunning quality to the rusalka.  Some use this to manipulate others, while others try to use this gift for non wicked means.

Life Moisture.  While partially emerged, the rusalka can make the area around her damp, with plants given an adequate amount of water to survive.

Drown all Foes.  Those captured within the tresses of an angered rusalka are dragged down to a watery grave.

Grappler.  The rusalka has advantage on checks to grapple.  Likewise, attempts at an escape action are made with disadvantage.

Like Water.  The rusalka has advantage on all checks to escape grapple.

Unnatural Allure.  Any creature that can see the rusalka within 100 ft. must make a DC 15 Charisma saving throw.  Upon failure, they are charmed by the rusalka’s presence and regard her as an ally.  Unlike with most charming effects, being attacked by the same rusalka does not break the charm or cause a new saving throw.  If the charm is broken by other means or if the save is successful, the creature is immune to this effect for 24 hours.

Water Dependency.  After the Rusalka has left the water for more than 1 minute, it begins to suffer greatly.  The Rusalka must make a DC 15 Constitution saving throw or take 10 (3d6) poison damage.  She must repeat this save every minute until she has returned to the water.  This damage cannot be healed while she is out of water.  If brought to 0 HP by this effect, the rusalka will die and dissolve into water.

Tickling Touch.  One creature grappled by the Rusalka and taken underwater must make a DC 13 Constitution saving throw.  Upon failure, they are considered drowning, due to uncontrollable laughter.

A short, fuzzy and stocky house spirit.  It looks like a short old man that is more beard than face or body.  Their joys involve protecting a home and consuming milk.  It prefers to keep peace and order within its respective home, so long as other residents keep on its good side.

Damage Resistances bludgeoning, piercing and slashing from non-magical weapons that aren’t made in cold iron*

Change Shape.  The domovoy may take the form of a house cat or small dog as an action.  Its stats don’t change in these forms.

Innate Spellcasting.  The domovoy has some control over innate magics, using Charisma (DC 13; +5 to hit) as its casting stat.  It may cast the following, without need of components:

*treat cold iron as a silvered weapon, for sake of mechanics 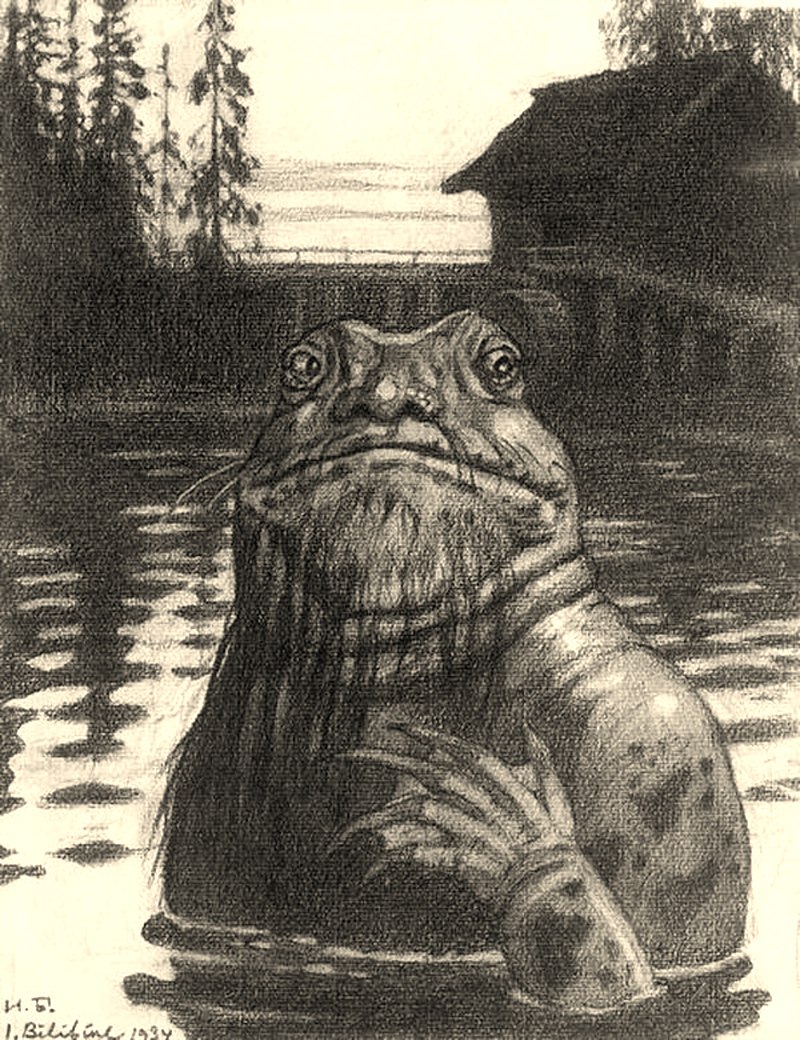 Frog-like and grotesque, this creature has the features of a rotund old man, with a monstrous head and a fish’s tail.  A tell tale sign of this creature is its sinister and glowing red eyes.  The creature’s clawed, webbed hands look particularly dangerous.

This creature is a petty being who snatches up unwitting victims to drag into his watery kingdom, to act as his slaves.  This spirit creeps along the tips of watery areas, looking for anyone with their guard down.  Swooping in, he grabs the creature with his webbed hands, dragging them down.  Should they resist, he has no qualms with drowning them.  When particularly angered by trouble makers entering his territory, he isn’t above sabotaging dams and mills.  Wanderers had best stay away from the turf of the Vodyanoy.  When coaxed with a good offering, they can offer much in return though.

Ambush Prey.  The vodyanoy has advantage on attacks against surprised targets.

Innate Spellcasting.  The vodyanoy has some control over innate magics, using Wisdom (DC 14; +6 to hit) as its casting stat.  It may cast the following, without need of components:

Like Water.  The vodanoy has advantage on all checks to escape grapple.

Siege Monster.  The vodyanoy does double damage to objects and structures.

Multiattack.  The vodyanoy may attack twice.

Slamming Flab.  Melee Weapon Attack: +4 to hit, reach 5 ft., one target.  Hit: 5 (1d6 + 2) bludgeoning damage.  The target must make a DC 12 saving throw or be pushed back 5 feet and fall prone.  Instead of doing damage, the vodyanoy may instead choose to grab the target.  A DC 12 Escape Action will allow a target to break free. 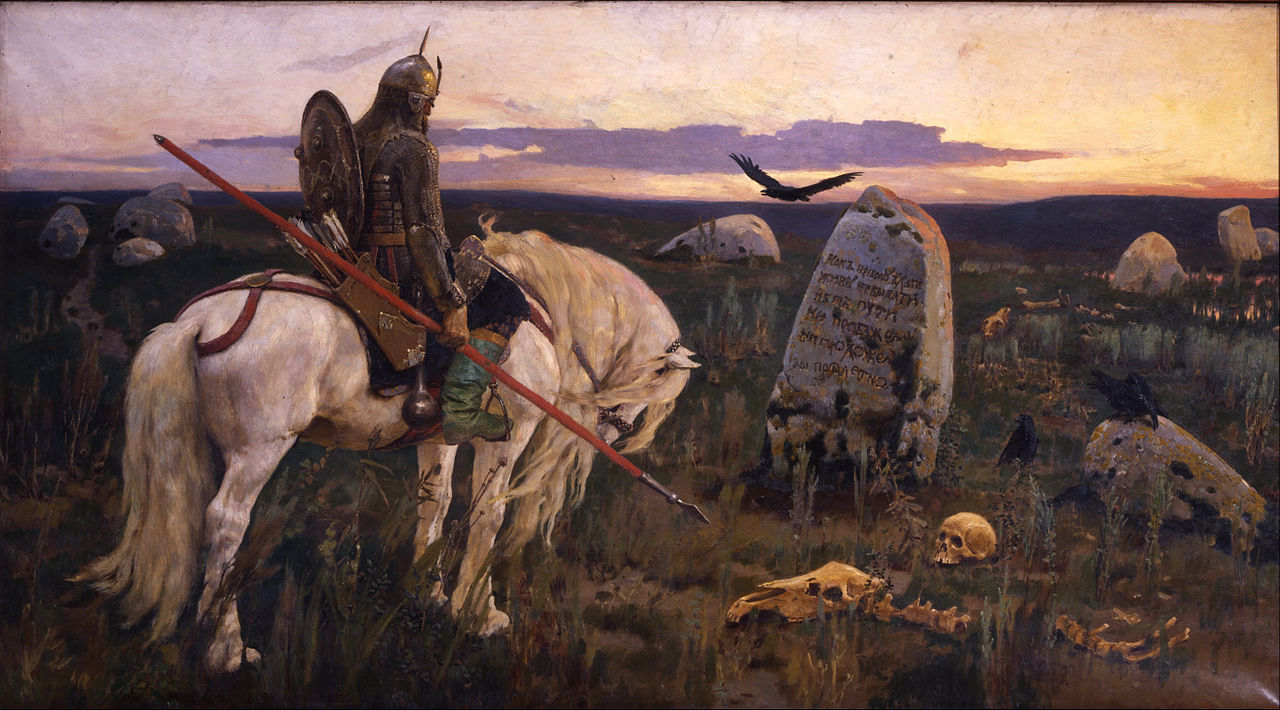 A righteous knight errant, as spoken of in epic ballads and quests.  They serve under mighty and noble leaders, going forth to banish evil and protect the common good of the land.  One such leader united a group of bogatyr to help envision the start of a great age.

Hero’s Mind.  The bogatyr has advantage on saving throws against charm and fear effects.

Issue Challenge.  As a bonus action, the bogatyr can challenge a mighty foe.  This works similarly to the Compelled Duel spell.  The creature must make a DC 12 Wisdom saving throw.  Failure results in them eager to face the challenge, while success allows them to choose on their own accord.  Creatures immune to charm are not affected, even though this is not a magical effect.  Furthermore, creatures that succeed are immune for 24 hours.  The bogatyr can only issue a challenge to one creature at a time.  Choosing a new target will end the previous one automatically.

Premonition.  The bogatyr can receive visions in dreams about potential people or places.  Whether they are brought by gods or some innate ability is up to the DM.  These visions are often relevant to future and/or tangential events.  The frequency is typically no more than once a week, but serious events can make them happy more often.

Multiattack.  The bogatyr may attack twice per round.

OPTION NOTE: Should you desire to have this NPC improve on their own quests, consider using the Sidekick rules as featured in the Essentials Kit box.  Alternatively, the Unearthed Arcana document should suffice.  Alternatively, adjusting for hit dice and proficiency is also acceptable.