“You understand the risks of joining our hunting team, yes?  There are many things in the woods that would stop our enterprise, but we’re among the most elite in the lands.  Our skills are legendary.  Some angered spirits don’t threaten us!” – The last words of a foolish trespasser

The forest holds many mysteries beyond the fabled Grandmother of the Witches.  Life grabbing wolves, tree-like giant men, three headed dragons!  Such terrors and more lie over the mountain side and into the forest.  Travel with caution and tact.  And of course, show respect to the spirits around you.

Author’s Note: My exploration into Slavic folklore creatures continues.  Also, I’m gonna cover some weaker monsters for lower tier adventures later.  So far, all of these have been at least pretty strong. 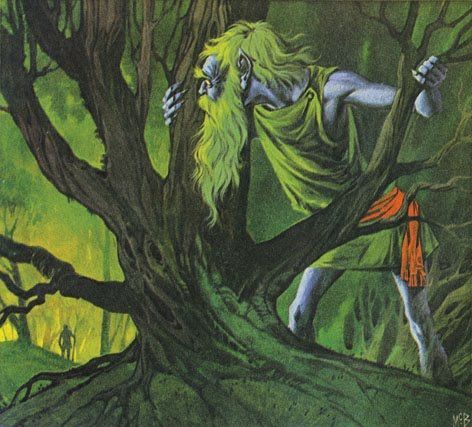 Tall, stocky and strong; the Leshy is an imposing figure of the forest.  Their massive builds greatly resemble the trees they protect, as their wavy hair and untamed beards resemble leaves and grass.  These roaming giants act as protectors, indulging in trickery when their turf risks threat.  Their looks can very though, as some have been known to be more spindly with skull like faces.

Plane of Origin: Deep Ethereal – The Good Kingdom.  The realms of the fey are where these creatures are most at home.  Typically, they roam the woods filled lands of the Summer and Autumn Courts.  Some have been known to form pacts with the denizens of these realms.  Of course, they’re not above making deals with farmers and shepherds of the prime material.

Call the Wilderness (1/day).  As a bonus action, the Leshy may call upon the aid of powerful predators.  This can manifest as 1d4 wolves or 1d2 brown bears.  These animals will fight to the death and grant no bonus experience points.

Imitated Voice.  The Leshy is capable of mimicking other voices, as well as throwing the voice within 30 ft. of it.  Any creature that the Leshy has heard for at least 1 minute can be imitated.

Lead Astray.  While in a forest, the Leshy may use its action to conjure illusionary trees, while masking others.  Creatures interacting with this altered terrain must make a DC 16 Nature check or find themselves getting lost.

Tree Disguise.  As an action, the Leshy can take the form of a tree.  While in this disguise, it is indistinguishable from an ordinary tree from its region.

Throwing Mastery.  The Leshy does not have disadvantage to make ranged attacks while adjacent to an enemy creature.

Multiattack.  The Leshy may use its slamming fist three times per round or use Slamming Fist and choice of either Choking Earth And Roots or Forest Debris.

Crushing Earth and Roots.  All creatures within 40 ft. of the Leshy must make a DC 16 Strength saving throw.  Upon failure, they become restrained.  At the start of their next turn, they take 7 (3d4) bludgeoning damage.  They may attempt a DC 16 Escape Action to break free.

A horrible beast from beyond death itself. This cursed being drains the life of the living, while under the guise of a wolf. To many, they are akin to a fusion of vampire and werewolf. That’s not entirely false.

Plane of Origin: Prime Material.  Those loathsome and bestial creatures were damned as wicked revenants. It is said that they come about when a slain soul with the mark of the beast is given an improper burial.  One legend speaks of just a feral undead horror, akin to the worst of ghouls, created much like traditional vampires and, in some cases, werewolves.  Despite being similar, they don’t share a lot of the same weaknesses as vampires do.

Keen Hearing and Smell.  The volkolak has advantage on Wisdom (Perception) checks related to hearing and smelling.

Regeneration. The volkolak regains 10 hit points at the start of its turn. However, should the volkolak take radiant damage or start its turn in sunlight, this effect is disabled until the beginning of next round.

Sunlight Weakness.  At the start of the volkolak’s turn, if it is exposed to bright and natural sunlight, it takes 10 radiant damage.

Multiattack.  The volkolak makes two attacks per turn, only one may be Bite.

Bite (Wolf or Hybrid Forms).  Melee Weapon Attack: +6 to hit, reach 5 ft., one grabbed, incapacitated or restrained target.  Hit: 10 (2d6 + 3) piercing damage.  The target must also make a DC 15 Constitution saving throw.  Failure results in taking 9 (2d8) necrotic damage.  The target’s maximum hit points are reduced by the necrotic damage taken.  The victim’s hit points are returned to normal after completing a long rest or being subject to a Greater Restoration spell.  When a creature’s maximum hit points drop to 0 or if a creature is killed by this attack, they return as a volkolak up to 24 hours later.

Claw (Wolf or Hybrid Forms).  Melee Weapon Attack: +6 to hit, reach 5 ft., one target.  Hit: 8 (2d4 + 3) slashing damage.  The volkolak may forgo damage to grab a target instead.  The target must succeed a DC 14 Escape Action to break free. 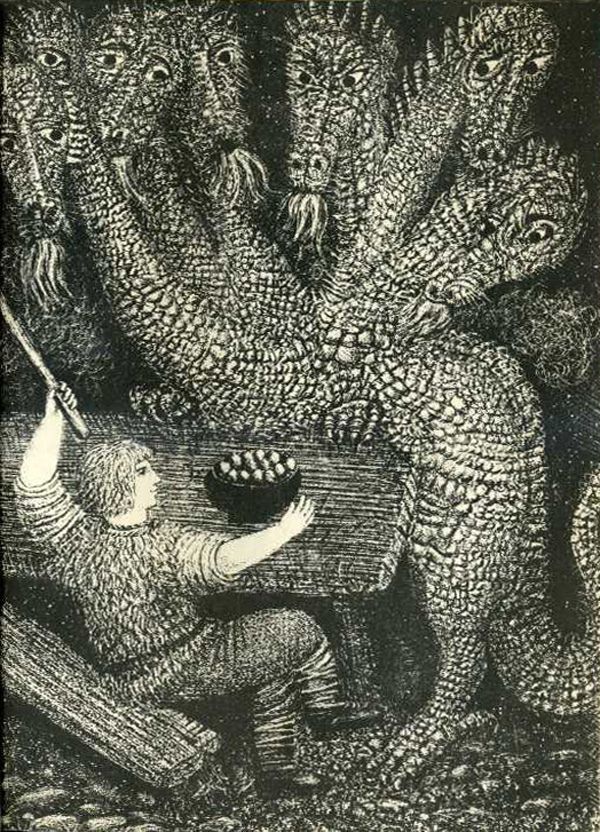 A curiosity among dragon kind.  Sometimes, they act as benevolent folk heroes, other times they’re antagonistic.  Unlike other dragons, they’re capable of manipulating multiple elements.  Its three heads are capable of inducing much terror.  Its serpent-like structure for its many heads allows it to snap at prey, without even needing its many breath weapons.  Combined with fish-like tail, bat-like wings and sturdy limbs; it remains a strange looking creature, even among other dragons.  While it has made many foes, one in particular is a type of demonic spirit called a Hala that can wield lightning.

Plane of Origin: Unknown.  The Traladarans of Mystara have a theory of some realm of spirits that this dragon emerged from a spirit realm.  This story likewise rings true for many people of Damara on Toril.  Lately, Rashemen has begun experiencing problems with it, so they too suspect something similar.  Some suspect that it is related to the Baba Yaga.

Shapechanger.  The zmey may use its action to polymorph itself into a unique humanoid.  This form is specific to it and usually resembles a specific person from a particular humanoid race.

Multi-headed.  The zmey has advantage on saves against blinded, deafened, incapacitated paralyzed, and restrained conditions.

Multiattack.  Zmey may attack up to three times per round.

Three-Headed Breath (Recharge 4 – 6).  The Zmey exhales an elemental breath from one of its three heads.  All creatures within a 60 ft. cone must make a DC 21 Dexterity saving throw or take 63 (18d6) damage.  This damage is either cold, fire or poison and must be chosen before the breath weapon is used.  Successful saves result in halved damage.

Hydro Burst (Recharge 6).  A watery tornado is briefly formed by the Zmei’s tail.  It surges in a straight line for 40 ft.  All creatures 5 ft. within that line must make a DC 21 Dexterity saving throw or take 65 (10d12) bludgeoning damage.