People who aren’t careful have a habit of vanishing in this city.  The cops, they just don’t care.  Hired hands, they’re hiding something.  The likes of people like me, researching the truth on the side.  If you’re careful, you’ll stay close and ask few questions.  – Herman P. Finske, Attorney and Occult Reseacher

Even as times change and people progress, one things stays true…  there are things that always go bump in the night.  Your walled in lands of safety can still be infiltrated or outright broken down.  And even without that, there are still dark forces at work from within.  Mad experiments, mutants, things of the mind and more!  Monsters are going modern for this week!

Author’s Note: More urban fantasy/modern horror creatures!  This time, right out of the pages of D20 Modern with my own twists here and there. 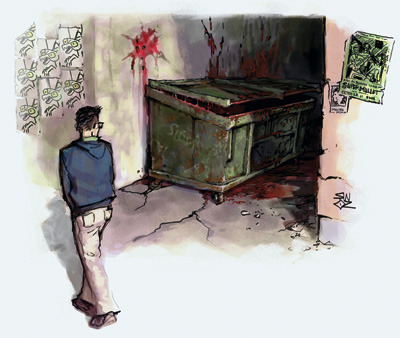 The work of some deranged mind.  The Living Dumpster is exactly what it describes.  Its purpose is a simple one, feeding.  It seeks to lure any prey close so it can lunge and feast away.  Sometimes, some wicked souls can train them into being security “pets” to act as alarms and to eat trespassers.  Likewise, they can be trained to remain idle until the right moment.  But, don’t get in the way of a cruel metal beast and its desired food of flesh.  It knows know master when it has been deprived for long enough.  However, it can sate its appetite temporarily with all means of garbage, making it even more convincing of a display.

Metal Maw.  The Living Dumpster may use its Swallow Whole attack as a bonus action if it hits with a Slam attack against a target it has grabbed.

Near Immovable.  The Living Dumpster has advantage on all saving throws against forced movement and being knocked prone.

Wall Crush.  When moving up towards an opponent that is next to a wall, the Living Dumpster deals an extra 10 (3d6) damage on a successful slam attack.

Wheels.  The Living Dumpster travels on wheels.  While it is capable of traveling over multiple types of terrain (including difficult terrain), it cannot climb up surfaces of any kind.  Also, its noise causes disadvantage to any attempts at a Dexterity (Stealth) check.

Multiattack.  The Living Dumpster may attack with slam up to two times. 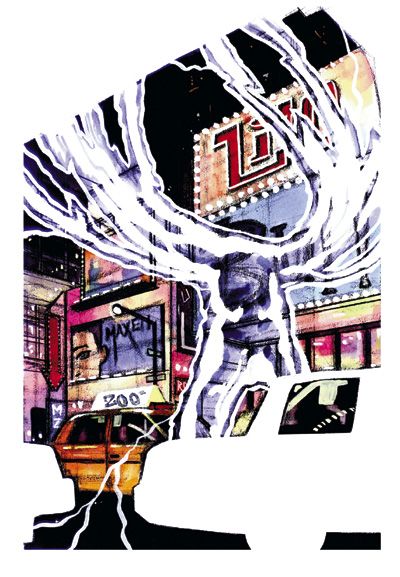 Called “The It from Dimension X”, such a monstrosity’s origins are unknown.  All that is known is that it latches onto dimensional travelers and forces capable of traveling between space.  What it truly desires is also unknown, as it tends to react in confusion and rage when it arrives to its new whereabouts.  While hard to see, when it unleashes its assault, a massive humanoid body shape devoid of head is revealed, albeit a somewhat see-through frame.  For agencies like Hoffman, this is the epitome of Xenoform.

Dimensional Regeneration.  The Multiverse Monstrosity regains 3 hit points at the start of its turn.

Invisible to this Reality.  As a bonus action, the Multiverse Monstrosity can turn invisible.  This can last indefinitely, until the creature attacks.  It must use a bonus action on its next turn to return to invisibility.

Magical Weapons.  All attacks by the Multiverse Monstrosity are considered magical.

Multiattack.  The Multiverse Monstrosity may attack with its Energy Surge twice per round.

Fuse Matter (Recharge 6).  The creature reaches out to a victim and attempts to fuse its material form with nearby physical matter.  The creature must make a DC 23 Constitution saving throw or find themselves melding with the targeted surface.  A failed saving throw causes the victim to take 55 (10d10) force damage.  If the creature is killed by this attack, their features are horribly spliced with the surface they were fused with.  Otherwise, the target appears in a space next to the chosen surface.  A successful save causes halved damage. 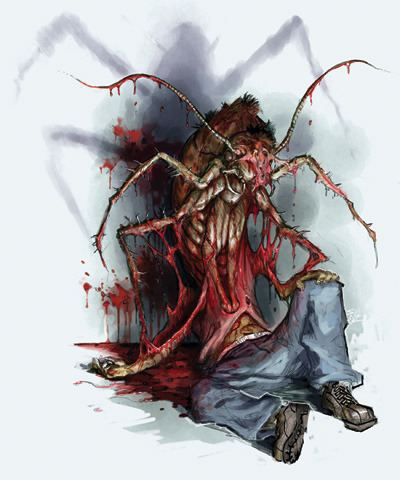 A vile parasite, born from the most heinous concoctions of urban refuse, waste and shadowy power.  These creatures thrive within the flesh of the living, until they are ready to emerge and propagate once more.  They wear the skin of the victims like a zombie puppet until they ready another attack.  These are creatures of pure body horror.  Often, they hide within the confines of particularly filthy environments, usually cities or industrial zones.

Their communication is typically through chemical pheromones and antennae twitches.  However, inside of its host, it can replicate any languages that it would have known, obtained through eating the brain.

Ready for a host, the new roach thing readies for a victim.

Take Host.  Without the help of another Roach Thrall, a hatchling may still make the attempt to take a host body.  After hitting with its bite attack, the hatchling may use a bonus action and the target must also make a DC 11 Dexterity saving throw.  Upon success, the monster is removed.  Upon failure, the creature burrows into the subject and begins the Roach Thrall Metamorphosis process.

The fully fledged form, ready for action.  At the right moment, it bursts from its skin puppet, ready to take on and possibly infect more victims.

Languages whatever its host knew in life, Roach Thrall

Host Suit.  The Adult Roach Thrall tries to maintain a facade within the flesh of its chosen host.  As long as it has its temporary hit points, the disguise can hold.  After losing it, the flesh is too damaged and the roach emerges by taking a bonus action.  Likewise, it can emerge normally by doing the same.  Otherwise, it cannot use any actions that require its reveal, including its abilities from Multiple Limbs.

Humanoid Disguise.  Unless investigated, the Roach Thrall looks like a normal humanoid creature, while disguised.  In addition, the Roach Thrall is double-proficient in checks, as if it were using a disguise kit with Intelligence.  Should a target try to see through their disguise, they may attempt a DC 14 Intelligence (Investigation) check with disadvantage.

Infest (Recharge 5 or 6).  After a successful Bite or Claw attack, the Roach Thrall may attempt to force a larva into a potential host target.  The target must make a DC 14 Constitution saving throw.  Failure results in the target taking 7 (2d6) piercing damage and suffering 1 level of exhaustion.  They are now infected.  Success merely causes half damage and no further effects.

Multiple Limbs.  Should the Roach Thrall decide to do so, it may walk upright like a humanoid.  Should it take the gait of a regular roach, its speed increases to 40 ft.  However, it cannot maneuver items while doing this, it can only while upright.

Multiattack (Reveal Only).  The Roach Thrall may attack up to four times per round.

When a Roach Thrall hatch-ling has successfully entered and infested the body of a subject, it begins to weave a cocoon and changes like a caterpillar does, into its next form.  As it does this, it knocks the victim into an unconscious state as it consumes their nervous system, organs and brain, before using its own to replace it.  Finally, the mature form emerges within its host flesh suit.  Sometimes, it will try to maintain its body for countless years, slowly mutating into a more powerful form.

Initially, the target host is infected.  Following the method, the target succumbs to exhaustion and passes out within 4 – 8 hours.  However, at this stage, using a Lesser Restoration or Greater Restoration spell will kill the young roach thing.  Alternatively, dangerous surgical techniques can be attempted to remove the roach thing.  Performing this surgery requires a DC 18 Medicine check with the proper tools and will cause 14 (4d6) piercing damage to the target that cannot be reduced.  Should the check fail, roll the damage again and add it to the total.  The victim is also still infected.

Otherwise, the process continues.  Even if the target dies, the Roach Thrall can continue with the process.  During this period, the body liquefies and reshapes.  Devouring and replacing parts of the victim, it assumes full control over the body.  Its use of feeding system and nervous system stimulates the body to prevent decay.  At this point, it becomes an adult.

Figuratively, any creature can be made into a Roach Thrall by giving it the Host Suit trait.  When the creature “dies” or when the thrall is tired of that form, it’ll shed it and use the normal Roach Thrall stats (with possible adjustment to fit the host creature).