Ghost of the Past

A blip in time at its core.  These ghostly images are beings stuck in a frame, a single moment.  To them, it’s comforting.  The world around them has changed since they were gone from this world.  However, their haunted abodes are comforting reflections of a simpler time.  When confronting such apparitions, it’s best to play along with things on their terms, lest you incur their wrath.  However, many will exploit this by performing all means of wicked deeds in secret, while keeping up their innocent demeanor.

Dissonance.  Ghosts of the Past are literally stuck in the past.  Encountering things from beyond their era contrasts with their ways of thinking and builds up aggression.  Should they encounter too much at once, the ghost turns hostile and any pleasant facades go away.  Without spending an action, it enters its “Ghost Form”.

Languages Any languages it knew in life

Incorporeal Movement.  When a Ghost of the Past turns aggressive, it gains the ability to phase through solid objects, as if it was difficult terrain.  Ending in a solid object causes 5 (1d10) force damage to the ghost.

Normal Folk.  While a Ghost of the Pass is indifferent in mood or better, it can pass off as a living humanoid.  Likewise, spells that would detect Undead or protect from them do not affect the creature while it’s not hostile.

Relaxing Haunt.  A Ghost of the Past designates an area as its own.  It’s often, in reality completely dilapidated and in disrepair.  However, its influence has it look as it did when the ghost was alive.  As long as the Ghost of the Past is in a passive state, the nearby environment reflects that.  However, once the ghost has become hostile, the environment reverts to its original self.  Everything that was part of the ghost’s claimed territory becomes just as rotten as it is.  However, a DC 15 Intelligence (Investigation check will reveal that the disguised setting is fake.

Possession (Recharge 6) (Ghost Form Only). One humanoid that the Ghost of the Past can see within 5 ft. of it must succeed on a DC 13 Charisma saving throw or be possessed by it; the ghost then disappears, and the target is incapacitated and loses control of its body. The Ghost of the Past now controls the body but doesn’t deprive the target of awareness.  It can’t be targeted by any attack, spell, or other effect, except ones that turn undead, and it retains its alignment, Intelligence, Wisdom, Charisma, and immunity to being charmed and frightened. It otherwise uses the possessed target’s statistics, but doesn’t gain access to the target’s knowledge, class features, or proficiencies. The possession lasts until the body drops to 0 hit points, it ends it as a bonus action, or the it is turned or forced out by an effect like the dispel evil and good spell. When the possession ends, the Ghost of the Past reappears in an unoccupied space within 5 ft. of the body. The target is immune to this Ghost’s Possession for 24 hours after succeeding on the saving throw or after the possession ends.

The sheer agony felt by a collective conscious of living beings can be so great in death that it carries over to things around them.  In the case of a tragedy in a vehicle, it’s recreated in a haunt.  Crashed carts, sunken ships and more become ghosts all their own.  They haunt all their own, on whatever path lead to its demise.

These are often civilian crafts, completely unarmed at that, caught up in circumstances outside of their control.  But, this isn’t always the case.  Sometimes, war ships are victims to the cold depths below too, often as a result of a deadly battle.  These ships appear slightly marred by whatever destroyed them.  However, these scars are reminders that things are not what they seem.  Only later, once the haunt has truly begun, do these scars fully revealed their story.

NOTE: This allows for more modern style vessels by creating a general range by accounting for a higher number of people, higher amount of cargo and more.  Should this feel too great, utilize the Of Ship and Sea rules from Ghosts of Saltmarsh accordingly.

When applied to a ship based vehicle, such as the examples found in the Dungeon Master’s Guide as well as Ghosts of Saltmarsh, it gains the following changes:

A Ghost Ship should be considered more of an environmental hazard/obstacle rather than a monster all its own. 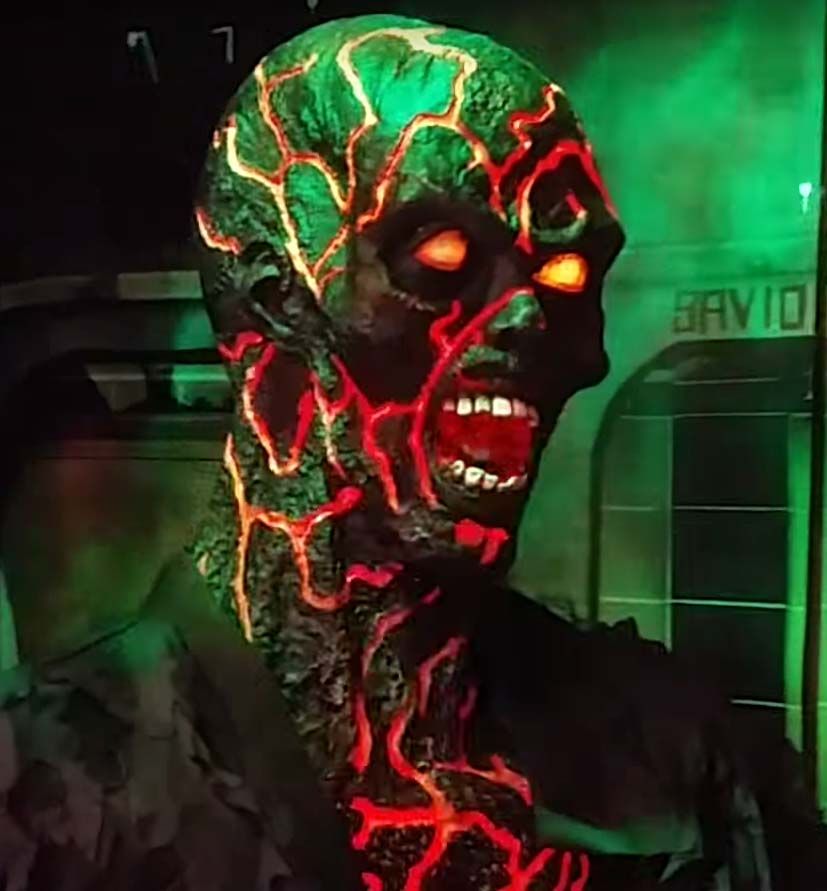 Bodies horribly ravaged and scorched after an unholy pact with a devilish being.  When called back to the world, the corrupted soul inhabits the brutally burned body, seeking to unleash as much evil as possible.  A Hellbound Corpse is quite easy to spot, either by the putrid smell of smoldering flesh or from its obvious disfigurement.  Those who either have a stronger conviction or stronger pact tend are reflected as being much stronger themselves.  Otherwise, most of these creatures are intelligent zombies with an underworld curse.

Languages speaks what it knew in life; plus choice of Abyssal or Infernal

Magical Resistance.  The Hellbound Corpse has advantage on saving throws against magical effects and spells.

Rock Charred Flesh.  When hit by a melee attack, the attacker must make a DC 14 strength saving throw.  Upon failure, they take 6 (1d12) fire damage and their weapon is stuck inside of the Hellbound Corpse.  In order to dislodge and free the weapon, the target must use an action to attempt a DC 14 Strength (Athletics) check.

Sneak Attack (1/round).  When next to an ally, attacking with surprise or attacking with advantage, the Hellbound Corpse may add 17 (5d6) damage to its Dagger attack.

Unholy Cunning.  The Hellbound Corpse may use its bonus action to take the dash, disengage or hide actions.

Significantly more powerful hellish undead.  Their pact with the forces of darkness is far stronger too.  The Greater Hellbound Corpse has the following changes made to its stats:

Multiattack.  The Hellbound Corpse may attack twice per round.