Beyond the sick mockery known as Evernight is a road of flames and magma, a pathway of fury.  The magma that flows from the Charnal Mount burns all and taints it with its hellish river.  The Ash Tree is one result.  These plants have been transformed to inflict infernal wrath upon those who get too close.

Plane of Origin: Deep Ethereal – Demiplane – Evernight was a strange attempt at mirroring Neverwinter.  The original vision failed.  In fact, the copy of Mount Hotenow quickly became a violent volcano, that flooded what would have been the river passage with lava.  To this day, Evernight’s river way is a steady lava stream.  Plus, the burnt out land was changed by this faulty copy.  The land grew angry with its own flames of hate, thus came about the Ash Tree.

Chill Delay.  If the Ash Tree takes cold damage, it must make a DC 10 Constitution saving throw.  Upon failure, it makes its Fiery Slam attack with disadvantage for that turn. 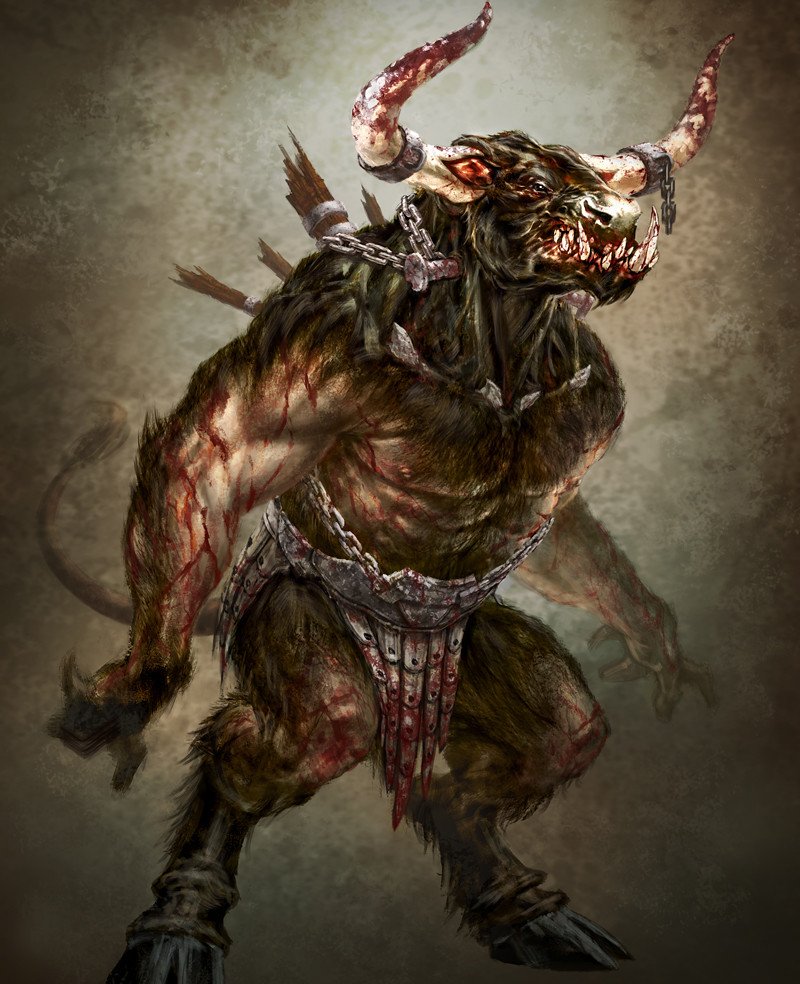 The Feral Wyld is a corrupt mirror of nature itself, filtered through Lower Planar energy for evil forces.  Creatures changed by its essence become mockeries of beasts, through an equally demonic mirror.  These servants to the dastardly find themselves progressing further into fiendishness as they aid their underworld masters.

Plane of Origin: Deep Ethereal – Demiplane – The Feral Wyld is a cross collaboration with evil forces of violence and nature.  While their goals were ultimately revenge against the civilized world, they  wish to spread their darkness to any point that its odious claws can touch.  And this very wickedness is also the origin for the beastfolk in much of the multiverse, but few know their demonic origins.

This template can be applied to any beast type creature.  It gains the following qualities:

As the above, but with the following alterations to better fit plant-based creatures: That which dwells in the City that Waits.  These living dead are dried up and cold, chilled by the void that whirls around this city of spires and bridges.  Often, these corrupted corpses will stay dormant.  They lie within the chilled city, until some force of life accidentally brings them back into being.  Stretched, frosted and gaunt; these zombies look more like frost-covered humans than fully rotten living dead.  Their dark origins date back to their home world, where a theocratic state dedicated to the Demon Lord, Orcus, lost faith.  He punished them by placing a curse that would cause them to sleep until they say the dawn light.  He also moved the city to a demiplane, tied to the Negative Energy Plane, to prevent that.  The denizens died over time, brought back as slumbering zombies by the demiplane’s power.  They only return to life when an outside life force comes too close.

Plane of Origin: Prime Material – Ranais – A wicked city, even in ages past.  This domain was once an evil theocracy dedicated to the Demon Prince of Undead, Orcus.  When the people of the city slowly rebelled against the ideas of Orcus, he quickly grew angry.  The city retaliated.  Orcus replied with the total scorching of that world, taking the city away as punishment.  He cursed the inhabitants and the city itself to suffer for their transgressions against him.

Undead.  The Moilian zombie has standard abilities of the undead, such as not needing food or drink.

Moilian.  While in the city of moil, the negative energy influence saps away the health of living creatures, 1 point per day.  In the case of Moilian zombies, they remain animated until the demiplane saps all of the hit points that they stole.  The zombie starts inert, at 0 HP until it leeches off life.  It cannot leech more than its maximum hit point value.

Life Sapping Aura.  Any creature that moves into or starts its turn within 30 ft. must make a DC 14 Constitution saving throw once per round.  Upon failure, the target takes 5 (2d4) necrotic damage.  The Moilian zombie regains hit points equal to the amount of damage taken from this ability.  In addition, the victim’s maximum hit points are reduced by that damage taken, requiring a greater restoration or related spell to restore them.

Frozen Stiff.  The Moilian zombie looks indistinguishable from a frozen corpse while idle.

Ultimate Undead Fortitude.  If damage reduces the Moilian zombie to 0 HP, it must make a DC 5 + damage taken Constitution saving throw.  Upon failure, the zombie falls unconscious but is otherwise stabilized.  Upon success, it returns to 1 hit points.  If the zombie is dropped to 0 HP with acid, fire or radiant damage; the zombie instead dies.  Likewise, it dies if it fails the saving throw.

Multiattack.  The Moilian zombie may attack with Slam twice per round.

Frost Wave (Recharge 5 or 6).  All creatures within a 30 ft. cone must make a DC 14 Dexterity saving throw or take 18 (4d8) cold damage and become paralyzed.  Targets may attempt a new saving throw at the end of their next turn.  Success causes half damage and no further effects.

Angels of Death, if you wish to call them that.  They are guides, judges and overseers for the spirits of the dead.  They’re the ferrymen to help carry souls to the next life.  Well, that’s typically Charon.  But, many still take up that job in one way or another.  While many have a particularly grim look, they’re not inherently bad.  Many prefer balance within the realm of order.

Plane of Origin: Concordant Opposition – The Outlands – The Dimension of the Dead, rumored to be somewhere drifting in the void.  In reality, this cosmic bubble is within the Outlands itself!  Even stranger, it connects to “other cosmologies”, such as that of Mystara.  Many travelers often get this wrong, due to the distant and detached nature of this realm.  As long as the realm has been around, it has needed aid in the form of the divine spirits, the psychopomps.

Death Sense.  As an action, the psychopomp can study a creature within 60 ft. of it.  The psychopomp will automatically know how healthy they are, as well as any conditions and how close to dying they might be.  However, this is all present knowledge.

Deathly Shrouds.  A gloomy energy hangs over the psychopomp, protecting them from harm.  Add their Charisma modifier (+5) to their armor class.

Innate Spellcasting.  The Psychopomp has innate spellcasting ability, using Charisma (DC 16) as its spellcasting stat.  The psychopomp knows the following spells innately, without the need for material components:

Lorekeeper.  The psychopomp has doubled proficiency when recalling a piece of lore or knowledge with an Intelligence check. 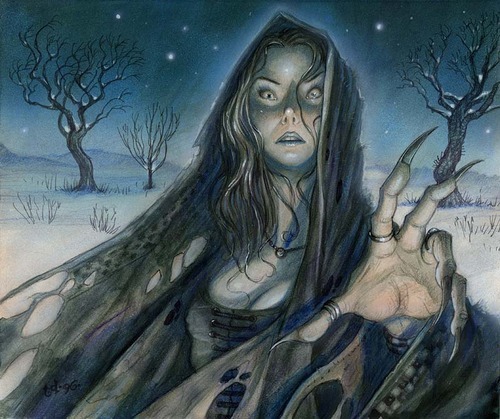 The Shades.  Those who were altered by the Demiplane of Shadows to survive.  The largest population of these people are the Netherese mages of Abeir-Toril.  These mad mages endured countless calamities and oversaw the rise of new empires from their shadowy retreat.  Over time, they have been looking to influence the new world from afar.  However, they also enjoy their secrecy.

Plane of Origin: Ethereal – Demiplane – The Demiplane of Shadows is a strange and foreboding place.  Light and Dark, Positive and Negative.  Both cascade to form strange contrasts.  Even stranger are the affects of Shadowstuff on creatures of the material when exposed for too long.  They too become like the shadowstuff, becoming shades.

The Shade template can be applied to any humanoid, preferably human, creature.  They gain the following:

3 thoughts on “Eerie and Sinister Monsters – Creatures of Dark Realms”