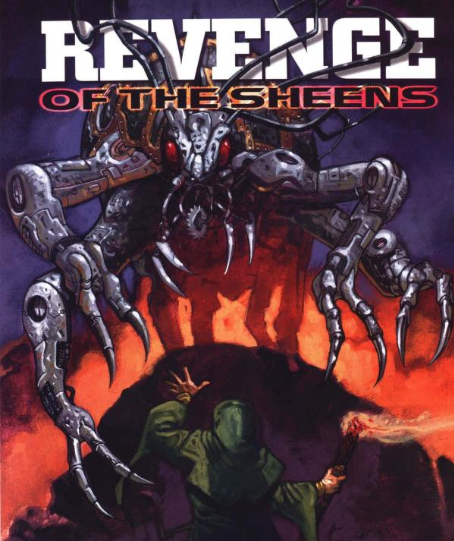 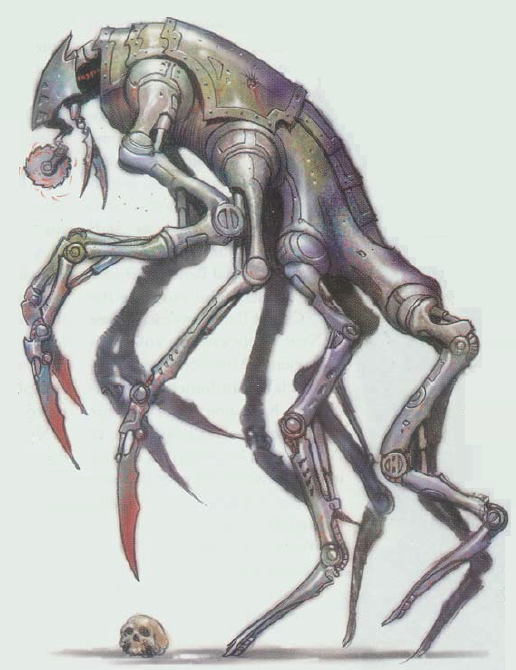 Towering sheens, built to rip and tear.  Their purpose is simple, combat.  They exist to defense the machine cyst while violently destroying organic life.  With its multiple arms, it can either hone in on a single victim or assault multiple ones.

Superior Electrical Discharge.  As a bonus action, the sheen may infused its own power into its attacks.  This deals an extra 7 (2d6) lightning damage when it hits with its next successful melee attack.  This effect lasts until the start of its next turn or until used.

Multiattack.  The sheen may make up to six blade arm attacks or two blade mandibles attacks.

Plasma “Breath” (Recharge 5 or 6).  The sheen unleashes a blasting surge of plasma energy from an apparatus on its mandibles.  All creatures within a 90 ft. cone from the sheen must make a DC 19 Dexterity saving throw or take 88 (16d10) plasma damage*.  Success results in halved damage.

Far larger than most victims will ever see.  Most of its body has a particular cone shape.  The burrower is a massive construct built for constructing of tunnel access ways, as well as mining particularly strong minerals.  In addition, it has more than enough fire power to retaliate, complete with a drilling laser that’s just as capable of fighting off foes as it is chiseling into rock.

Sheen Defensive Field (1/day).  The sheen can use a reaction against an attack to generate a minor force field.  When hit by an attack, the sheen gains 22 (5d8) temporary hit points.  These last for up to 1 hour.

Submerged Tactics.  The sheen can use its Plasma Needle attack from melee or range, even when underground.  This can also count for a surprise attack.

Weak Arms.  Should the sheen suffer 10 or more damage from one hit, it must make a DC 12 Constitution saving throw.  Upon failure, it loses one of its attacks.  In addition, reduce plasma needle damage by 1/2 until all arms are lost.  Should it lose all arms, it will try to retreat from battle.

Multiattack.  The sheen makes up to six attacks with its stinger arms per round.

Orb-like, with many tentacle-like arms, the phaser is among the newer models of sheen to be created… and one of the most dangerous.  It has the ability to pass through solid matter.  While corporeal, this floating black globe pulses with ominous red light.  Its tendril arms can wield several hundred pounds, usually phasing with it.  One of its deadly methods of attack is to phase a victim within another object, causing heavy damage.  While not otherwise useful for combat, these sheen are valuable for data gathering and stealth.

Phasing.  The sheen can use its bonus action to phase through various materials, including the hardest of metals.  The sheen can then move through various walls and surfaces as if it had the incorporeal feature.  However, it cannot end its movement in a solid space.  Furthermore, should it be grappling a creature and dragging them through a surface, it can choose to apply its phasing to the target as well.  Should it end the target’s phasing (without taking an action) in a solid space, the target must make a DC 15 Constitution saving throw or take 33 (6d10) force damage.

Sheen Defensive Field (1/day).  The sheen can use a reaction against an attack to generate a minor force field.  When hit by an attack, the sheen gains 9 (2d8) temporary hit points.  These last for up to 1 hour.

A shocking and horrifying revelation, the Sheens are able to utilize and produce magical effects!  Built from the chassis of a Render unit, the arcanosheen is modified with a specific central tank unit that carriers an alchemical liquid.  This potent brew is useful for channeling its mystical powers.  Far more unsettling, the arcane essence that these sheens loot from mages allows them to copy and cast their own spells flawlessly.

The arcanosheen shares the stats of the render, with the following changes:

A colossal sheen unlike anything else among the Machine Cyst.  Despite its name, it looks more like an upside down dome, assembled for some great purpose.  Its many arms are often busy maintaining and altering lesser sheens, readying them for further campaigns of conquering.

Sheen Charger.  When a sheen enters the same area as the power tree and remains there for at least 1 hour, it regains any lost hit points, as well as used abilities.

Sheen Defensive Field (1/day).  The sheen can use a reaction against an attack to generate a minor force field.  When hit by an attack, the sheen gains 78 (12d12) temporary hit points.  These last for up to 1 hour or until this ability is used again.

Unified Attacks.  When using an attack that can hit multiple targets at once, the attack roll is rolled once and used for all targets.

Multiattack.  The sheen can use arm barrage up to four times per round.  It may attack with Energy Charge Shot twice per round.

*Plasma damage counts as both fire and radiant damage, for the sake of resistance and immunity.

**Laser damage counts as both fire and lightning damage, for the sake of resistance and immunity.

2 thoughts on “Revenge of the Sheens – More Mechanical Horrors!”