The Machine.  A testament to engineering and ingenuity.  Artificial life taken to the next form!  Whatever the case may be, these constructs are forged from a truly advanced form of artifice.  Many are made through a high technology not unlike many forms of magic.  Some are even crafted through rare forms of magical infusion.  These constructs are far more capable of thought that many predecessors.  Beyond their elaborate programming, some prove more than capable of having souls.  Such constructs truly achieve the joys of sentience.

Author’s Note:  ROBOTS!  I made a post many moons back, that I have since wanted to remake.  Plus, here are a few more ideas I’ve tossed around for general science-fantasy robot fun!  Plus, I decided to tie the Pathfinder settings(s) into Planescape/Spelljammer… for some reason.  Since my schedule is limited this week from preparation for and volunteering for a fair, things are broken up into chunks.  Expect more soon!

Machine made in the shape of humanoid form.  The android is truly advanced technology at work, far too advanced for many.  In the early years of their Golarionspace home, many of the denizens across the world couldn’t fully fathom the workings of the android.  This is because they were imported from a crashed starship amidst the Age of Darkness, a dreadful time upon the world.  While much of the alien life aboard the ship has either fled or died out, these constructed beings found a way to adapt and even find their way into the distant future of “The Diaspora”, the asteroid belt reaches that replaced Golarion.

Androids largely resemble humanoids, particularly humans.  Earlier models closely model humanoids, save for the glowing blue streaks that sometimes shine through their synthetic skin.  As later models began to develop their own identities, they slowly moved away from trying to mimic other races in favor of trying to look like their own.  Some favor more androgynous and neutral forms over anything closer to a specific sex or gender, as androids are incapable of organic reproduction and lack any related biological development.

Plane of Origin: Prime Material – Pact Worlds System/Golarionspace/Androffa – Supposedly born from a distant system entirely, they had long since made the planet of Golarion and beyond their new home. Due to their adaptable natures, many have gone beyond even the crash site of Numeria to see all that Golarion has to offer.  While the home world of Androffa has been largely disconnected from the Androids, many don’t feel a sense of loss from this…  Few remember anything about their home world at all.  But, just like tragedy hit Androffa, a major cataclysm hit Golarion.  Through some grand event, also known as , Golarion was gone.  Androids lucky enough to be off the world were spared a horrible fate.  But, from that disappearance, Absalom Station was born.  The station acts as a major hub for these sentient machine people.  The somewhat nearby barren and machine-filled world of Aballon also appeals to the Androids.  However, through a mixture of Androffan wormhole technology and Golarion planar magic, gates were opened leading to parallel universes… among them?  The Great Wheel!  The first of those travelers to make the leap?  The androids.  Later attempts were made by breaching strange gates through astral vessels surprisingly similar to spelljammers.  Once out in wildspace, these ships functioned quite well.

Constructed Origin.  Androids have advantage on saving throws against the charmed, frightened, paralyzed and poisoned conditions.  Furthermore, the android cannot be put asleep by magical means.

Replicant.  Androids perfectly resemble the race of their creators, at least when their synthetic flesh is on.  When trying to pass off as that race, they gain advantage on disguise related tool checks as well as deception related checks. 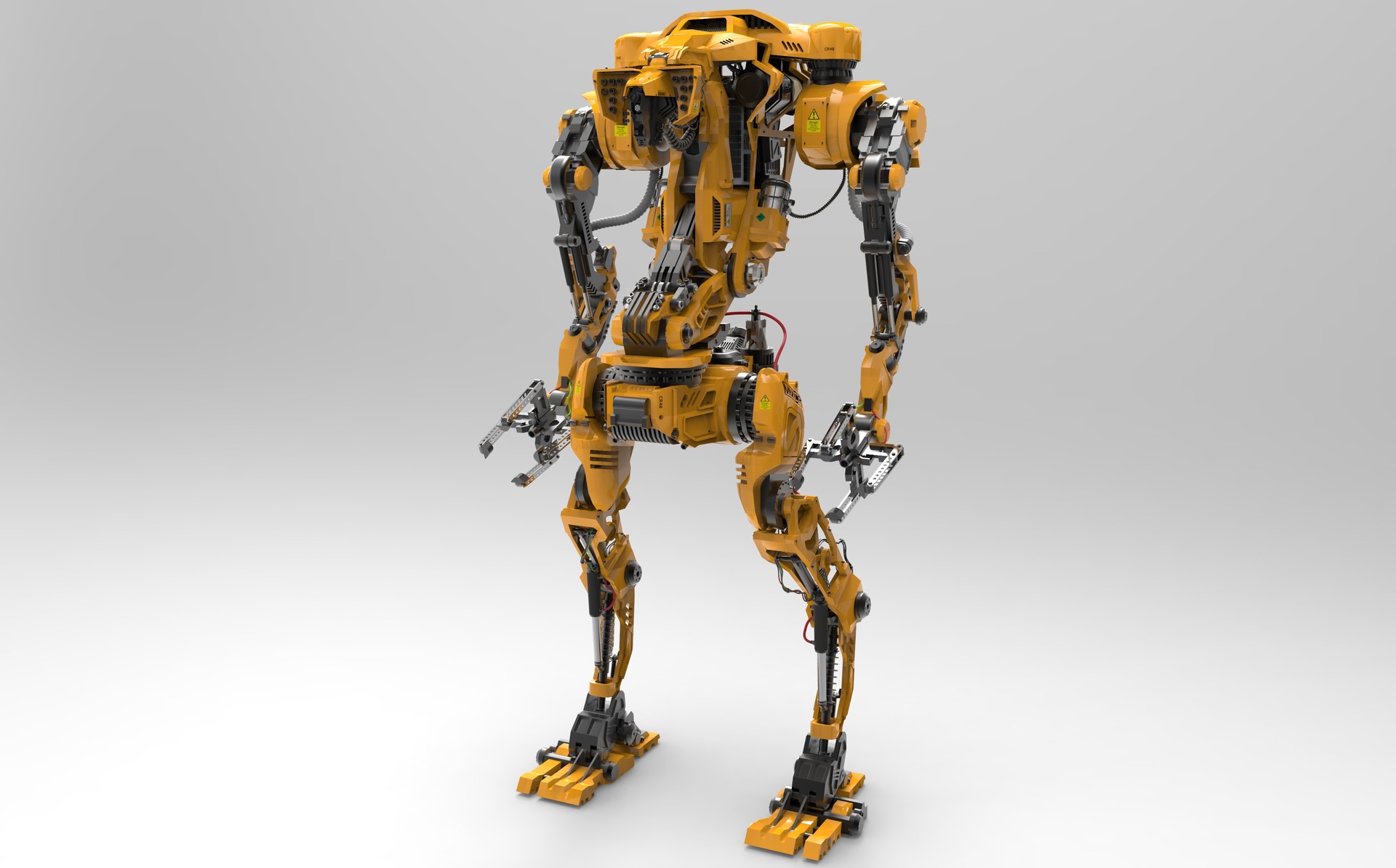 These bulky contraptions exist for construction, maintenance and repair.  While not combat-oriented, they’re plenty capable of re-purposing all means of tools for self-defense as well as defending their project sites.

While there is some level of variety, these robots tend to follow a similar blue print.  Most are typically bottom-heavy constructs with a variety of tools integrated into their creation.  Most have no resemble to living creatures, compared to more advanced constructs.  However, they are more than capable of intelligent thought, especially when computing various designs, engineering formulas and more.

Electrical Error.  If hit by lightning damage, the construct must make a DC 10 Constitution saving throw.  Upon failure, it goes berserk and will attack the nearest creature with its attack action.

Near Immovable.  The Constructor has advantage on all saving throws and checks against forced movement of any kind, including falling prone.

Robotic Marvel. The constructor is immune to any spell or effect that would alter its form.  Likewise, diseases do not affect it.

Trample.  When a Constructor knocks a target prone, it may use its bonus action to move onto the target’s space, making them Grappled (DC 15 escape check) and also dealing 16 (3d10) bludgeoning damage each round they and grabbed.

Work Construct.  All ability checks related to construction, crafting, repairing or the related are rolled with doubled proficiency. 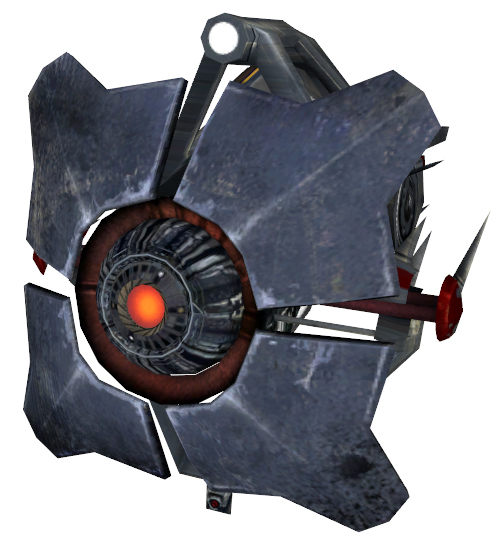 Minor mechanical security constructs.  Their purpose is to report anything out of line, while sometimes even bewildering and blinding a suspicious target.  Their ability to aid in combat is minimal beyond that.  However, they can prove to be a terror when multiple amounts of them are coupled with other forces.  It was said that in the empire’s fading years, Blackmoor created multiple amounts of these robots to ensure a surveillance state upon the public.  It’s partly this reason that secretive Mystaran scholars suggest that global war was what caused the Great Rain of Fire, due to Blackmoor’s increasing paranoia and aggression.

The Eye-Bot is a rudimentary robot.  It has a giant mechanical eye, hence the name.  This can zoom in and analyze various subjects, connected to a vast database.  Another function is its ability to create a flashing bright light.  This painful light can daze foes, much like a flash grenade.  Next to the eye if an alarm system, that can both alert any nearby security devices as well as produce a loud alarm sound of its own.  Beneath all of those mechanisms is a modified fan with “hover technologies” to allow it to fly about freely.

Alert.  As a reaction to either taking a hit or spotting an intruder, it can let out an alarm noise that is audible up to 300 ft. away.  This noise can carry through solid surfaces, but is greatly muted based on the thickness of the walls.

Robotic Marvel. The eye bot is immune to any spell or effect that would alter its form.  Likewise, diseases do not affect it.

Stunning Flash.  All creatures within 30 ft. of the Eye-Bot must make a DC 12 Constitution saving throw.  Upon failure, the target takes 5 (2d4) radiant damage and becomes blinded until the end of their next turn.  Success results in no damage or effects.

A more advanced version of the Eye-Bot (see below).  These machines are deployed in the event of a security breach.  Cheap to manufacture and arm, these drones are sent en masse to quell a threat, sometimes from afar.  Unlike the Eye-Bot however, they compute on a single-track mindset; annihilate any security threats.

These drones have a semi-basic design.  Four arms have hover discs to propel its main body upward.  Its central body contains several of the eyes like its predecessor.  However, it also has compartments to grab a variety of non-heavy weaponry.  These are often several types of firearms or other projectiles.  Modify the eye bot with the following: 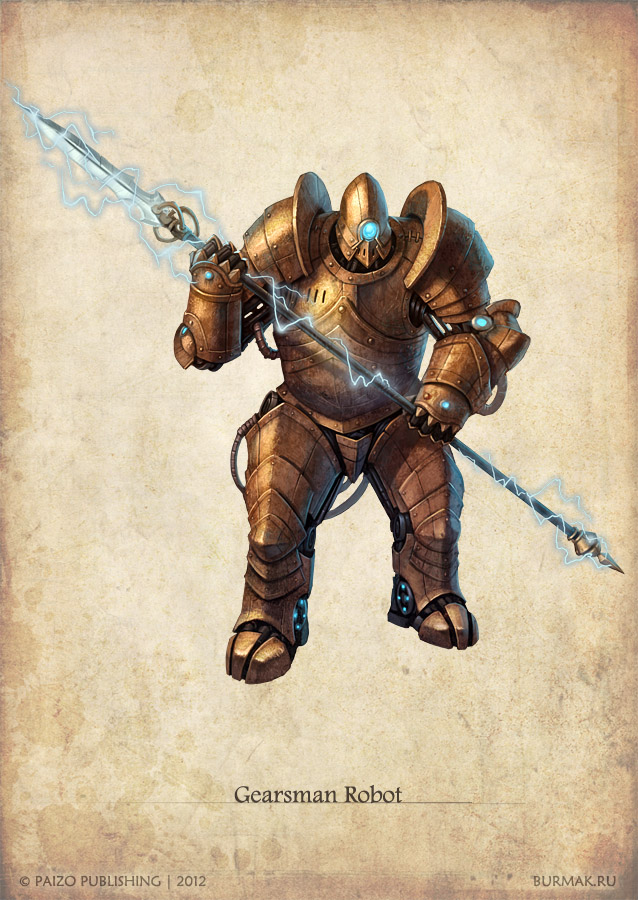 An imposing suit of armor stands before you, its head adorned with a massive glowing eye.  The machine knight moves towards you.

These constructs are heavily plated infantry.  The gearsman is built for durability and defense, at a premium.  It was likely that whoever constructed such a creation proved to be quite wealthy.

Adoptive Learning.  As a bonus action, the gearsman may add its proficiency modifier to an ability check roll it is otherwise not proficient with.

Electrical Error.  If hit by lightning damage, the construct must make a DC 10 Constitution saving throw.  Upon failure, it goes berserk and will attack the nearest creature with its attack action.

Nanite Repair.  Once per day, the gearsman can activate internal nano constructs to fix issues.  It regains 18 (4d8) hit points) as a bonus action.  Alternatively, it can heal another construct instead.

Robotic Marvel. The gearsman is immune to any spell or effect that would alter its form.  Likewise, diseases do not affect it.