The Fair Folk.  The Good Kingdom.  The Sidhe.  The Far Wanderers.  Whatever you want to call them!  They’re a blight!  Sour my milk and rot my crops, snatch up the neighborhood infants, turn the trapper inside out like a dinner food dish.  Can’t stand ’em, they must be pure evil!  You seen the mad witch beyond the hill?  Surely, she’s in league with them!  SHE IS! – Jerick Cormant, local farmer and general curmudgeon

The Fey, a description for mythic spirits of many kinds.  There’s even overlap with other planars and creature types too!  The undead, fiends, celestials, even elementals.  To some, fey is just a label for the spiritfolk from ethereal realms beyond, fascinated by our mortal world.  Many have taken permanent residence beyond the mainstays of mortal civilization.  Often hidden, the fey watch and observe for a variety of reasons… some more benign than others.

Author’s Note: Faith of Brynvalk is hosting the June 2019 RPG Blog Carnival with a Fae theme to it.  So, I figure that it’s not too much of a divergence to make a fey themed post in the middle of my planar theme.  You’ll see a mix of updated old monsters and a few new ones!  Enjoy! 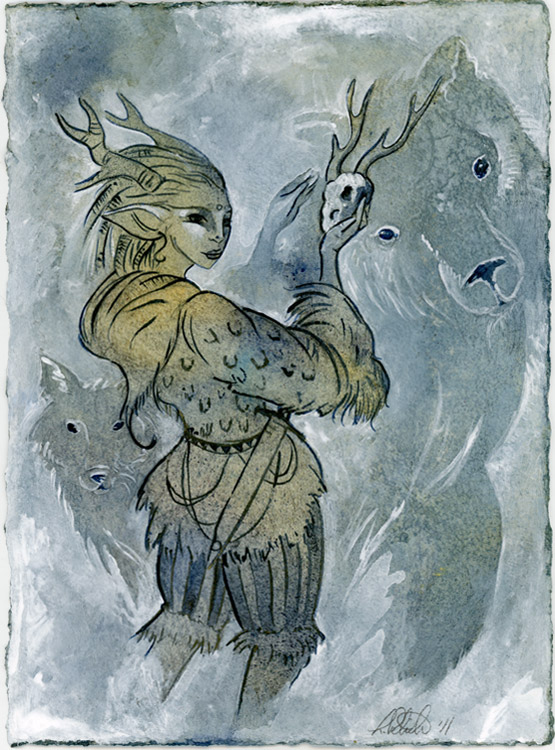 While similar to an elf of the Prime Material, the Ælfr hail from their own distant realm.  These creatures thrill to the hunt, otherwise shy to interact with outsiders.  Their secretive nature often keeps them away from others, especially those who don’t get along with fey.

Death Throes.  When the Ælfr drops to 0 hit points or died, it becomes hard like stone.  If a melee weapon caused this, it becomes stuck in the body.  Removal warrants a DC 11 Strength check.  Doing so causes the body to break apart into rubble.  Any non-magical equipment on the Ælfr also crumbles.

Hunter’s Fortune (1/day).  When the Ælfr first takes damage, it gains advantage on its next attack roll or saving throw.

Innate Spellcasting.  The Ælfr is capable of using spells, with Charisma at their casting stat (DC 12, +4 to hit).  The Ælfr may cast the following, without Material components:

Woodland Stride.  Ælfr are not impeded by natural difficult terrain.

Sylvan goblins tend to be far more wily and energetic than their material plane relatives.  Their fierce energy and raw impulse is contested by few others, even those around them.

Innate Spellcasting.  The Faerie Goblin can cast spells innately, using Charisma for its spells (DC 12, +4 to hit).  It may cast the following: without a Material component:

Invisible Sneak  (Recharge 5 or 6).  At the start of the goblin’s turn, it can become invisible as a bonus action until the start of its next turn.  If it uses a spell or takes an attack action, this effect ends.

Fox spirits that are said to be connected to great beings.  These form changing foxes gain more power as they gain age, represented by their many tails.  Despite their playful and tricky nature, some can prove to be quite blood thirsty.  Like fire, they are uncontrollable and have a certain free attitude to them.

Fey Heritage.  Kitsune have advantage on saves versus charm effects and are immune to sleep effects.

Innate Spellcasting.  Kitsune are capable of casting spells innately, using Charisma as their casting state (DC 13, +5 to hit).  The kitsune can use these spells without Material components:

Magical Resistance.  The Kitsune has advantage on saving throws against spells and magical effects.

Shapechanger.  The kitsune may use its action to change forms.  It may go between a small fox to a medium humanoid (typically resembling a human or an elf).  Besides change in speed, armor class and attacks, the stats otherwise remain the same.

Commonly considered capricious and greedy, the Leprechaun is a fey spirit that rarely deals in the affairs of outsiders, except for some good old-fashioned trickery.  They’re typically preparing tricky puzzles and witty crafts to keep outsiders away from their magical rainbows and stash of gold.

Innate Spellcasting.  The leprechaun can cast spells innately, using Charisma as its casting stat (DC 12, +4 to hit).  It can cast the following, without a Material component:

Treasure Horde.  When a creature finds a leprechaun’s pot of gold, the leprechaun becomes defensive.  They gain disadvantage on all skill checks until the opposing creature decides to leave the leprechaun alone.

A Stone’s Throw.  Ranged Weapon Attack: +3 to hit, ranged 30/60 ft., one target.  Hit: 5 (1d4 + 3) bludgeoning damage.  The target must make a DC 12 Constitution saving throw or suffer disadvantage on the next skill check or attack roll that they make until the end of their next turn.

Run Away!  When the Leprechaun’s HP is brought down to 10 or less, it may use a reaction to conjure and ride upon a rainbow.  It uses its movement (without provoking opportunity attacks) to travel the rainbow.  Creatures may attempt to spot the leprechaun with a DC 13 Wisdom (Perception) check. 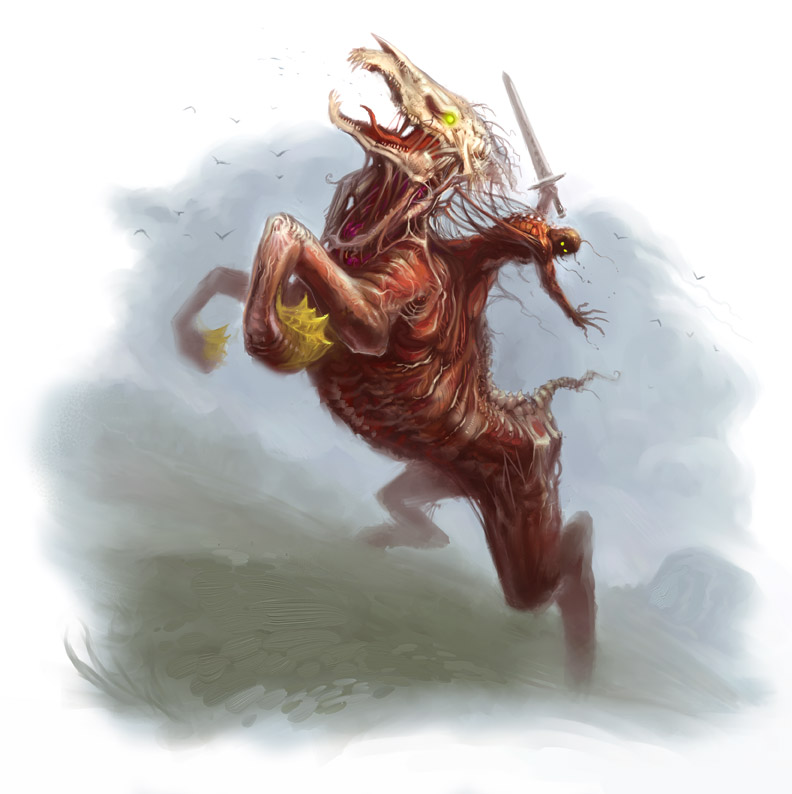 It happened one day in a ring by a farm
Some that tragically brought us much harm
How could a place abundant with charm
Create such a beast with a spear for an arm.  – Bard’s Tale

The Nuckelavee is corruption and filth incarnate.  What spawns such a creature?  Few know.  But, it haunts island reaches, making horse farmers’ lives miserable in particular.  The creature itself looks like a humanoid body from the waste up grafted to a horse-like creature.  Both figures lack skin, with muscle, bone and sinew exposed to the air.  More frightening than its appearance is the dreadful disease it carries, a foul wasting plague that’s even more killer against livestock.

The nuckelavee is not required to breath, drink, eat or sleep.  However, it may choose to do so if it wishes.

Amphibious.  The Nuckelavee, while it doesn’t need to breath, is capable of breathing in both air and water.

Morphic Arms.  The Nuckevalee may change its arms to two spears and back, without taking an action, once per round.

Underwater Stalker.  While in water, the nuckelavee has advantage on Dexterity (Stealth) checks.  It may also use these checks as a bonus action.

Multiattack.  The Nuckelavee may attack with Arm Spears or Hooves up to 2 times per round.

Rancid Breath (Recharge 5 or 6).  All creatures within a 30ft. cone must make a DC 15 Constitution saving throw or take 27 (6d8) necrotic damage and gain the effects of Mortasheen.  Successful saves take half damage and no further effects.  Beasts, Plants and related creatures have disadvantage on their save against this effect.