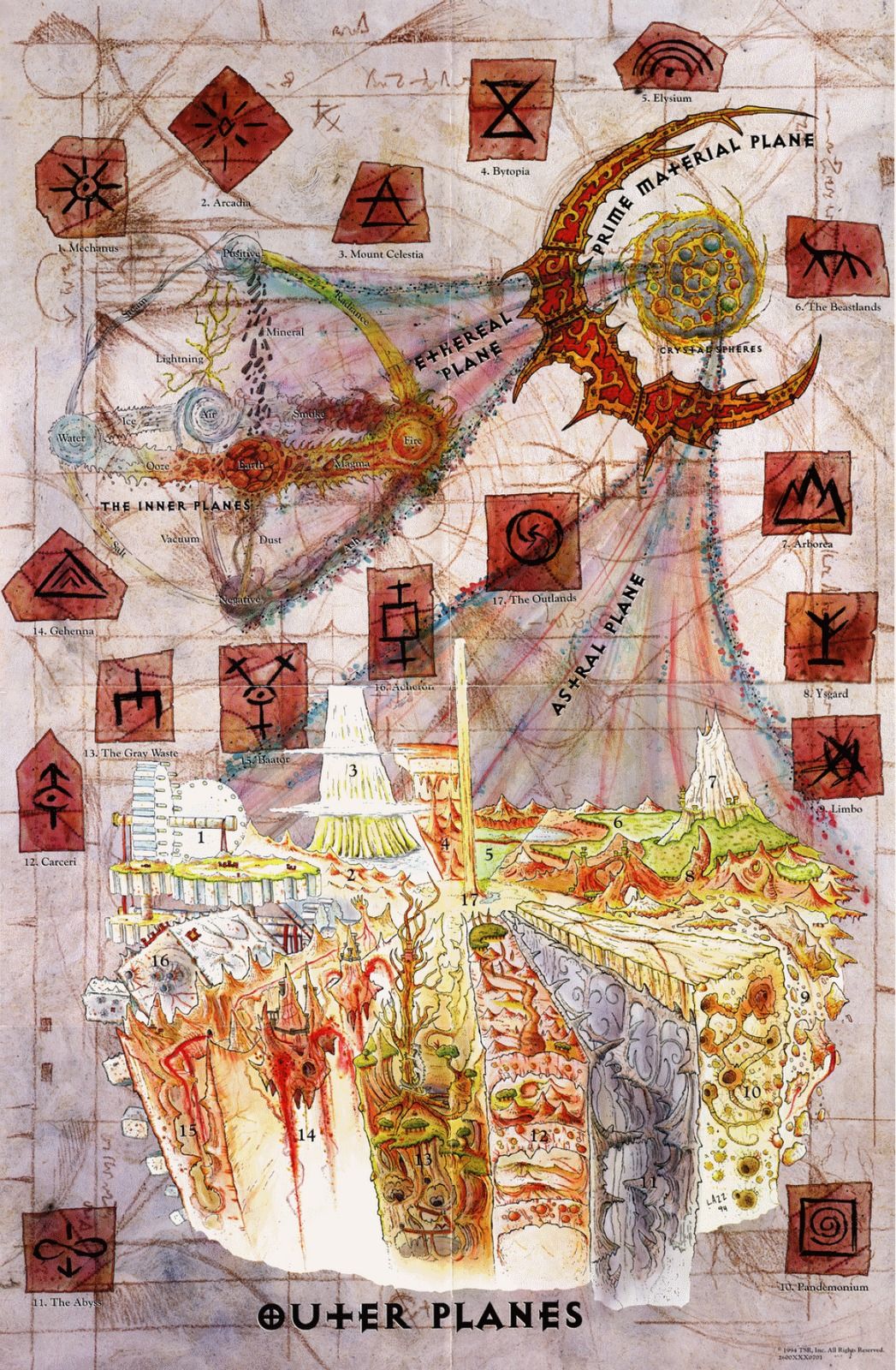 There are a lot more strange planar creatures where that came from.  In fact, we’ve only just scratched the surface.  From technomagical bioweapons to distant watchers to strange experiments, the planes offers many mysteries.

Author’s Note: Last week had all Planescape stuff…. and this one has a couple that, well, aren’t.  I dunno what prompted me to convert an obscure Pathfinder monster from Reign of Winter adventure path, but it’s in there too.  Likewise, I added a jokey monster my sister came up with.  Enjoy!

A shadowy and wispy creature sports bat-like wings and fierce claws from the paraplane of smoke.  It flutters in the depths, intently studying everyone.  It looks like it’s waiting for the perfect moment to strike.

Plane of Origin: Paraelemental Plane of Smoke.  Already a plane of vapors, smog and deadly screens; this place provides the perfect home for such a creature to blend in and live as it sees fit.

Smoky Form.  The Belker can compress itself into a formless puff of smoke, which can squeeze through surfaces 1 inch wide without issue.  It can also move into an enemy’s space before attacking.  However, gust related spells push the Belker up to tens to hundreds of feet if it fails its save.  Other spells like wind wall affect the Belker like a Hold Monster spell.

Smoke Claws.  The Belker’s shadowy wisps touch a foe, forming into solid mass within the victim’s flesh.  When the Belker hits with a Claw attack, it may use a bonus action to try to force its target to inhale part of its smoky wisps once per round.  The target must make a DC 14 Dexterity saving throw.  Upon failure, the wisps are inhaled and solidify into pointy barbs, dealing add an additional 14 (4d6) piercing damage.

Brought to this realm by a powerful planar explorer, their mission was to ensure that incredible knowledge of the planes was kept away from discerning eyes.  Ultimately, the Keepers betrayed their summoner to ensure these secrets maintained just that.  As to what the keepers are themselves?  None can really say.  Uncanny is the best way to describe them.  While they mimic humanoids, they are truly far from them.

Plane of Origin: ???.  It is unknown where these beings have truly come from.  Some suspect they’re a project from Mechanus to study order in a manner better than the Modrons, but there is nothing to prove (or disprove) this theory.  Some feel they’re from another universe outright.  Rumors tell of a distant reality known as the Axis, with a dark and dour realm known to some scholars as “Shadows Fell”.

Dissolution.  A Keeper can choose to kill itself and dissolve into a poisonous mush as a reaction.  Upon doing so, it melts into a 5ft. square zone of dangerous poison.  Any creature that moves within or starts its turn 5ft. within the zone must make a DC 15 Constitution saving throw or be poisoned until the end of their next round.

Hivemind.  All Keepers within 500ft. of each other are in constant communication.

Multiattack.  The Keeper may attack twice per round.

Poison Spit.  Ranged Weapon Attack: +5 to hit, range 20ft./40ft., one target.  Hit: 9 (2d6 + 2) poison damage.  The target must also make a DC 15 Constitution saving throw or be poisoned and have their speed halved for 1 minute or until they succeed a save at the start of their next turn. This abomination has the head of a pigeon, as found on material worlds.  However, it has the body of human-like creature.  Curiously, they fly at a brisk pace when they flap their arms.  They are said to be the creations of a mad wizard dwelling in the Astral Plane.  Some have escaped into the Elemental Plane of Air.

Plane of Origin: Astral Plane.  With essence taken from various Primes, as well as the Elemental Plane of Air, these creations of insane whimsy are very much a native of the planes by themselves.  Despite being unfortunate creatures with little going for them, they’ve proved adaptable, even on other planes.

Bin Chicken. The Flying Failure has advantage on saving throws against the poisoned condition. 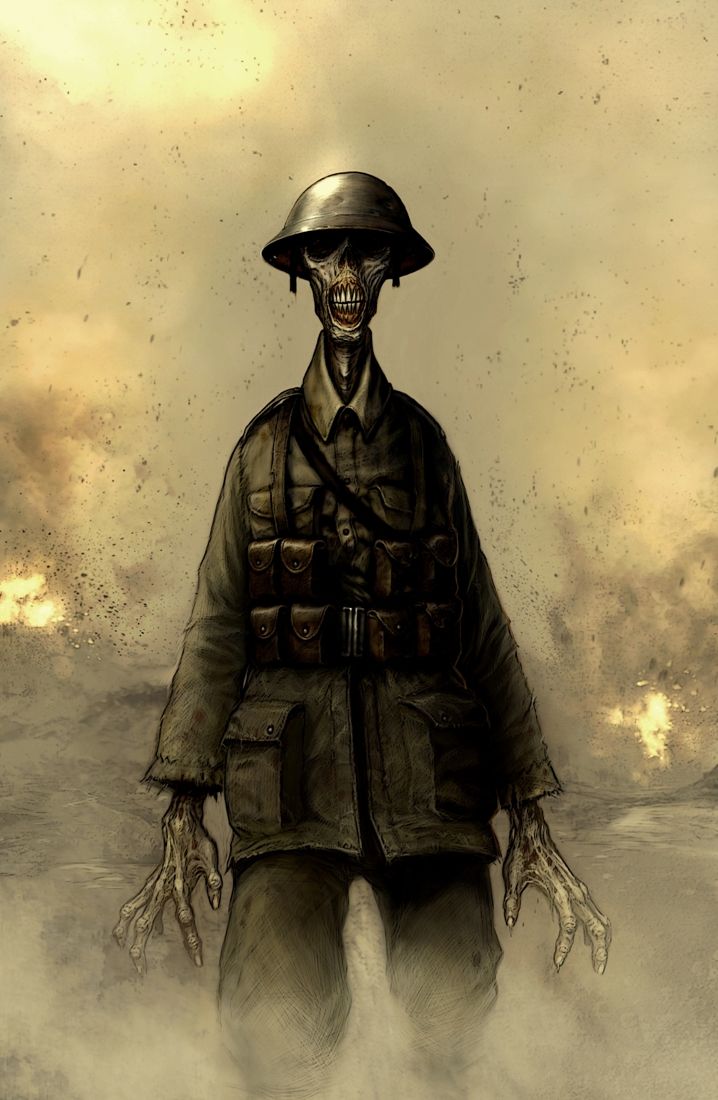 A vaporous and eerie mustard yellow mist lingers over a recently abandoned battlefield.  The cloud smells of foul odor, both man-made and natural.  The latter, the smell of rotten and melted flesh.  As it drifts, it emits an eerie sound, as if the cloud of strange substance isn’t just powered by something, it’s aware.  And worse, the corpses that it touches twitch with unnatural life, as they lift off the ground and lurch forward.  Despite being engineered, its roots are from the Negative Energy Plane, as well as the Elemental Planes of Air and Earth.

Plane of Origin: Hades, the Grey Wastes.  Originally fabricated as a Blood War weapon to create non-fiendish shock troopers for either side, something went terribly wrong during an experiment with a Material Plane known as “Terra”.  This world was already being torn apart by its own war.  An infused cloud of negative energy, air and earth mixed with foul chemical weapons to create a near unstoppable foe that turned soldiers against their former allies.

Animate Corpse.  Creatures killed by the Trench Mist are reanimated at the beginning of their turn.  They utilize the Zombie stats (or use the modified NPC stats found in the DMG), except they gain the elemental type rather than undead.  Furthermore, the zombies are immune to acid damage and can attack creatures within the mist as normal, rather than the creature being granted a concealment bonus.  Any Trench Zombies animated in this manner are hostile to anything that isn’t the Trench Mist.  Should the Trench Mist die, the Trench Zombies act like typical zombies, despite being elemental creatures rather than undead.

Dread Sight.  The Trench Mist can use its blindsight to detect living creatures, even through solid surfaces like walls.

Passing Cloud.  The Trench Mist can inhabit and move through enemy spaces, as well as tight spaces no smaller than 1 inch in length.  The cloud itself creates 1/2 concealment to all creatures inside of the creature.  Furthermore, it cannot trigger attacks of opportunity for leaving an enemy creature’s space, nor can it take attacks of opportunity.  Likewise, similar triggered effects are ignored.  However, if struck by a strong wind gust or a related spell, the Trench Mist takes 11 (2d10) force damage.

Toxic Vapors.  A creature that ends its turn inside of the Trench Mist must make a DC 18 Constitution saving throw.  Upon failure, they take an additional 5 (2d4) poison damage.

Multiattack.  The Trench Mist may attack up to two times per round.

A red four-armed being that is insectoid and reptillian, all around alien.  This creature is a ruthless hunter in the Ethereal plane, tracking and slaying any outsider who dares to trespass in their realm.  While not devils, their shared views of oppressive law make them occasional allies of convenience.  Some have even fought in the Blood War for devils.  While some are as sophisticated and cunning as the most dastardly of devils, some are merely brutes only interested in infecting outsiders with larvae.

Plane of Origin: Ethereal Plane.  The Xill are vicious hunters.  However, not all are cruel captors who use slaves for incubation.  Some are equally devious and wicked traders, information brokers and crime lords within the Ethereal and beyond.  All that can be said is they aren’t to be trusted.

Infest.  The Xill may choose to implant eggs within one grabbed, paralyzed or otherwise helpless creature as a bonus action.  The infected creature must make a DC 13 Constitution saving throw each following hour or lose 1 point of Constitution.  When the infected target’s Constitution becomes 2, it dies and 2d6 young Xills emerge.  These young xills are easy to kill and have no significant stats.  Casting greater restoration or a similar spell on the target before the incubation is complete can end the infection.

Lunging Bite.  The Xill may use a bonus action to make a Bite attack, if either a claw attack hits or the creature is paralyzed already.

Planar Leap.  The Xill has a unique ability to slowly phase between the Ethereal Plane and others as well.  During its turn, it may sacrifice its movement for the turn to instead become semi-corporeal, alongside any objects or creatures it is holding.  During this time, it has 3/4 cover.  If attacked, the creature must make a Concentration check, as if concentrating on a spell.  Upon failure, it ceases to phase out and returns to normal.  On a success, it continues to phase out of reality.  On its next turn, the creature vanishes to the Ethereal Plane, alongside whatever it was holding.

Multiattack.  The Xill may up to four melee attacks per round.  These attacks may be four claws, shortswords, or a mixture of claws and shortswords.  Alternatively, the Xill may make two shortbow attacks instead during its turn.

Claws.  Melee Weapon Attack: +5 to hit, reach 5ft., one target.  Hit: 5 (1d4 + 3) slashing damage.  The Xill may forgo damage to have the target grabbed.  The target must succeed a DC 13 check using its Escape action.

Bite.  Melee Weapon Attack: +5 to hit, reach 5ft., reach 5ft., one target.  Hit: 5 (1d4 + 3) piercing damage.  In addition, the target must make a DC 13 Constitution saving throw or become paralyzed for up to 1 minute.  The creature may attempt a new save at the end of their next turn.

The victim instead suffers 1d4 loss at the beginning of each day, which is truer to the original monster anyway.

Planescape and Spelljammer are properties of TSR/Wizards of the Coast.  Pathfinder is property of Paizo.  Made by Doctor Necrotic, for Doctor Necrotic media.  All rights reserved.

4 thoughts on “It Came From Another World – More Planar Creatures”