“Across countless planes and dimensions lie incredible creatures.  Such beings may be as mundane as one’s neighbor or far too alien to fully comprehend, perhaps even somewhere in between.  Different realities hold different possibilities… including different possibilities for existence as a whole.  I, your humble xenonaught, shall explore and chronicle the vast reaches of this known realm and beyond!” – Garvin Gorb, Fire-Blooded Genasi Sorcerer, Planar Researcher for the Great Library of Sigil

Throughout the D&D multiverse, there are a plethora of powerful monsters and strange foes.  In some instances, their desires and goals can be met easily, gaining a trusted ally in an alien realm.  Many wield powers never before seen by a denizen of the prime material plane, while others seem like familiar variants of the all too familiar.  Here is a list of a few examples of fantastical planar monsters and NPCs encountered on various worlds, planes and the like.

Author’s Note:  So, I’m getting back into the swing of things, slowly but surely.  Or at least, as best as I can during retail holiday season, as day jobs help pay the bills.  Anyway, I kinda dropped my horror content out of the blue.  Usually, I keep that ball rolling well into December, but I kind of dropped it this year.  Likewise, my patreon needs more updates than what I’ve been giving.  Anyway, I’ve been finding either older books or reprints on DM’s Guild lately and it has made me quite nostalgic.  While I can’t recapture those days with older editions, I figure I can transport some of my favorite things to the current edition.  I hope everyone enjoys this as much as I do.

The swarm gains the following: 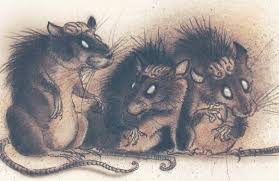 Cranium rats are said to be especially deadly in numbers.  This is especially true when the numbers swell to large proportions.  The chattering masses can unleash powerful psychic magic upon all sorts of foes, unleashing destruction wherever they go!  Some say that whatever hivemind that controls them becomes stronger with such high numbers.

Illumination. As a bonus action, the swarm can shed dim light from its brains in a 5-foot radius, increase the illumination to bright light in a 5- to 20-foot radius (and dim light for an additional number of feet equal to the chosen radius), or extinguish the light.

Innate Spellcasting (Psionics). The swarm’s innate spellcasting ability is Intelligence (spell save DC 15). As long as it has more than half of its hit points, it can innately cast the following spells, requiring no components::

Telepathic Shroud. The swarm is immune to any effect that would sense its emotions or read its thoughts, as well as to all divination spells.

Psychic Lightning (Recharge 5 or 6).  Ranged Spell Attack: DC 15 Dexterity saving throw, range 80ft., up to three targets that are no more than 10ft. away from each other.  Failure: 22 (5d8) lightning damage.  Success: Half damage. 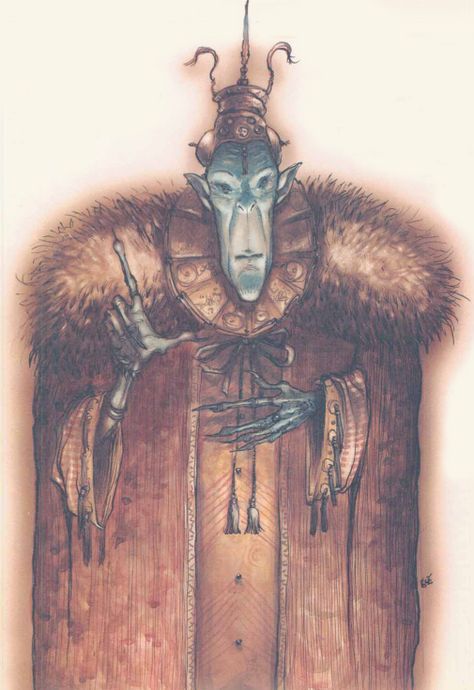 Tall and somewhat humanoid, this blue being wears flowing robes which compliment its eccentric movements.  It is wearing many expensive garments and fine gems.  Despite looking so tall and wealthy, they prefer to avoid direct conflict and are rarely adept to combat.  As such, they’re often seen around various bodyguards.

Appraisal Expert.  The Mercane may roll Intelligence, Wisdom or Charisma checks to appraisal or sales with doubled proficiency.

Innate Spellcasting.  The Mercane are well known for their mystical talents.  They use Intelligence as their casting stat (DC 15, +7 to hit) and know the following:

Magical Resistance.  The Mercane has advantage on saving throws against magical effects and spells.

Racial Empathy.  The Mercane have a minor telepathic boon.  They’re capable of sensing the pain of another Mercane within 5 miles distance.  On top of that, a successful Investigation check allows the Mercane to identify any culprit.

Literally, a glowing and spiritual paragon of the holy power.  Celestial souls of great warriors who fought for divine and just causes.

Ever Battle Ready.  The Per are well equipped for battle.  In fact, they’ll often use their knowledge of foes and tactics to size up an opponent.  After all, Per are not stupid warriors themselves.

Magical Weapons.  The Per’s sword functions as a +2 magical weapon, detailed below.

Angelic Weapons.  The per’s weapon attacks are magical. When the per hits with any weapon, the weapon deals an extra 4d8 radiant damage (included in the attack).

Ever Vigilant.  As the guards of upper planar realms, the per must always be alert.  They can never be surprised and have advantage checks to detect hiding creatures.  Furthermore, they will never retreat from battle and will always fight to protect what they believe in.

Innate Spellcasting.  The per is capable of various divine miracles, using Charisma (DC 18, +10 to hit) as its casting stat.  The per can use the following spells:

Magic Resistance.  The per has advantage on saving throws against spells and other magical effects.

Regeneration.  The per regains 5 hit points at the start of its turn.

Multiattack.  The per makes two attacks. 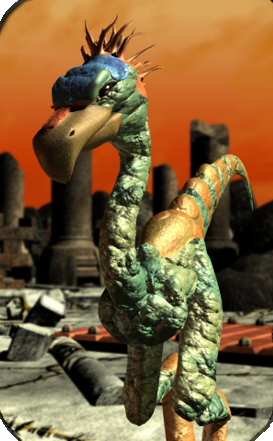 This often docile bird-like creature is typically found in the Outlands, where it darts around frequently in search of shrubs and berries.  If provoked, it will try to trample its foe.
(From Planescape Torment!)

Outlands Blood.  The Tricha has a unique quirk that makes it slightly resistant to magical energies.  It is considered proficient against all saves against spells and magical effects.

One thought on “Friends and Foes of the Multiverse – Planar Monsters”