“Ah, another wanderer wanting to carve up the land.  Surely, you don’t plan on heading to the caves of golden walls?  There are tales of sinister things that guard the glistening walls of incredible rock and earth!  No, friend, you should leave the golden cave down that way alone and continue on your way…” – Crafter-of-Words, a scout for the Clan of the Split Basin, trickster who loves pulling malicious pranks on settlers and travelers alike.

Here’s a continuation of my previous post.  These creatures are inspired by various beings from lore and legend.  Enjoy.

Author’s Note:  This technically marks post # 300!  Wow, that’s crazy!  Anyway, thanks again to all who support me!

Enigmatic faerie folk who live beyond the woods.  More often than not, they prefer to be left alone.  Those who wander too close to them are often met with a variety of tricks.  Sometimes, they are known to be very helpful spirits… but usually coincidentally.

Spell-Like Ability.  The Jogah is capable of a number of minor magical talents, using Charisma (+7, DC 15).  It can do any of the following once per day:

Turn Invisible.  The Jogah may vanish from thin air, using an action.  This ends at the end of its next turn or when it uses an action to attack.  Otherwise, it can uphold this ability and remain invisible.  All of the Jogah’s equipment can become invisible as well.

Far more dangerous than their generic kin, these spirits enjoy playfully throwing rocks with their powers at those who get near them.  Most of the time, they’re unaware of their impish behavior.

These Jogah are quite knowledgable, capable of helping outsiders who provide gifts of berries (especially strawberries).  They can also shapeshift into birds. 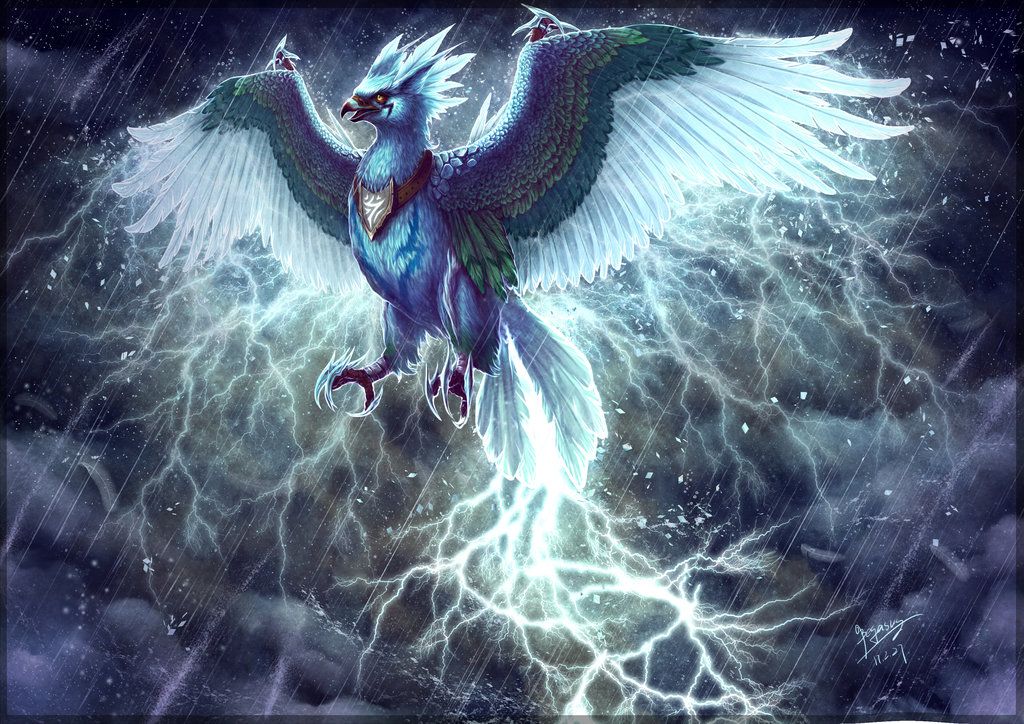 Protector, drifter, entity within the clouds themselves.  No matter what it is, the name is enough to send a chill down one’s spine.  A mix of terror and awe follows the mighty beast wherever it travels.  Those who dare to doubt the power of the thunderbird will know it soon enough.

Languages understands Common, does not speak

Flyby.  The Thunderbird doesn’t provoke opportunity attacks when it flies out of an enemy’s reach.

Keen Sight.  Perception checks made with sight are rolled with advantage.

Magic Resistance.  The Thunderbird has advantage against all magical effects and spells.

Stormy Aura.  The Thunderbird travels within the storm itself.  Creatures who start their turn within 30ft. of the Thunderbird must make a (DC 19) Dexterity Saving Throw or take 7 (2d6) lightning plus 7 (2d6) thunder damage.

Multiattack.  The Thunderbird may attack with beak or talons up to four times per turn.

The Thunderbird may make up to three legendary actions per round.  Some cost more than one action.  It regains lost actions at the start of its next turn.

Beak.  The Thunderbird attacks with its beak.

Recharge Storm (3 Actions).  Storm Blast recharges for next round.

Talons.  The Thunderbird attacks with its talons.

These creatures are vicious, territorial and bring horrid luck.  The oversized head brings terror into those who face it, seeking to drive it away or brutally mangle the victim.  One alone can displace an entire popular, if given enough time to do so.

Aura of Poor Luck.  All creatures within 30ft. have a roll (determined by DM) reduced by 1d4, once per round.

Multiattack.  The Flying Head may attack twice per round.

Dogmen from the frigid reaches, seemingly similar to the Lupines from the southern reaches.  They hunt within the powdery snow, blending in with an unsettling ease.  These ferocious beasts are more inclined to hunt down humanoids, compared to other beasts that dwell close to civilization.  However, the wintery chill travels with these beings.  They have the following features: