An unliving skeletal terror from the northern lands.  These howling creatures lay siege to foes with its frightening calls and seemingly unlimited tainted arrows.  Its strange and gangly proportions actually help it as a superior hunter.

Conjure Dread Arrows.  The baykok has the ability to gather a supply arrows made of dark energy.  As a bonus action, the baykok summons 1d4 + 1 arrows, which it may use for its attacks.  These arrows can only be used by the baykok and disappear when too far away or if the baykok is slain.  They count as +1 magical ammunition.  This is factored into the attacks.

Raking Swipe.  If the baykok hits twice with  its claw attacks, it may use a bonus action to attack again with its claws.

Multiattack.  The baykok may attack twice either unholy bow, twice with claws or a combination of bone club and claws.

Bone-Chilling Howl (Recharge 6).  All creatures within 30ft. of the baykok, that are capable of hearing, must make a (DC 16) Wisdom saving throw.  Upon failure, the targets are frightened and paralyzed until the end of their next turn.

A dreadful horned serpent, said to be nearly invulnerable.  These creatures are capable of rending the mind by simply staring at a victim in addition to devouring them with ease.  Far stranger, their blood from their fiery heart burns whatever it touches.

Maddening Visage.  When a creature first enters within 20ft. of the Unhcegila, it must make a (DC 16) Wisdom saving throw.  Upon failure, the target suffers one of the effects of “Unhcegila Madness” (Shadowfell Despair, Dungeon Master’s Guide, Page 52; roll a “1d3”, one for each option).

Multiattack.  The Unhcegila may attack twice per round with its tail slam.

Serpent’s Rebuke.  When hit with an attack, the Unhcegila may use a reaction to unleash a wave of burning blood.  All creatures within a 15ft. cone of it must make a (DC 16) Dexterity saving throw.  Those who fail take 7 (2d6) fire damage.  If the Unhcegila is brought to 0 HP, it may still use this ability and increase the damage to 14 (4d6) fire damage instead. 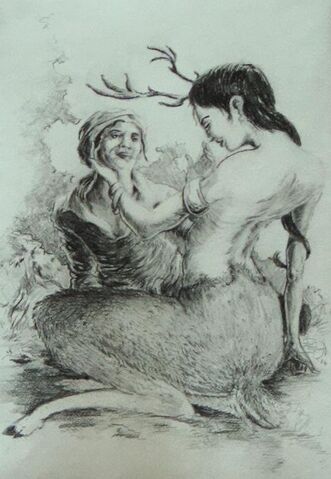 A wicked trickster, devoted to preying upon the lecherous, especially lecherous men.  This beautiful creature passes off as a wandering woman, save for the hooves she hides underneath a long and flowing dress.  When her victim is significantly distracted, she tramples the poor fool to death.

Secret Weaknesses.  The deer woman averts heading towards any place with lit tobacco, if possible.  Also, she will try to flee from a situation if her hooves are exposed too early.

Multiattack. The deer woman may either make a tripping kick and up to two tramples or three trample attacks.

Charm.  The Deer Woman uses her charms to sway wayward and foolish men. The deer woman can attempt to charm a male creature within 60ft. of her, causing them to make a (DC 15).  She can only maintain one charm at a time.  Non-heterosexual males, as well as females, aren’t affected by this charm.

NOTE:  More content is on the way, everything else will be tackled in a separate post at a later time!  STAY TUNED!

Pathfinder Wendigo is owned by Paizo.  Created by Doctor Necrotic, for Doctor Necrotic Media.  All rights and copyrights belong to respective owners.