“A Hairy Fish!  Ain’t it the strangest thing?  I tell ya, I actually caught one, right off the glacial expanse during a pioneering trip.  Don’t look at me like that!  This is REAL!  IT’S REAL!!!” – Gristle Pete, crazy old cook

Unbelievable!  Any attempts to convince someone of this creature’s existence are always made with disadvantage. A living legend and living little nightmare.  They say that crossing one of those and not taking the little critter down is a sure fire way to get a run of bad luck.  Trust me, you’ll know one when you see one.  Best make sure your aim is good.

Inflict Bad Luck.  Creatures stalked by a wrathful jackalope get bad luck.  As a bonus action, a creature within 60ft. of the jackalope must make a (DC 13) Wisdom saving throw.  Upon failure, they gain a bad luck hex.  Once per round, at DM’s call, roll a d4.  On a 1, the target’s next roll is made with disadvantage instead.  This effect remains until affected by a Remove Curse spell or completely a long rest.

Lightning Healer.  When hit with lightning damage, the jackalope instead heals 1/2 of the damage that would have been dealt to it.

Mimicry.  The raven can mimic simple sounds it has heard, such as a person whispering, a baby crying, or an animal chittering. A creature that hears the sounds can tell they are imitations with a successful (DC 13) Insight check. 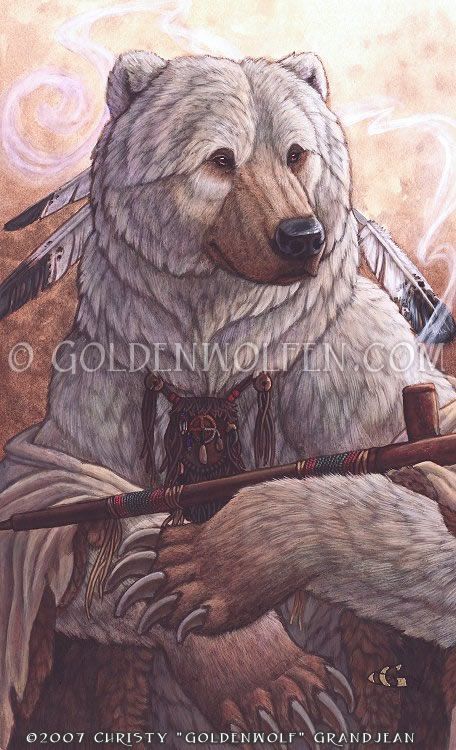 The Bearfolk, the ursine people.  They often live away from other beings, mostly because they hate company.  Keeping to themselves and their own, they’re not as big on trade.  However, befriend a bear person?  You have an ally for life.  Only a fool would make one mad.  You have the strength of a bear with the intelligent wits of sentience.  Of course, they don’t go out of the way to look for trouble, except when they’re really hungry.  Plus, almost all of ’em are trained for war at a young age.

Bear Rage (2/Day).  The bearfolk can enter a battle rage as a bonus action, as their fury drives their battle.  They gain resistance to non-magical weapon damage while in this state.  In addition, they add an additional +2 damage to their melee weapon attacks.  This lasts for 1 minute or if the bearfolk ends the rage early.

Powerful Build.  The bearfolk count as one size larger when determining their carrying capacity and the weight that they can push, drag, or lift.

Reckless Attack.  The bearfolk can lunge into battle, in hopes of a more direct hit.  It may grant itself advantage on its attacks for this round.  However, all attacks against it have advantage until the start of its next turn.

Multiattack.  The bearfolk may attack with claws and either bite or battle axe during its turn.

The elites among their kind, far larger and more capable of dealing more damage to their foes.

There are those who channel incredible energies through themselves, acting as conduits to the otherworld.  They can even conjure phantasmal claw attacks that launch at foes.  These bearfolk are priests, diviners and witch doctors among their people.

The chupacabra is a savage hunter, preying on livestock and draining them much like a vampire.  For some reason, drinking blood is its means of feasting, but it’s not an undead creature.  Some researchers have a hunch that it’s a distant relative, perhaps the result of demonic tampering.

Invigorating Drain.  The chupacabra feels empowered after feasting on blood.  If the target of a bite attack fails its Constitution saving throw, the chupacabra drains its blood and gains the following boons until the end of its next turn:

Shadowy Stealth.  While hiding behind naturally obscuring terrain or in dark areas, the chupacabra gains advantage on Stealth checks.

Multiattack.  The chupacabra may attack with one bite and one claw attack during its turn.  Alternatively, it may make two claw attacks on its turn instead. Those who dare to cannibalize their own are often stricken with a truly horrid curse.  These maddened souls become a creature of pure wickedness called the Wendigo.  These dark spirits haunt inhospitable regions, devouring and corrupting all they can find in their path.  Some find themselves in the dreaming itself, unleashing their tainted curse upon the nightmares of countless victims.  Among more northern-based indigenous communities, the tale of the wendigo is enough to strike a terrible chill down one’s spine.

Cursed Abomination.  The Wendigo must choose another humanoid species, it was this creature before becoming cursed.  This ability related to Consume Flesh as well as other potential opportunities.  Furthermore, the wendigo counts as both a fey and an undead creature.

Languages understands any it knew in life.

Acute Hunter.  The Wendigo can mimic voices of creatures it has heard in the last 24 hours, able to produce sounds and even speech patterns.  It can throw its voice up to 60ft. away from it.  In addition, checks utilizing smell and hearing (such as with Perception) are made with advantage.

Consume Flesh.  When the Wendigo kills a creature or encounters a corpse, it may also consume part of its flesh as well.  While adjacent to a corpse, the wendigo may use a bonus action or an action and regain 11 (2d10) hit points or 16 (3d10) hit points if the wendigo was the same species as the creature it’s currently eating.

Magical Resistance.  The Wendigo has advantage on all saving throws against spells and magical effects.

Mask of the Wild. The Wendigo can attempt hiding, even when it’s lightly obscured by various natural phenomena such as foliage or weather patterns.

Wendigo Fever.  Any creature that is struck by one of the wendigo’s unarmed attacks (bite or claw) must make a (DC 20) Constitution saving throw at the start of their next turn.  Upon failure, the victim gains the effects of the poisoned condition (this does not count as being “poisoned”), as well as gains a level of exhaustion next time they take a long rest.  While infected, they receive no benefits of a long rest.  The victim continues to accumulate exhaustion until it dies from it (or from another cause).  However, the victim may make a (DC 10) Nature check to realize that cannibalizing a creature of the same species as it will stave off the fever.  Upon feasting, the creature falls unconscious and slowly mutates into a Wendigo (or Lesser Wendigo) NPC under the DM’s control.  The victim cannot be awakened during this process.  If the victim dies before becoming a wendigo, it instead becomes a Ghoul.  In order to remove this illness, the wendigo that infected them must be killed.  Afterwards, they must receive a Greater Restoration spell or higher level of magic in order to get rid of it the rest of the way.

Multiattack.  The Wendigo may attack with its Gore/Bite, Claw and Slam attacks 3 times per round.

Wicked Roar (Recharge 4 – 6).  All creatures within 60ft. of the Wendigo must make a (DC 20) Wisdom saving throw.  Any creature that succeeds on the initial save is unaffected by this ability.  Any creature that fails is frightened and their speed is reduced to 0 for up to 1 minute.  However, the victim may attempt a new save at the end of their turn.  If the creature succeeds on their following save, they remain frightened for the duration, have their speed brought back to full and must use their movement leave the Wendigo’s 60ft. area of influence.  If the target succeeds the initial saving throw, the duration has ended or the effect is cured; they are no longer affected and are immune to this ability for 24 hours.

Natural Attack.  The Wendigo may make a Gore/Bite, Claws or Slam attack.

Pounce (2 Actions).  The Wendigo jumps 60ft. towards a target it can attack, making 1 melee attack.  The Wendigo cannot receive attacks of opportunity for doing this.

Vanish into the Wind.  The Wendigo turns invisible until the end of its next turn or until it uses an attack action, as long as it’s slightly concealed by natural phenomena.  It may also move 30ft.