“I saw the damnedest thing!  The mad bandit we hung from town square, whose had a thing for killing anyone who strays too far from town, he’s back!  In not just one day, the bastard is back to murdering townsfolk!  What sort of sick and unholy sorcery is this?  And worse, his horrid smile.  The Hell Beast gave the sickest grin possible after staring me dead in the face.  I’ve truly failed my job as a deputy, the sheriff is equally shaken too.  We’re all trapped here as we watches and mocks us!  We’ll all be claimed by him eventually!” – Clement O. Weir, Human Fighter/Ranger, Deputy of Wispy Cliffs

This creature hails from a realm rife with sylvan magic.  However, as many tales will tell you, there are many dark mysterious among the fae.  One such creature is the “Cheerful Stalker” as many children’s tales have dubbed it. The creature almost always dresses in fine garb, typically high fashion.  Everything it does, it will do in the name of finding, torturing and murdering its designated subject.  A lot of the time, the creature will blend in and act completely average to obtain its goals; whether through acts of diplomacy, favors or more.  Those who want to discover the monster’s motive will often have to pry and it’s likely the Stalker will catch onto their act.  Sometimes, they might even go out of their way to kill those investigating them too, as it’s an obstacle for their goals.

They’re a wandering traveler with an insatiable appetite for murder, particularly of a target it harasses and torments first.  This ritualistic killer almost always follows similar patterns as it tracks down and breaks down its prey.  Those who have tried to destroy it have found the creature finding them again a day later!  And what’s worse, it might actually be one of many.  While inherently neutral in gender and appearance, it is capable of taking on the guises of a variety of men and women.

Designate Prey.  After studying its desired target for around 1 hour, the Cheerful Stalker will relentlessly pursue that target until it is slain or overpowers it.  It will only attack anything in its way if they attempt to prevent it from its goal.  It has advantage on all checks to track and seek out its prey.  It can also speak and understand one language that its prey knows as long for as long as it pursues that target.  Should its target overpower it, the Stalker will flea, proving that it is a coward.

Innate Magic.  The Cheerful Stalker has innate fey magics.  Its casting stat is Charisma (+7 to hit, DC 15) and knows the following spells:

Maddening Grin.  While the Stalker’s disguise is dispelled or done away with, any creature that steps too close to the Stalker sees its twisted and impossible rictus grin.   When a creature enters within a 20ft. range of the stalker, it must make a (DC 15) Wisdom saving throw.  If they fail, they take an extra 7 (2d6) psychic damage and are frightened for up to 1 minute.  However, at the start of their turn, they may make a new save.  Any creature that succeeds the save is immune to the effect for 24 hours.  This is a fear effect.

Vengeful Stalker.  When the Stalker is reduced to 0 HP, its corporeal form returns to whatever domain of the a faerie of your choosing (even places like the Shadow Rift, in the case of Ravenloft).  It will materialize up to 100 feet away from where it was last killed after 1 day.  However, if a designated victim of the stalker makes Intimidation check to threaten the spirit of the Stalker within 1 day of defeating it, it remains “dead” out of cowardly panic.

Multiattack.  The Cheerful Stalker may make up to two attacks per round.

Corrupted Blade.  Melee Weapon Attack:  +5 to hit, reach 5 ft., one creature.  Hit: 6 (1d8+2) slashing damage plus 4 (1d8) poison damage.  The hit creature must make a (DC 15) Constitution saving throw.  Upon failing, the creature takes an extra 5 (1d8) poison damage and becomes poisoned for until the end of their next turn. Plump and grotesque, these creatures are walking and bloated bombs filled with sickly puss, bile and a strange supernatural acid.  Besides unleashing blasts of its projectile vomit, it’s capable of cleaving foes with its unwieldy blades.  These hell creatures seek to carve and corrode the world around them.

Multiattack.  The Oozer may attack with Giant Cleavers twice per round.

Vomit Shot.  Ranged Weapon Attack: +4 to hit, range 60ft., one creature.  Hit: 19 (4d8 + 1) acid damage.  The target must also make a (DC 16) Constitution saving throw or have their speed reduced by half until the start of their next turn.

Death Throes.  Upon being reduced to 0 hit points, the oozer uses its reaction to explode.  All creatures within 10ft. of it must make a (DC 16) Dexterity saving throw.  Upon failure, they take 13 (2d12) vs. acid damage.

Disclaimer: Like all creatures with a death throes ability, don’t abuse it!  Your players will get tired of it.

The damned souls of particularly cruel folk who exploited the law to destroy their enemies and anyone else who dared to disagree with them.  In the afterlife, they have become a ghastly mockery of their grisly actions.  These hanging judges may have received their just deserts in life, but in death they only cause more pain and suffering at the hands of their own “law”, which they enforce throughout the whole region.  And even worse, some might lead a posse of like-minded individuals who have an equally deranged take on the law.

Akimbo Style.  When the Hangin’ Judge has attacked with its bayonet scythe and revolver in the same hand during the same round, it may use a bonus action to use its off-hand to attack with either weapon.  Its modifiers are applied to the respective attack and damage.  Furthermore, while wielding both weapons, the hangin’ judge increases its AC by 2.

Arcane Firearm.  The Hangin’ Judge automatically reloads its revolvers when bullets run out.  Furthermore, the Judge’s attacks count as magical.

Call to Action.  The Hangin’ Judge can call for aid from other hangin’ judges.  They usually show up within a night.  The allied creature can be from an indeterminate distance, as long as they exist on the same plane.

Magic Resistance.  The Hangin’ Judge has advantage on saving throw against magical effects and spells.

Multiattack.  The Hangin’ Judge may attack three times per round.

Death Revolver.  Ranged Weapon Attack: +6 to hit, range 60ft./180ft., one creature.  Hit: 12 (2d8 + 3) necrotic damage.  The target must also make a (DC 16) Constitution saving throw or have their speed reduced by half until the start of their next turn.

The ‘Glom, short for conglomerate, is a mixture of undead corpses fused through unholy magic.  It sloshes and slinks across the land, looking for more bodies to consume to make it stronger.  It’s a single-minded killer obsessed with strength at the cost of any living or dead creature it might find.  Its disgusting features have a habit of inducing terror in all that gaze upon it.

Aura of Fear.  Any creature that enters or starts its turn within 60ft. of the ‘glom must make a (DC 14) Wisdom saving throw.  Upon failure, they are frightened to upwards to 1 hour.  At the end of its turn, it may attempt a new save.  If the target ends its fear effect, it is immune to it for up to 24 hours.

False Appearance.  While motionless, the ‘glom looks like indistinguishable from an ordinary pile of corpses.

Multiple Limbs.  The ‘glom possesses parts from various bodies, effecting it in different ways.  Depending on what excess limbs it has, depends on what boons it has.  Choose one of the following (in the case of gaining more features, each one can’t be obtained more than once):

Undead Fortitude.  Like the Zombie, the ‘Glom is incredibly resilient, maybe more so.  If damage reduces the ‘glom to 0 hit points, it must make a Constitution saving throw with a DC of 5+the damage taken, unless the damage is radiant or from a critical hit. On a success, the ‘glom drops to 1 hit point instead.

Multiattack.  The ‘Glom may attack up to 3 times per round.

Consume Corpse.  The ‘Glom may devour a body that is dead or dying.  By doing so, it regains 11 (2d10) hit points, as it mends and replaces damaged parts.  In addition, it gains another feature from Multiple Limbs until it gains all four. 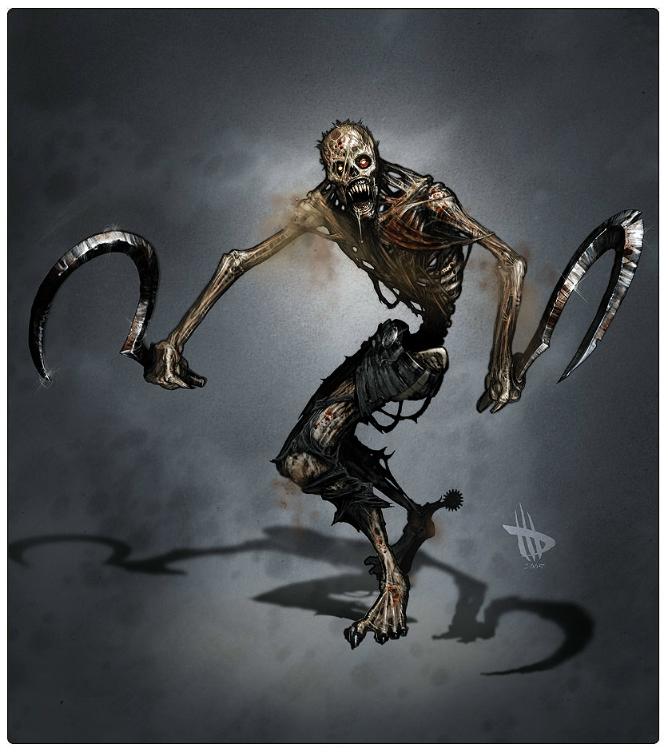 Give the skeleton the following:

3 thoughts on “Weird Western Monsters – Part 4 (The Brood, The Damned and the Undead)”