What a wild night I had.  I got kicked outta Wicker Valley by a bunch of complainers, stumbled drunk in the desert, was chased by giant wolves and met the most beautiful wandering honey!  She took me to some big tent or whatever, gave me the best boozy juice I’ve ever had.  When I came to in the morning, I was face down right outside of this town.  Lucky break, huh?  Granted, my ears and nose look a bit weird and I look a bit mangy.  Must have been out of my mind for weeks, but my luck got me to survive!  Anywho, you want some info on the weird critters I stumbled upon?  I got a whole notebook’s worth! – Rowan T. Jammerson, Cursed-Human Maverick Rogue

All sorts of incredible things lie in the reaches beyond the boom towns, outposts and whatnot. Some might be potential allies, while most will kill you for survival’s sake. And, the farther from main parts of civilization you go, the lower your likelihood for survival is.  The wilds sports a wide variety of strange flora and fauna alike, some with minds all their own.

Author’s Note: Originally, this was supposed to be a conversion of Spellslinger. That fell through. So, that’s pretty much it for my take on Spellslinger related content, unless there are requests for more NPCs based on the Brands and the like. By the way, keep an eye out for more weird western creatures, as well as a few conversions from other games.

A horrific mix of a crocodile and a leech, this horror lurks in shallow waters for any sap foolish enough to swim near its territory. Worse yet, they’ve been known to corrupt bodies of water they live in, after a period of time. Entire populations of fish have been known to die in regions where the bunyip dwells.

Amphibious. The bunyip may breathe on both land and in water.

Blood-lust Rage. When the bunyip smells a creature within 60 ft. of it while in water or takes damage for the first time in a round, it enters a rage. It gains resistance to all non-magical physical damage and adds an additional +2 damage to each of its attacks. This lasts until the end of its next round.

Perilous Poison. A creature hit by the bunyip’s attacks must make a (DC 13) Constitution saving throw at the beginning of their turn. Upon failure, they take an additional 5 (2d4) poison damage and gain the poisoned condition for up to 1 minute, or until they succeed their saving throw.

Multiattack. The bunyip may attack three times per round, only one attack may be bite.

This version of the creature can pollute pools of water. It gains the following:

The Terror from the Mines, as it’s also known as. This creature has a small mouth surrounded by a series of tentacles. Its head juts out of a slithering snake-like body. Despite their hideous form, they have shown to persist in areas far beyond a desert.

Blood Drain. Whenever a gold crawler hits with its Grasping Mouth attack, it may use a bonus action to drain its victim. The victim takes an additional 22 (4d8 + 4) piercing damage. In addition, the target must make a (DC 14) Constitution saving throw or have their maximum HP reduced by the amount of extra damage taken from Blood Drain.

Innate Magic. The gold crawler has control over innate supernatural abilities, using its Wisdom modifier as a casting stat. (DC 11, spell attack +3). The Gold Crawler doesn’t require any material components for these abilities.

Magical Weapons. Attacks made by the gold crawler are considered magical in nature.

Tentacles. Melee Weapon Attack: +7 to hit, reach 10 ft., one creature. Hit: 7 (1d8 + 4) piercing damage and the target is grappled. The target must take the escape action (DC 15) to break free from the grapple.

Wolf-like monstrosities, warriors of nature, ancient tribal folk who survive against all odds. I dunno what to call them, really! Many are willing to deal with us outside folk, while others aren’t so kind. But, plenty of them Dog Heads seem like honest folk like us. Sure, lots are on the hunt for some “enemy of nature” they call a Worm or something. It’s weird, don’t ask. Also, don’t let the wild posture, shaggy hair and beast face fool ya; they’re damn smart… landed this gash scar on my face from a sneak attack!  Beware the Gray Runner tribe in particular, pretty nasty! – Berk Glerdsand, Halfling Marshal Sheriff of Dune Burrow.

The Lupine are an ancient people, perhaps as old as the other humanoids that inhabit the region. Unlike the others, they were born from powerful magic, while others emigrated or formed a tribe of their own in the land. Details aren’t well known. Most say there were beasts that were uplifted by powerful spirit beings in search of a new kind of devotee. The Lupines, in their words, simply are and that’s all they’ll discuss on the matter.  Some myths, such as those of the Gray Runners, suggest that they were an existing species that was brought here… making them inherently non-native too.  Despite being brutal hunters with ruthless tacticians among their ranks, they are more than capable of getting along with others. However, their rough demeanor and stubborn tendencies make them not overly sociable.

Multiattack. The Lupine may attack twice per round. 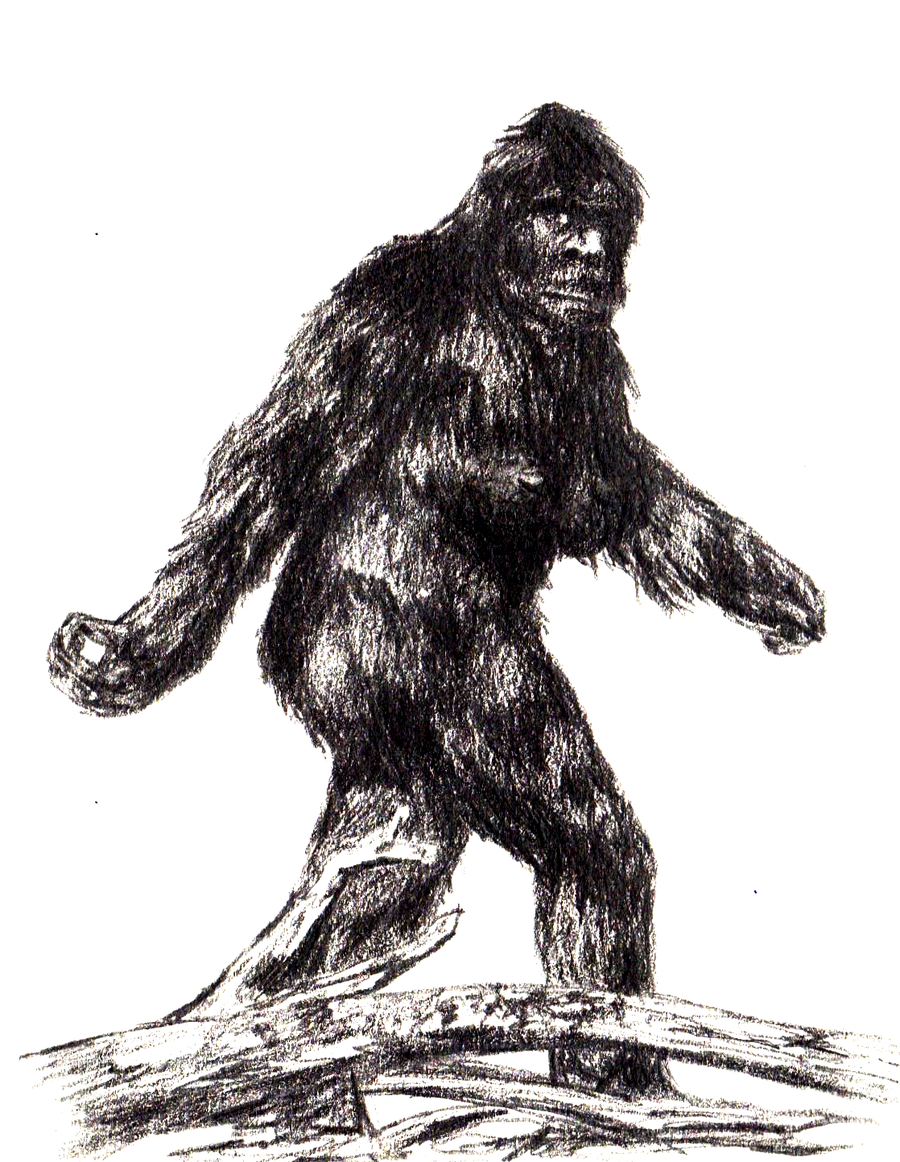 Bigfoot. This creature is a master hunter, while hard to find. While using Survival to track, the Sasquatch has advantage. However, attempts to track the Sasquatch by other creatures have disadvantage.

Blend into Nature. While in forested, mountainous, hilly or related terrain, the Sasquatch always has advantage on Stealth checks. Furthermore, if the check is successful, the Sasquatch is considerged invisible for upwards to 1 minute.

Spine Chilling Roar (Recharge 4 – 6). Any creature within a 15 ft. radius must make a (DC 14) Constitution saving throw, as the sasquatch belts out a powerful shout. Any creature who fails is deafened and stunned for up to 1 minute and takes 10 (3d6) thunder damage. Creatures who succeed are deafened for 1 round instead.

Originally hailing from the deepest of the rain forests, well south of the cacti ridden desert lands, lies a group of fell spirit beings conjured by a tribe long ago. What happened to said tribe is unknown, but the dread beings quickly took control of the area. Eons passed as they grew tired of the land they conquered, seeking to learn about more civilizations to crush under their horrid tyranny. These snake-headed beings love deception and corruption of the law, doing whatever they can to find their way into all bureaucratic matters should they not feel like conquering a land by force. And worse yet, they can disguise their forms and blend in too. Whether from a Stygian cult or a spawn of Yig, the serpentmen are not to be trifled with.

Charming Presence. Any creature that spends more than 1 hour at a time with this creature risks becoming charmed by it. After 1 hour, the creature must make a (DC 13) Charisma saving throw. Upon failure, they consider the serpentman and its allies to be their own allies. Upon success, they don’t need to save again until they are within the serpentman’s sphere of influence for another hour.

Dislodge Jaw. When attempting to swallow an enemy, it may use a bonus action to stretch its jaw (and even body) slightly. Upon doing so, it may consume a medium sized creature instead of small or smaller.

Psionic Resistance. Exposed to unspeakable horror, the serpentmen are more adept at dealing with related forces. They have advantage on all saving throws and checks related to charm effects, enchantments and illusions. This includes all manner of non-magical tricks, such as Insight checks against an opponent’s Deception roll. Furthermore, the serpentman has advantage on all other saving throws against magical effects and spells.

Snake Bite. Melee Weapon Attack: +5 to hit, reach 10 ft., one creature. Hit: 6 (1d6 + 3) piercing damage plus 10 (3d6) poison damage. The target of the attack must also make a (DC 12) or become poisoned until the end of their next turn. The serpentman may forgo damage to try to swallow a Small or smaller creature instead.

Disguise Self. The serpentman can disguise itself as any humanoid creature it has seen in the last 48 hours. The serpentman can choose to sculpt and alter the shape to look like a different being, as long as they have a precise vision in mind. To see through the disguise, the target must make an Insight check against a Serpentman’s Deception check. The duration of this disguise is otherwise unlimited. Also, using the bite attack destroys the disguise, until used again.

Snake Spirit Blur. When targeted by a weapon attack within 30 ft., the serpentman can use its reaction to trick the opponent with mind games. The attacker must make a (DC 13) Wisdom saving throw. If the attacker fails, they’ll register the serpentman as a blur and receive disadvantage to attack them. This effect persists until another creature is targeted by the blur by the same serpentman. Otherwise, this effect lasts up to 1 minute or until the serpentman who marked their target dies.

Terrifying steeds with elongated snouts and vicious jaws. Able to sniff the air (much like the wolf-like creatures that tamed them), they’re experts at tacking prey. Plus, their toothy maws allow them to latch onto whatever gets too close, keeping it from getting away. These wild and shaggy beasts are a challenge to maintain and train, but the wild folk such as Gray Runner tribesfolk and various gutsier tribes have been long since up to the task, viewing horses as inferior.

These share the stats of the Warhorse with the following changes:

Werewolf the Apocalypse is owned by White Wolf Games.  Spellslinger is owned by Fantasy Flight Games.  Deadlands: The Weird West is owned by Pinnacle Entertainment.  Created by Doctor Necrotic, for Doctor Necrotic Media.  All rights and copyrights belong to respective owners.