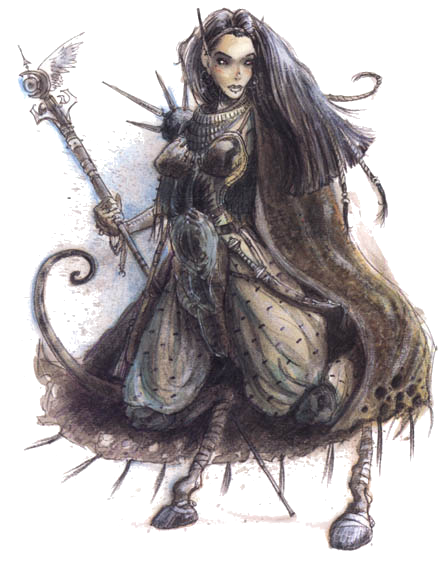 “I’ve never had someone make a portrait of me, so I guess we’re even on that favor…” – Rhys, Factol of the Transcendent Order, to Kylie the Tout

The Planetouched, truly incredible beings.  Such people can trace their ancestry to a powerful planar phenomena.  Perhaps they were literally born from an ancient union of mortal and creature.  Perhaps they are the result of arcane dabbling with such powers.  Maybe they’re the consequence of a warlock’s pact!  No matter the cause, the planetouched are usually the result.  Outside of hubs like Sigil, the City of Doors, such beings are extremely rare.  Some can be found in more accommodating locales like Mulhorand on Abeir-Toril or The Rock of Bral in Wildspace.  Either way, it’s likely that the average person will either never encounter such people or never know that they have.

Despite contrary claims, it is quite challenging to pin the plane-touched to a unified species or entity.  While some are indeed more unified than others, this is not the case as a whole.  You may see a Tiefling with horns and a tail; another with large monstrous clawed feet, a serpentine tongue and scales traveling parts of their body.  Likewise, you might see the most gorgeous Aasimar in existence, while another one is uncanny and horribly alien.

No matter whatever the case may be, I’m so glad you chose me as your Tout…  That’s cager for (usually paid) source of information, a guide of sorts!  So, plant your hind in a decent enough seat, now’s your time to learn a thing!  (It might save your head later!)  Also, please focus on me.  My little friend Dib will behave himself, I promise you… as long as you cork your bone-box and open an ear.

Author’s Note: This was one I’ve always wanted to do.  While not much of a “challenge” for me to tackle compared to other stuff, it mostly came down to filling gaps I noticed in 5E.  A lot of awesome planar flavor was missing and I wanted to remedy that the best I could.  So, here’s some extra options for planar races and then some!  Many tend to stick to a formula of sorts, but that’s what you get from sampling from similar races from various similar sources such as the Planescape setting, various Dragon articles and Pathfinder.  Sure, it’s not as open as the original charts, but this is a compromise of old and new.  Also, with the amount of attention touts such as Kylie have gotten recently through podcasts like Commander Holly’s “Trapped in the Birdcage”, I had to borrow her for an article! Enjoy.

No doubt you’ve heard of the Asmodean types, yeah?  Lemme tell you some hard truth, those ain’t Sigil natives!  Nah, they come from another dimension entirely.  Literally aliens!  They were a bunch of barmies who thought giving up their humanity for their version of Asmodeus was a good idea.  Their minds musta been stewed to boiling point…  No matter, their empire of Bael Turath fell eons ago, so they tend to wander.  They’ve hopped away from some realm called Nerath and have found themselves even here.  Lots get preachy about their patron deity.  They’re pretty far from subtle too, you can point ’em out with relative ease!  At least the Tieflings tend to be a little more subtle, or have some variation.  The Asmodean folk?  They’re truly a unified race.  That’s as far as I know.  My expertise lies within the cage, berk!  Also, I ain’t biased against ’em, YOU ARE!  *humph*

Now we’re getting into the meat and potatoes of what I wanted to talk about!  That’s right, the Tieflings!  Folks like us, we’re born a little different.  I mean born from foul blood, something deep in the lowest planes.  And because of it, Tieflings tend not to luck out as much as their other plane touched cousins, but remain hardy and powerful.  Some benefit more from their fell boons than others.  Some prove to be valid allies, if their signs of underworld blight don’t turn one away.

In prior editions, yugoloths and gehreleths gained their own languages.  In this instance, it’s available as an exotic language.  Certain sub-races gain that option instead of abyssal or infernal, at the DM’s discretion.

2 thoughts on “A Tout’s Look at the Extraplanar (Part 1): Tieflings Expanded”