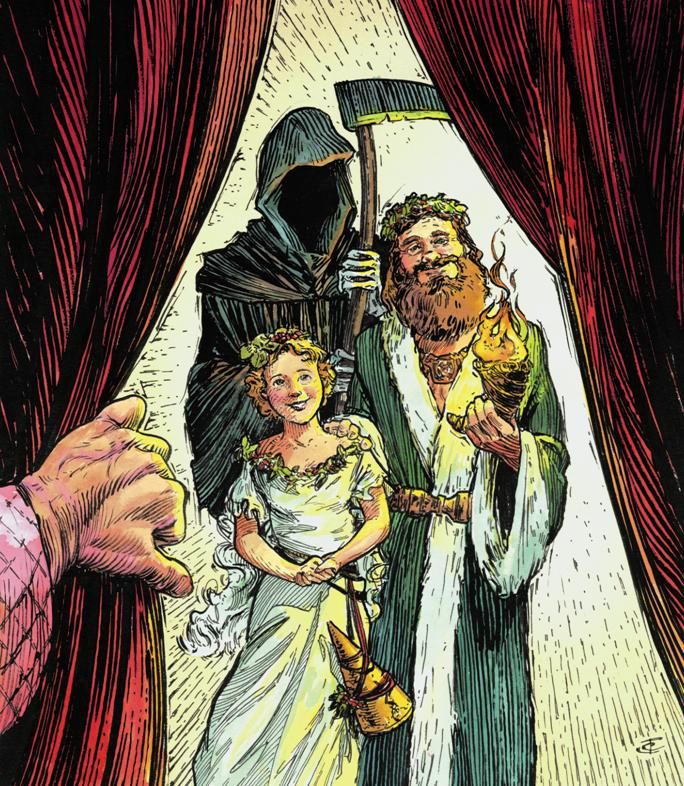 It is not certain if these spirits are of the deceased or the emotion of yuletide joy that persists after one is lost.  Perhaps they’re not even ghosts at all, but a powerful embodiment of the season itself!   Perhaps they’re divided courts of the fey, likely a Winter Court.  It is quite likely that they’re spiritual manifestations of Celestials and Fiends, who take a different role in good and evil.  No matter their origin, these beings are dedicated to their cause of taking part in a yuletide celebration.  All of these spirits are decorated with assorted garb.  Crowns of wreaths, fanciful ball costumes, monk robes, simple cloth, peasantry garments, regal/noble outfits, etc.  It’s rare that any two spirits at all resemble each other.  In fact, they often go out of the way to look different from each other.

Their other reason for appearing, beyond overseeing festivities, is to visit those in dire need.  In the case of good spirits, they lead the subject on the right path through showing them the error of their ways.  In other cases, they give rewards to the just and noble.  In the case of bad spirits, they torment souls who have dared to stray away from the spirit of the season, rendering them horrified or mad.  Or even worse, they might even further a victim’s descent into damnation.  No matter the case, they materialize during season festivities and carry a certain power allowing them to perform incredible feats.

All are tied to a point in time, capable of incredible feats of divination and conjuration.  Memories of the past, mirrors of the present and visions of the future.  When such abilities prove to be not enough, they are even capable of gathering more spirits to aid them.

Author’s Note:  Faith from Brynvalk is hosting RPG Blog Carnival and I’m more than happy to contribute again!  Last year, it was all about the faerie folk.  This year?  Literature.  So, with a dash of “novel inspiration”, I’m focusing on Gothic literature (and some related genres and authors, like more Lovecraft!)  For starters, I’m going to do something in the name of the yuletide season and make a semi-modular creature based on Charles Dickens’ “A Christmas Carol”.  I might do one more entry to fit the general season, who knows?  (That said, I’m busy with work being a real pain, so it’s hard to say.  Hopefully, I won’t delay too much.  We’ll see!!)

Spirit of the Festive Season

Festive Emissary.  Being the embodiment of an ideal, the spirit cannot be charmed or changed via polymorphed.  Also, it can dimension jump, a la Plane Shift.  However, it must go to a location relevant to its cause.

Movement.  as per ghost

Magical Weapons.  Attacks done by the spirit count as magical.

Spacial Jump. As a movement, the spirit can teleport to any place it sees within 30 feet.

Multiattack.  The spirit can attack twice per round.

Conjure Festive Souls.  The spirit may summon up to three festive souls, embodying a number of emotions, passions and even sins.  These souls are non-combative and usually exist for imparting a moral lesson.

Spirit Projection.  The spirit can touch one willing creature.  For up to two hours, that creature has a projected form while their body lies unconscious.  The form can be taken with the spirit, also having incorporeal abilities while the effect is active.  Should the effect end early or the creature’s projected form is away from the body when it ends, they will automatically jump back to their body.

Visions of Yuletide.  The spirit is capable of crafting a vision of the season, from the past the present or the future.  The spirit is only capable of one of these and cannot change once it is chosen.  As an action, the spirit may grant one target within touch range a vision.  These visions seems completely real, encapsulating a moment of time from memory, a current event or a prediction.  The subject of the vision may make a saving throw or check if they wish to acknowledge this effect as an illusion.  While a creature is in a projected state, the spirit may use this ability as a bonus action.

One thought on “Spirit of the Festive Season – The Ghosts of Christmas Past, Present and Future”