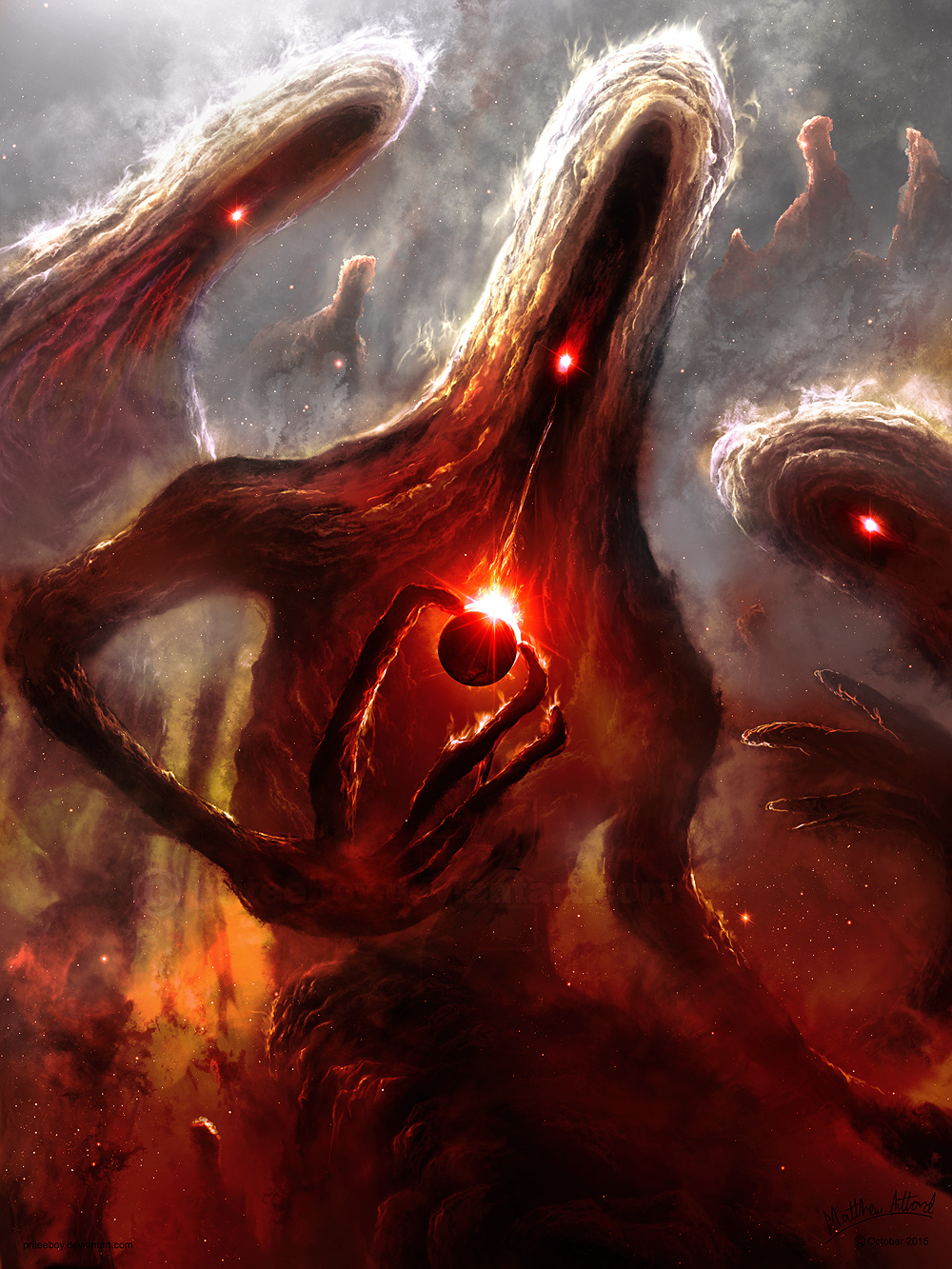 I made a slight addition to my supply of Lovecraft inspired monsters, after there was request for more!  Plus, I ran out of time on the other post and wanted to squeeze one more nasty thing in there.  Here is the Gug, the Elder Thing and the Ghoul.  Please enjoy, don’t go insane though… like the last group.

END_OF_DOCUMENT_TOKEN_TO_BE_REPLACED Welcome back, my cultists.  Back for more horrors from beyond the void and beyond reason?  I’m more than happy to provide.  Here are some classic creatures, as seen in the stories of H.P. Lovecraft.  Be sure to check out my other post about Lovecraft inspired monsters from last week.  They’re updated versions of earlier posts on my blog.  While they needed a new coat of paint, I’ve been eager to bring them up to date.  And, if this proves popular, I might continue to bring Lovecraftian monsters into D&D 5th Edition…  Hell, I might compile them for DM’s Guild or the like.

As for using the content in other worlds, the easiest solution is The Far Realm, a weird demiplane just outside of reality that has been messing with the multiverse since late 2E!  Barring that, there’s always the classic method of weird and aberrant things in dungeons and the underground depths (like the Underdark). And with that, here is my take on The Deep One, the Nightgaunt, the Mi-Go and the Shoggoth.

END_OF_DOCUMENT_TOKEN_TO_BE_REPLACED

There exists dimensions beyond our own.  And what dwells in those realms?  Entities far beyond our comprehension, of course!  Only a fool would research too deeply into such theories, as they’re liable to go mad from either dark truths or being constantly called a liar and a fool.

Author’s Note: It’s been a while since I’ve done something truly inspired by H.P. Lovecraft’s brand of horror.  While my personal campaign has inject Lovecraftiana into a Barrier Peaks homage (making it more Firestorm Peak), my blog has been lacking in that.  So, let’s revisit Cosmic Horror by revisiting some of my older monsters!  Enjoy.

END_OF_DOCUMENT_TOKEN_TO_BE_REPLACED

We were once cowards, existing within a small bubble… Then, they came and lit they way.  With the help of portal devices and the temporal displacement fields, we did the rest. – Unnamed Fraal Engineer.

Several months ago, The King Orvaldt, the kingdom’s eponymous leader and House Patriarch, sent a group of adventurers to uncover the strange happenings in the mountainside.  Not only has trade and mining been disrupted, strange poisons had messed with the soil and water supply of local villagers.  As the adventurers ascended, they uncovered wreckage from some sort of advanced faring vessel, akin to a Spelljammer.  Encountering several constructs and mutated horrors, they were lead through a cave into some strange temple-like building.  Only, little did they know it was actually a part of a larger spaceship.  The team struggled as they made their way through winding corridors and abandoned halls still rife with devices that were literally alien in nature, as well as even stranger creatures that lurked the derelict wreckage.

By some miracle, the power source had enough juice to boot the battered ship back up.  Doing this alerted the remaining denizens, who were cornered in a secret room.  Slowly but surely, the team pieced together that experiments with portal technology lead to hostile coup by another species called “The Reptoids”, a race of scaled shapeshifting aliens.  The fight caused the technology to go haywire, slamming it into the depths of a mountain.  Much of the ship was crushed, even more totally destroyed.  Attempts at freedom were failures, as the Reptoids saw their chance to hijack the remaining operations on the ship.  Eventually, they were confronted by the team, who managed to defeat them in impossible odds.  The Fraal had emerged from their hiding and did all they could to rebuild elsewhere, after solving the very mess they caused initially.

Following the Fraal’s retreat from the mountains into the forest below, things have remained silent under an opaque energy dome for countless months, some say at least 5.  Occasional trade was made with The Kingdom of Orvald, greatly bolstering its defenses with both the mystic arts and strange innovations.  Some stuck around a while to help royal crafters learn the art of artifice, only to return once lessons were complete.  In addition, many of the Fraal could commune with important figures within the kingdom to discuss matters.  Sometimes, said figures would speak at some mid-point created by the Fraal, which was none the less a technical marvel. Some chose to join them in their hidden communes.  Others followed the beastmen and other mutants that lived in territory close by, who proclaimed a faith in the Fraal themselves.

AUTHOR’S NOTE:  Depending on the outcome of my mini-dungeon, the landscape of your world might be drastically changed forever!  Aberrant plants and animals, Reptoids, Greys and more!  That doesn’t even account for the strange technologies that fill the crashed spaceship.  Like Blackmoor, this is a world that is being changed by an encounter with a technologically advanced race.  Granted, the alien visitors have also learned from the magical mysticism of the world they’ve inhabited.  More or less, this is an adventure location with plot seeds and ideas to sample from.  I might combine this with the module to create a product if reception proves positive.  While not typical for this blog, I wanted to try my hand at expanding my own little universe.  Sure, I’ve been reluctant to share it (in light of recent events),   Needless to say, my campaign isn’t even done, so this post might be entirely moot in regards to my own group.  None the less, here’s my take on an expanded world.