The end of the world happened as we expected, too many people squabbling over too many things.  And with their super weapons, a new breed of terror was unleashed.  Not only did the radiation spread, it became aware, it gained its own life.  And what followed?  I dare not say…  All that is certain is the horrors of this war spawned all of them.  Protect yourself at all costs, should you run into such a mockery of life.

The post-apocalypse, a staple of darker science fiction.  There are few greater fears than not only one’s own death, but the death of the world we live in.  Or at the very least, the death of civilization.  In most cases, we wouldn’t have roaming raiders, so much as starved out and depressed barbarians.  But, since science fiction gives some leeway, we’re able to explore the grittier side with the likes of Cormac McCarthy’s The Road to the more gonzo like Mad Max and all of the bootlegs and homages that it inspired!  (And ’70s/’80s Italian post-apocalyptic bootlegs are simply incredible.)  Or go even further with the likes of Adventure Time, especially in the more recent years as the old world was further expanded upon.  Even if settlements are rebuilding the old world and some semblance of stability comes to the wastes, there are still many hazards that roam the blasted out reaches.  Just like the dungeon crawls and treks of D&D fantasy, the world has regressed into an age of buried secrets, monstrous threats, lost knowledge and high adventure!

With that, today I’m going to focus on retooling some old ideas I’ve had for post-apocalyptic settings.  Effects of radiation, as well as enfeebled equipment and ruins of buildings are given some spit and polish.  Plus, I wanted to bring back a fair share of gruesome and ghoulish creatures I had worked on in the past.  Whether it’s an elemental power of radiation itself or the many mutants that is probably created, there are tons of familiar faces.  While I wanted to make a scrapping based craft mechanic, I couldn’t really settle on a base craft mechanic.  To be fair, neither has core D&D really.  And until we have an expanded idea, there are tons of concepts floating throughout the web.  So, I’ll likely come back to that in the future.

Author’s Note: Here’s something I’ve been wanting to do for a while!  In fact, it’s part 1 for that matter.  Expect a heaping helping of horrifying mutants within the next couple of days to next week!  Stay glowing, my radioactive muties!

Sometimes reality breaks down a little in sights of impossible occurrences.  These events are called “anomalies”.  Normally, these forces are completely invisible and lie until activated.  However, people who are sensitive to the supernatural can detect its presence; either through a DC 13 Arcana check or a Detect Magic/Detect Evil and Good spell.  (For games that deal with more science fiction elements rather than fantasy elements, I’ll return to this post later and edit an option for those not using Arcana.) Without the aid of powerful artifacts or magic, anomalies can’t be destroyed.

NOTE: There is a strong chance that this WILL kill a character upon contact.  It’s recommended that you use anomalies sparingly.  In addition, the following are examples based on the STALKER video games.  Feel free to modify and alter as you see fit!

Should a creature step within 5ft. range of an anomaly, it triggers.  The DM rolls a d100, with a corresponding anomaly for that roll. 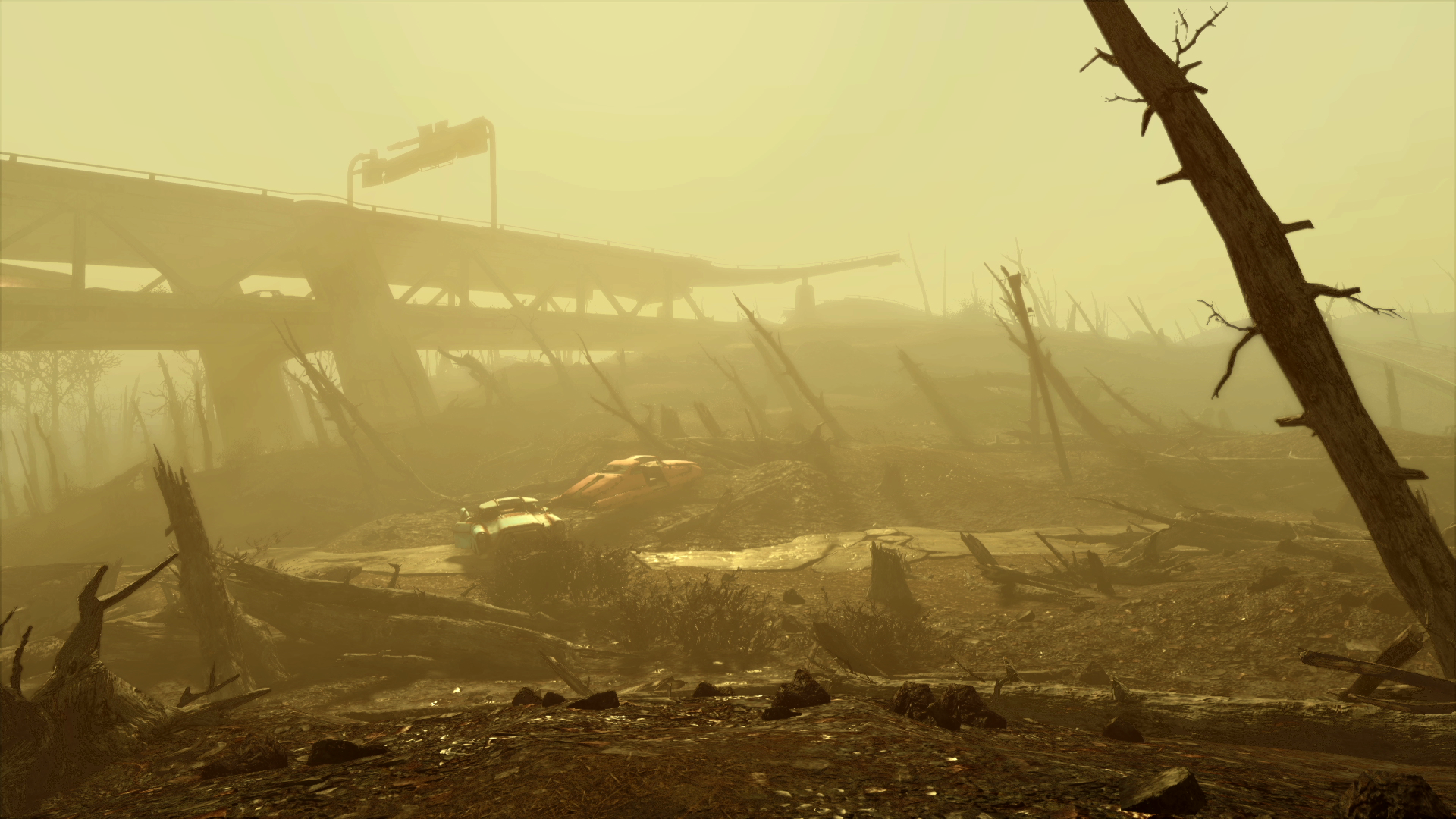 The Radiant Glow, a force of power.  At the same time?  It’s a force of unrelenting destruction!  Radiation delivers, it consumes, it builds, it destroys.

Radiation – An irradiated area is highly dangerous, should a character remain there long enough.  For every 10 minutes that a character stays in a radioactive zone, they must make a Constitution saving throw.  If the character fails now or during subsequent times, they gain the exhaustion next time they take a long rest or 8 hours during a moment of recuperation.  Creatures killed by radiation are likely to give off a radioactive signature, sometimes rise up as irradiated undead.

Radiation Damage – This new damage type is caused by irradiated creatures.  Similar to being exposed to a radioactive area, too much radiation damage at once can lead to radiation poisoning.  For the sake of weakness, resistance and immunity; it is a mixture of Necrotic and Radiant damage types.

Characters that are resistant to Radiation Damage also gain advantage on saving throws against radiation.  Likewise, immunity to the damage would bring immunity to radiation poisoning.

Campaign Option: Prolonged Environment Exposure – To add a more realistic approach, radiation might have a more latent effect on the victim.  Depending on how long also depends how severe of an infection could be.  This assumes the radiation is in a spread out area that on average stays at a level of radiation. 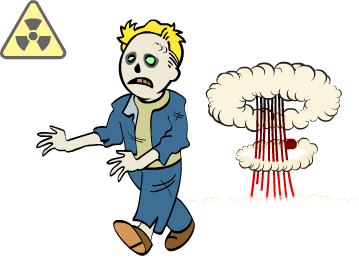 Campaign Option:  Fallout-Style Radiation – In this module, we assume you’re running a game closer to Fallout.  Either that or you aren’t a huge fan of the D20 Modern style radiation tables.  In this module, radiation checks are based on frequency to simulate how intense the radiation is.  Instead of rising levels of exhaustion for higher levels, the player simply rolls saves more often.  Failure results in 1 level of exhaustion.  When in combat, engaged against a radioactive creature; the character must also save based on the level the creature gives off.

Level of Radiation in Area – Save Frequency

*If you lack “zocchi” dice, roll a D4 instead and reroll any 4 you may get.

Campaign Option: Medical Treatment – Due to the harsh power of radiation, afflicted require intensive treatment.  Under normal circumstance, these infections will not go away with rest.  During a long rest, someone trained in Medicine or in a healing kit can attempt to help a victim recover from 1 level of exhaustion (DC 20).  However, Greater Restoration helps remove a level of radiation poisoning as well.  Failure results in treatment being ineffective for that period.  This cannot be tried again during the remainder of that rest.  Alternatively, alchemical or medical cures could be created, similar to healing potions and poisons.  A “RadAway” equivalent could be crafted to remove Exhaustion caused by Radiation.

Old world ruins continue to weaken and break down as time goes on and they continue to lie in abandonment.  As such, trekking through them tends to be extremely dangerous and can result in collapses.  However, should enough people actively work with supplies, they could either scrap a building or re-purpose it back to working order.

The exploring character must make a Survival check (DC 12) to successfully find a way into a decrepit building.  At the GM’s discretion, for every 250 – 1,000 feet that the player travels in a building (especially in a larger one) , roll another check.  If the check fails to meet the DC, part of the building faces damage.

Like structures, eventually equipment begins to break down as well.  As such, this equipment is considered “feeble”  Overtime, ancient equipment loses its luster, becoming far weaker and worn out.  Sometimes, it’s from exposure to bad environments.  Other times, it’s from strange monsters capable of destructive power.  In addition to weakened metals, arms and armory crafted from rock and bone are likely no where near as durable as stronger equivalents.

While wielding this weapon, targets that are wearing non-feeble armor (including natural armor or related bonuses) have resistance to its damage.  Targets that have non-feeble armor that have resistance to non-magical weapons are immune to attacks from this weapon.  Furthermore, rolling a Natural 1 on the die destroys this weapon.  In addition, armor with the feeble property grants -1 AC penalty upon any armor above leather.  If a target scores a natural 20 against your armor, it shatters.  However, if either the target or attacker is wielding a feeble weapon and the other has feeble armor, this quality is ignored.  However, the Nat 1/Nat 20 rule still applies.

Special Thanks to Ed Wilson, for inspiring a good chunk of this.  Also, special thanks for D20 Modern RPG and Dark Sun Campaign Setting by TSR Inc/Wizards of the Coast, which provided some initial ideas for this.  Also, a huge shout out to GSC Game World for creating one of my favorite franchises, S.T.A.L.K.E.R.!