To me, a dark setting is all the more in need of heroes.  And when they’re a point of light in a dark and uncaring universe, their actions matter that much more.  There’s a fascinating contrast of heroics in truly horrific settings.  The dashing monster hunter in a gothic realm where supernatural evil is pervasive.  Knowledge seekers preserving and sharing their discoveries in a world where most of them were wiped out in an apocalypse.  Outsiders called to action to thwart shadow-governments, megacorporations and other groups of corrupt authority.  Granted, such protagonists are usually anti-heroes to a degree; people that accept that the world sucks and being too goodie goodie leaves you open to attack… or worse, an obvious target.  Hell, that might make for an even greater challenge.  And many a roleplayer is looking for a good challenge, as are many heroes.

Plus, an extremely hostile and grim world provides you a great challenge.  Can you explore, uncover sinister secrets and survive?  This is part of the appeal behind recent video games (and also now board games) such as Dark Souls.  The lands of Lordran and beyond are hollow-blighted hellholes overseen by the faded remnants of once mighty gods.  On a similar note, the lands beyond the Sorcerer-Kings’ clutches in Dark Sun ring a similar tune.  While the City-States are dystopian nightmares overseen by maniacal warlords who have helped to screw the world beyond repair, they’re still home and can provide SOME safety.  Now, the wastes beyond?  You’re likely to go mad from the endless deserts, get devoured by mutated wildlife, get mind-raped by psychotic psions, get jumped and torn apart by savage raiders (and even scarier halflings…  Yes, that’s right, scary halflings!), get drained by undead horrors from the old world, the list goes on.  AD&D’s Athas required you start above 1st level, in addition to give you stat boosts, to cope with the horrible wastelands beyond.  And even then, it recommended that you rolled up multiple characters.  All the same, Athas is an awesome place to explore, much like the decaying ruins of Lordran.  In both cases, those who survive can uncover incredible power and fascinating lore… and darker truths.

Like many genres of fiction, there is a certain amount of perspective and introspection we can gain from darker genres.  Perhaps it can help us appreciate the good things we do have in life and take for granted.  Or maybe we can ponder what could happen should a supposedly good idea goes way too far.  In general, darker story lines open up a lot of opportunities for character exploration.  Sure, there’s always conflict in any kind of decent story.  But, how does a character endure and develop as circumstances become ever dire, towards breaking point itself?  Will they let the dark world around them prevail or will they find some means of peace, whether through fighting back or finding acceptance a la Sisyphus rolling a boulder (to reference Camus?)  And even then, what are the outcomes of their actions?  In worlds of stark, grey morality, no action is truly right or wrong.  More than likely, your good intentions have probably botched something up along the way.

Take the genre of “steampunk”.  Many gripe that there isn’t much punk to it.  Well, let’s strip away the stories of some cool dude, his flying ship and the plucky rogue that go on pulpy adventures.  Instead, we have an industrialized hell where pollution is uncontrollable.  Workers are exploited for products that few people generally need, even if some have advanced technology and society for better or worse.  These bleak circumstances that the average person faces are either ignored by or caused by bureaucrats, greedy company owners and old nobility.  On the flipside, the opposition’s good intentions to bring change often get muddled in anger, hate and a desire for revenge.  As such, riots, terror attacks and wanton violence have broken out in “lower wards”, resulting in stricter backlash from authority, as countless innocents are often killed.  However, strange steam tech is its own currency and only the most crafty and technocratic can quickly get ahead.  The protagonists are often amoral outsiders that have garnered the eyes of many curious factions eager to find an ace in the hole, though many work independently and have no qualms with undermining any powers that be.  All in all, my brief take on what I’d imagine a dark, punky dystopian steampunk setting to look like.  However, in such a setting, one could examine many harsh realities of the Victorian and post-Victorian ages; negligence of a working class, rampant empire expansion with imperialist fervor, government suppressing the concerns of their people, revolutions going too far, newer but overcrowded cities, blaming desperation on “corrupt morality”, etc.  Of course, all of this could be heavy for a group, but examining the human condition and its follies is both a part of life as well as darker genres.  Plus, one could possible gain some insight from looking at both!  Or at the very least, discover something cool. 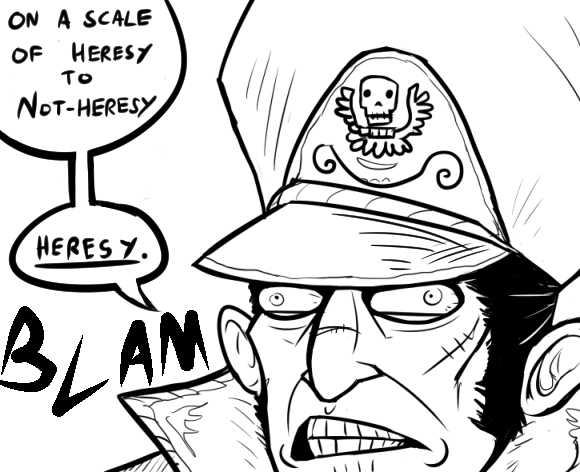 And finally, some people just like things grim and gritty!  Too much goodness in their fiction is saccharine and causes diabetes!  Muck things up and make them BRUTAL!  Dial the sheer METAL brutality up to 11!  Skull-ridden spires everywhere, gothic cathedrals in the sky, reigning missiles down from pipe-organ shaped rocket launchers, the ground littered with the bodies of countless creatures across the universe, stupid and inconsistent lore that often gets lost in its own surreal darkness, a universe and beyond locked in violence and fear!  Yes, I realize I described 40K (and for the record, I love 40K!)  But in all seriousness, some people just find a GRIMDARK aesthetic to be really cool.  I’m speaking of toxic wastelands littered with both the ruins of society and the twisted mutants that inhabit them, totalitarian bastions that give the communist and fascist aesthetics a run for their money, a pervasive sense of dread and evil in a sinister and gothic looking land, war machines tearing innocent lands asunder, the living dead overwhelming hapless civilians on the run, and so on and so forth.   Sometimes, it’s just cooler when “evil” wins, hope seems distant, safety/freedom/other desires are lost.

But, enough jabbering from me, let’s here from all of you!  Otherwise, I’ll keep babbling pseudo-philosophical musings and incoherent rantings… and few people want that!

Please, post your articles in the comments.  Stories from darker games (whether they’re roleplaying games, wargames, what have you), new RPG mechanics, looking at dark themes/genres/worlds in gaming!  Have at it!  At the end of the month, I’ll collect them for a recap post.  Go forth, meh spess mehrens!  Make da emprah proud!  You can find out more about the RPG Blog Carnival itself here!