Welcome back, weary traveler!  Please, as always, you are more than welcome to observe my inventory.  Should anything be particularly fascinating to you, signal me and I’d be happy to tell you more!  Of course, some of these artifacts are VERY dangerous and should be handled with care.  Fortunately for you, the GREAT Zam’dul is happy to provide assistance!

Author’s Note: Making magic items from around the planes remains to be one of the most fun topics for me to tackle.  As such, I really wanted to return to it so soon.  With that, enjoy another sampling of weirdness from many a reality.

The bloated flies that buzz around Lower Planes have been a deadly nasty nasty for many.  They’re capable of draining a victim dry in minutes.  Luckily, some “barmy” mages have found a way to use them for healing purposes, even transform them into helpful charms.

This crystallized insectoid glows a sickly red color.  A mixture of old blood and preserving spells circle within it, sloshing into a strange magical source.  When crushed, the power from the fly heals many wounds over time.

As an action, the user may crush the charm.  They immediately gain 3 HP.  In addition, they gain a regeneration of 1d4 HP every round for up to 30 seconds (5 rounds).

Blood, seems somewhat disgusting, I realize.  But, I assure you, only mages driven by pure pursuits made these.  These blood charms have a healing property, hardening the wound and body for a brief period of time too!

A charm in the shape of a water drop, with the color of blood.  It has a metallic smell to it.  It is said to have healing properties, akin to a healing potion.

As an action, the user may consume the charm.  They gain 2d4+2 hit points.  In addition, they have resistance to all non-magical weapon damage until the end of their next turn.

This sinister hand bell was created by members of a secret cult.  Said cult operated in the depths of a church congregation, causing dark and shadowy things to happen behind the scenes.  Unlike the sound of most bells, this one induces fear and suffering!

A metallic, bronze-colored hand bell is fastened to a black leather-like strap loop.  When rung, it emits a terrifying sound that sends a chill down the spines of victims, damaging their minds as well.

As an action, the ringer may activate the bell.  All creatures within 30ft. must make a DC 15 Wisdom saving throw.  Upon failure, the target takes 13 (3d8) psychic damage and becomes frightened for up to 1 minute.  Upon success, they take halved damage.  This effect may be used three times before having to take a long rest, in which it recharges.

A relatively small ring bearing both the symbols and crest of House Amber, a sinister and mysterious family that fled to their current estate from another realm.  It has a clean sheen reflecting off its brass surface and looks well cared for.

A seemingly useless family ring that pulses with a sinister magic power.

While attuned, the ring grants the following benefits to the wearer:

CURSE.  This ring suffers with the very curse of mania that plagued the family, themselves.  Anyone who attunes to this ring suffers the effects of one type of indefinite madness until the item is removed via a Remove Curse spell or the victim is killed.  In addition, the wearer suffers delusions related to their greatest desires on top of that.

Ohohoho, the “King of the Crosstrades”, ah yes!  She is infuriated with me.  You see, during my younger years, I had worked with some less than savory help.  They took this mirror away from her.  While most of them perished, it wound up in my property none the less.  She still doesn’t have it back.  I dislike fiends immensely, making this a satisfying victory… unless you want to buy it from me, continuing the tradition!

A decently sized mirror, framed with spiked edges and ornate designs of fangs and strange shapes embezzled throughout.  It is said to assault the soul of a victim who dares to insult an owner’s vanity.  Worse yet, it is said the victim’s soul turns against them.

As an action, the user may point the mirror at a designated target.  They must make an Intelligence saving throw, utilizing your spell casting stat.  Should the user not have one, use their highest mental stat.  Upon failure, a spectral double appears.  They share the victim’s stats, but have 1/2 of their current HP.  The double will try to kill the original.  However, if anyone interferes, it will go instantly hostile against them instead.  The user may do this once per short rest without incident.  Trying more than once will result in the user creating a double of themselves, which will then attempt to kill them instead.

Monster Jug (Rare), One use

I shouldn’t sell this to you.  Rumor has it that there’s an actual monster in this jug!  Pretty scary, I’m aware.  Now, what kind of monster is unknown, but I suspect this can only be used for nefarious purpose.  Of course, once it leaves my shop, it’s not my responsibility.

This seemingly ordinary container is crusty, old and grimy.  Its brown tone has faded over time, indicating that this was an artifact made long ago or an old jug was used for the ritual.

As an action, the user can open the jug and let a gross tar pour out.  After 1 turn, it will form into a tarry gehreleth and attack anything in sight.

Ah, this one!  This was a tool for teaching young pyromancers the basics of learning the Art.  Well, it’s the Art in regards to pyromancy…  It’s pretty rudimentary stuff taught through use of this ring, nothing too amazing.  Of course, shooting bits of flame from your hands is incredible to many…  Not me, though.

This ring feels warm to the touch.  It’s bronze casing holds a fiery gem-like stone, imbued with some minor magic.

While worn, the user may cast the Fire Bolt and Control Flames cantrips at-will.  In addition, once per long rest, the user may use Hellish Rebuke as per the first level spell.  The casting stat for the ring is either choice of Intelligence or Charisma.  If the user already casts spells, these are not added to lists of spells already known, but are independent. 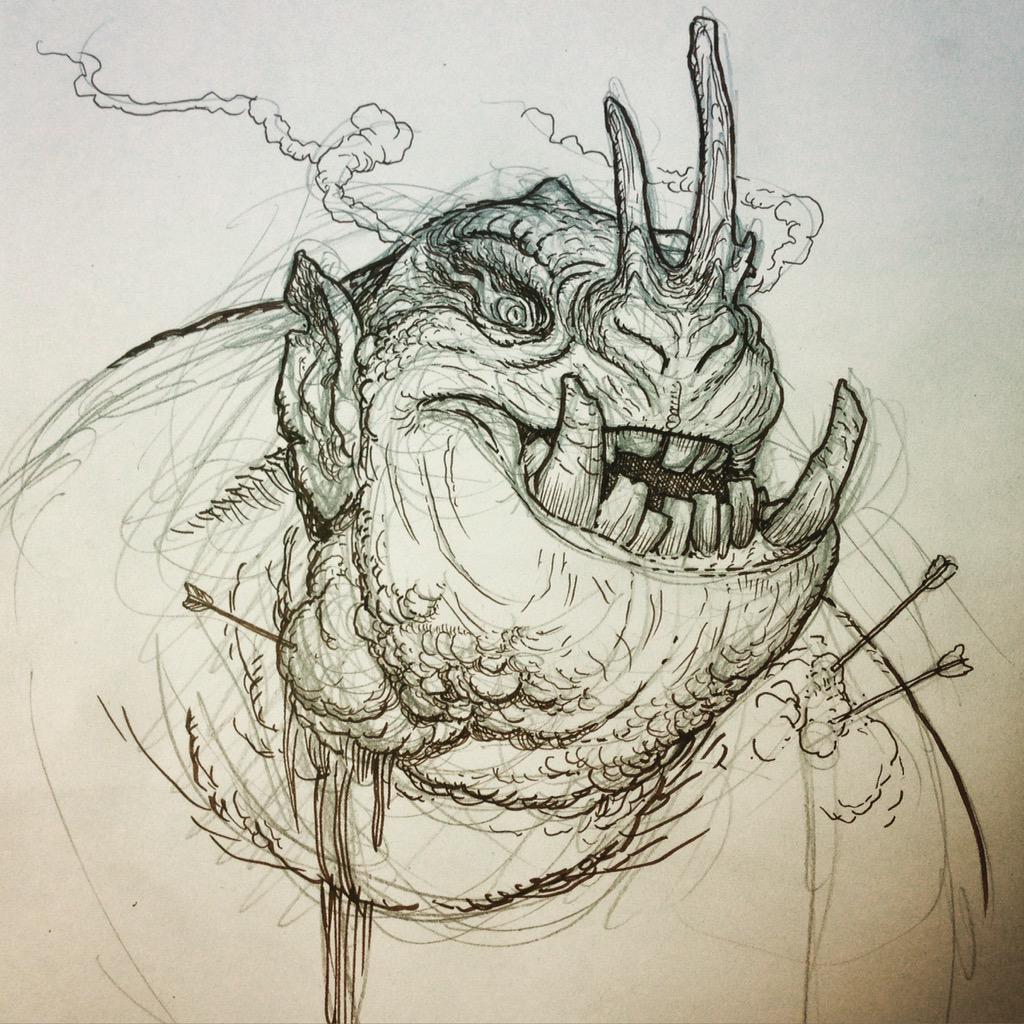 The enchanted scripts of a most peculiar and cruel fiend, Amnas the Horribly Slow.  Why are they called that?  Well, because they’d drone on at a horribly drawn out pace.  Part of this was in its sluggish nature, the other part was simply because it enjoyed causing pain in a creative way.  These notes cause a reader to act much the same way, it’s worse than being killed!  I’ve been killed a few times and I’ve had to sit through that!  Use it on only your worst of enemies, nothing less than that!

A seemingly innocent pile of manuscripts, packaged together with string and twine, held by a seal with an abyssal symbol.  Through casual reading, the text reads as a semi-coherent rambling about planes, existence, meaning and other topics… through a crude, pompous and harsh lens.  While a fascinating insight into the mind of a fiend, it quickly trails off into tangents and offensive rubbish.  It’s a chore to read by itself.  When read aloud, the magic animates, making it a true torture device.

Taking a minute to focus on the lecture, a reader can begin to recite the manuscript.  Any creature within hearing distance of 120 feet must make a Wisdom saving throw or be frozen in place and compelled to listen.  The save DC is 20 and is not affected by outside noise or distractions, as long as the victim is capable of hearing.  Those who succeed the save may still do as they please, putting the user’s life in potential danger.  In addition, those who were successful don’t need to make another saving throw from this effect for the rest of its duration.  After a short while, the affected listener will realize the lecture is awful but can’t do anything to get around from it.  Any creature that enters this zone for the first time must make a saving throw.  Those affected must endure the lecture for 8 hours time.  During this time, the item user is also locked in place, moving and speaking at an incredibly slow rate. 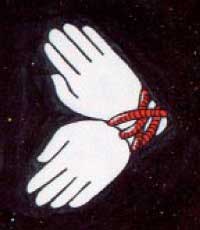 To the untrained eye, it’s just a symbol of some deity from Abeir-Toril.  It’s not just some church symbol, I assure you.  This belonged to a holy order that revered multiple gods of protection and hope, including this deity too.  These symbols were enchanted to help inspire these priests and protectors to aid those in need and allow them to suffer so others don’t have to.  It’s an admirable pursuit, just one I wouldn’t really consider, myself.  If you believe in altruism and defense, this might help you.

This metal symbol depicts a symbol of Ilmater, the crying god, on one side.  On the other, there is a humanoid slumped in a praying stance.  It glows with a celestial power, giving it a faint light blue hue.  The symbol may be worn as a necklace or kept alongside the user in some manner.

While attuned, the user gains a +2 bonus to Armor Class while defending another creature or drawing an attack away from another.  Actions to trigger this effect vary: intentionally taking an opportunity attack, buffering yourself between an enemy and an ally, drawing attention away from a weaker ally to you and the like.  Additional means of this bonus can be supplied by the DM.

Wand of Tongue of Flame (Uncommon)

While not one of his most powerful artifacts, this one carries a level of infamy.  Surely, you have heard of a deranged pyromancer known as Ignus?  In short, he burned a large chunk of The City of Doors before facing a grueling punishment, becoming a conduit for the Plane of Fire.  He still rests in the Smoldering Corpse Bar to this day as a macabre centerpiece!  He left this wand behind, unleashing one of his hand crafted spells.

This eerie wand looks like a cross between splintered bone and magma flow.  Its contrast of dull grey tones and fiery reds and oranges make it look truly sinister.

The wand functions exactly like The Wand of Magic Missiles.  However, it casts “Tongue of Flame” instead.  This spell deals fire damage instead of force damage.  Casters cannot learn the spell by using this wand.