Tales of wretched beasts, disturbing men and unspeakable evils pierce our ears and chill our souls.  Countless villages, kingdoms, continents have stories of sinister monsters that seek to end us at any moment.  Their motivations might differ or be strangely similar.  Likely born of pure wickedness, these dark spirits haunt those who get too close to their very brand of malevolence.

Many of these monsters are often accompanied by tales of caution and woe.  Those who drift too far off a righteous path are often victims of these horrors.  Those who feel they’re too good for the morals of a realm or a certain way of life should always stay careful and alert, lest they fall prey to the evil that lurks nearby… waiting, stalking, preparing…

Author’s Note:  Here’s another list of monsters, taking inspiration form creatures around the world.  Also, here’s another case where I have 2 creepy horse-themed creatures… for some reason.  Maybe I just find horses to be creepy?  I don’t know.  Perhaps it’s pent up horror caused by seeing that disturbing Archie McPhee horse mask?  I don’t know.

“We have to destroy them.  I sense pure evil in them.  No regular toy can mysteriously appear in front of me and say, ‘I’m Sylvane!  Do you want to play?’  That wretched thing didn’t have a component to make it speak in the first place…” – A letter found near a murder victim.

Languages speaks the languages of its creator

I’m Just a Cute Doll!  When the doll takes its action to use a deception check, it has advantage on all checks to make itself seem like a normal doll instead.

Immutable Form. The doll is immune to any spell or effect that would alter its form.

Psychic Absorption.  The animated doll regains hit points equal to the psychic damage it would have taken otherwise.

Magic Resistance. The doll has advantage on saving throws against spells and other magical effects.

“Beware of dislocated souls, twisted by grief and anger, for they seek vengeance upon the living in any way possible.  Through possession, they seek to cause agony and pain to those they envy the most, the living.  And through their dark abilities, they might manipulate the minds of those they haven’t even touched!” – A priest’s warning on the Dybbuk

Languages any languages it knew in life

Incorporeal Movement. The dybbuk can move through other creatures and objects as if they were difficult terrain. It takes 5 (1d10) force damage if it ends its turn in side an object.

Innate Magic.  The dybbuk is capable of using magic.  Its casting stat is charisma (Spell DC 17; Magic Attack +9).  The dybbuk may still use its spells once it possesses a subject, without need for components or requirements.

Magical Resistance.  The dybbuk has advantage on saves against magical effects.

Turning Resistance.  The dybbuk has advantage on saves against being turned.

Multiattack.  The dybbuk may use Pain Touch twice per round.

Possess Object.  The dybbuk may possess an object that is large size or small that is also unattended.  This otherwise works like the Animate Object spell.

Possess the Living (Recharge 6). One humanoid that the dybbuk can see within 5 feet of it must succeed on a DC 17 Charisma saving throw or be possessed by the dybbuk; the dybbuk then disappears, and the target is incapacitated and loses control of its body.  The dybbuk now controls the body but doesn’t deprive the target of awareness. The dybbuk can’t be targeted by any attack, spell, or other effect, except ones that turn undead, and it retains its alignment, Intelligence, Wisdom, Charisma, and immunity to being charmed and frightened . It otherwise uses the possessed target’s statistics, but doesn’t gain access to the target’s knowledge, class features, or proficiency.  The possession lasts until the body drops to 0 hit points, the dybbuk ends it as a bonus action, or the dybbuk is turned or forced out by an effect like the dispel evil and good spell. When the possession ends, the dybbuk reappears in an unoccupied space within 5 feet of the body. The target is immune to this dybbuk’s Possession for 24 hours after succeeding on the saving throw or after the possession ends.

“At first the creature was stunning and majestic.  When I foolishly rode it, I found myself stuck on an abyssal horror.  I was plunged into the murky, water depths within seconds.  I don’t know I managed to survive…” – A survivor’s account

Shapechanger. The Kelpie can switch between forms to appear as an attractive humanoid or (if in hippocampus or horse forms) a valuable steed as an action.  It can also revert to its true form, a fish-like beast that looks emaciated and warped, almost corpse-like.

Dive Deep.  The Kelpie will do all it can to drown its victims, unless there is no water nearby.  While it can survive a long time without water, it will panic if separated long enough.

Magic Resistance.  The Kelpie has advantage on all saving throws against magical effects.

Sticky Oil. Creatures who remain in contact with the kelpie for more than one minute must make a Dexterity saving throw (DC 14) or be restrained by the kelpie.  The subject will have to attempt an escape action.  The following turn, the creature must save again or become incapacitated while attached to the Kelpie.  At this point, the target will need significant help.

Multiattack.  The Kelpie may attack twice per round.

Beckoning Lure (Once per long rest).  The kelpie may attempt to call over creatures depending on the form it is in.  All creatures within listening range must make a Wisdom saving throw (DC 14) or find themselves compelled to seek the creature out.

A mixture of man and beast, a horrid protector that scours its forest home and destroys any interlopers in its way.  It has a habit of misleading and messing with others.

Change Shape.  The tikbalang can take the form of a medium or small humanoid as an action.  The race must be of a creature it has witnessed closely within a couple of days time.

Spider Climb. The tikbalang is under constant effects of the Spider Climb spell and may climb on all surfaces.

Trampling Charge. If the tikbalang moves at least 20 feet straight toward a creature and then hits it with a hooves attack on the same turn, that target must succeed on a DC 14 Strength saving throw or be knocked prone. If the target is prone, the tikbalang can make another attack with its hooves against it as a bonus action .

At-Will: Invisibility (self only), Minor Illusion

Multiattack.  The tikbalang may attack with bite or hooves twice per round. 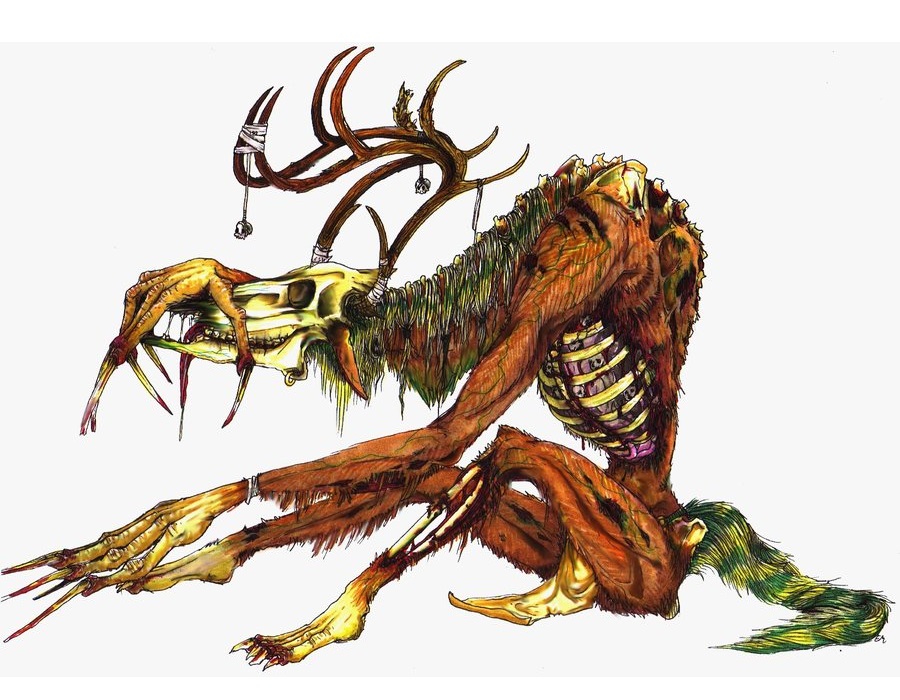 Acute Scent.  The Wendigo has advantage on Perception checks to smell.

Flesh Consumption (recharge 5 or 6).  The Wendigo may regain 2d6 hit points if it spends part of an action feasting on recently slain flesh of a humanoid.

Magic Resistance.  The wendigo has advantage on all saves against magical effects.

Wendigo Fever.  The first time a creature is hit by the wendigo’s attacks, it must make a Constitution saving throw (DC 17).  Failure results in contracting the fever.  No initial symptoms manifest until after a long rest.  Afterwards, the infected suffers one level of exhaustion per day until they eat living flesh from another creature.  Upon consuming flesh, they lose all levels of exhaustion and fall unconscious.  Over the course of 1 minute, they turn into a wendigo.  If a creature does not consume flesh and accumulates too much exhaustion, they die and return as a ghoul.  Casting Lesser Restoration, followed by Remove Curse before the creature is corrupted or dies will remove the disease.

Beware the Bouda, a dark witch who has power over the hyena!

Shapechanger. The werehyena can use its action to polymorph into a hyena-humanoid/gnoll-like hybrid or into a hyena, or back into its true form, which is humanoid. Its statistics, other than its AC, are the same in each form. Any equipment it, is wearing or carrying isn’t transformed. It revert to its true form if it dies. ·

Carrion Eater.  The werehyena has advantage against all poisons and diseases.

Keen Hearing and Smell. The werehyena has advantage on Wisdom (Perception) checks that rely on hearing or smell.

Multiattack (Humanoid o Hybrid Form Only). The werehyena makes two attacks, only one can be with its bite.

Bite (Hyena or Hybrid Form Only). Melee Weapon Attack: +4 to hit, reach 5 ft., one target. Hit: 7 (1d10 + 2) piercing damage. If the target is a humanoid, it must succeed on a DC 12 Constitution saving throw or be cursed with werehyena lycanthropy.

These werebeasts are the result of dark witchcraft and demonic sorcery.  Their habits of feasting upon the living (and the dead) have attracted dark spirits to their aid.  It was likely that these spirits cursed them with their shapeshifting powers as well.  Unlike the more standard werehyena, these creatures have a more fiendish nature.  They gain the following: